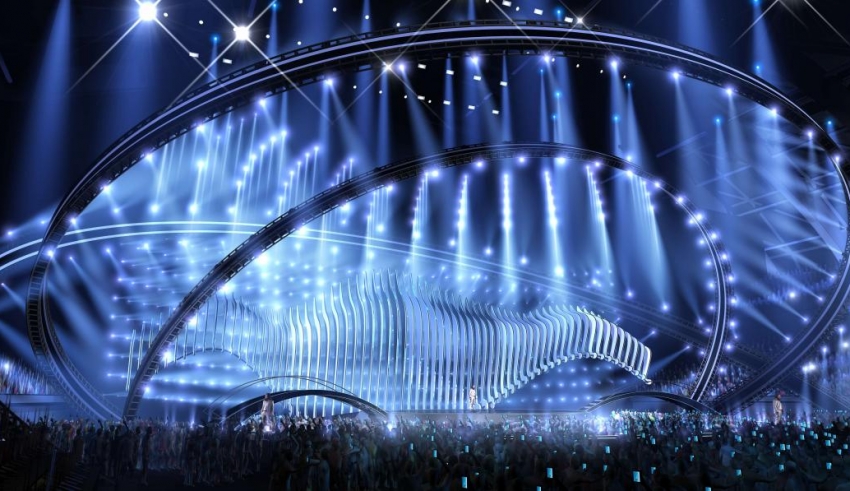 Over the past few months the Portuguese national broadcaster RTP has been building up the branding and profile of its first ever Eurovision hosting to expert precision, and today the latest in a line of exciting announcements was dropped, as the Portuguese channel revealed the ideas behind the stage design for Eurovision 2018!

The backdrop design carries through the nautical theme “All Aboard!” with an undulating wave-like structure that encapsulates many aspects of Portuguese history and culture. Florian Wieder, who also masterminded the designs of the Eurovision stages for Düsseldorf 2011, Baku 2012, Vienna 2015 and Kyiv 2017, has also drawn inspiration from the nautical armillary sphere which features on the Portuguese flag with the arcs over the stage the most prominent feature of the installation. These spheres an the wave help to solidify the four key themes behind the Eurovision stage’s design; Navigation, The Sea, Ships and Maps.

The EBU has also revealed a concept image of the stage as in previous years which can be found at the top of the article.

While these photos can be exciting, it will only be during construction of the stage in April that the Eurovision Song Contest will truly come to life once again!

What do #YOU think of this year’s stage? Is it Portuguese enough for #YOU? Share your thoughts with us on our dedicated forum HERE or join the discussion below and on social media!