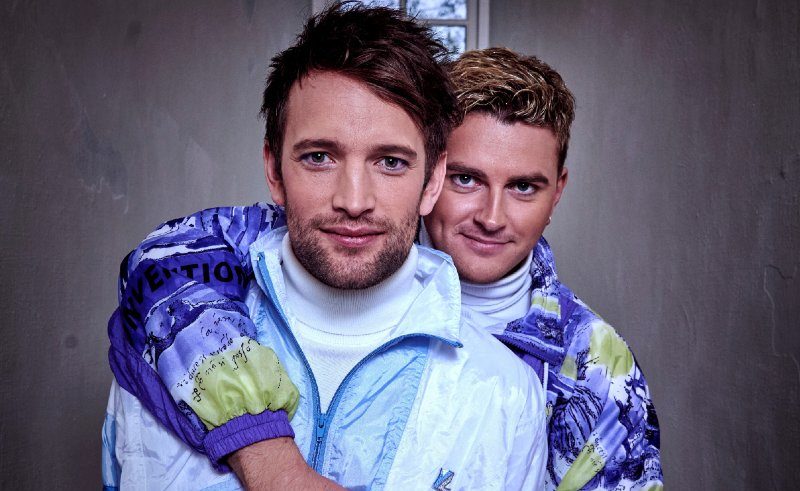 Next up, a duo that have already taken their home country by storm with their 80s retro styling, it’s Fyr og Flamme!

Who are Fyr og Flamme?

Fyr og Flamme (Fire and Flame in English) are a Danish pop music duo who have recently emerged onto the scene, consisting of singer Jesper Groth and guitarist and backing vocalist Laurits Emanuel. The duo first met in 2017 at a bar where they soon formulated ideas to begin a musical project, based on their shared love of the 80s, retro aesthetics and Dansk Melodi Grand Prix – it was fair to say Eurovision was always on the mind of the band!

Jesper (born 31st January 1989 in Ærø) is known in Denmark as a TV and film actor, having earned award nominations for his appearances in TV shows such as “I blodet”, “Journal 64” and “Retfærdighedens ryttere”. He graduated from the State Theater School in 2015 and has also worked as a comedian, often starring in satirical works in Denmark.

Meanwhile, Laurits (born 12th October 1986) is a multi-instrumentalist has been working in the Danish music industry for a little while now, having been a lead singer for The Grenadines and a graduate of the Danish Music Conservatory. He is also able to play the drums alongside guitar.

The duo officially formed in 2020 and were overnight successes, with their debut single “Menneskeforbruger” (Maneater) reaching number one on the P3 Listen Danish chart in September and #12 on the Hitlisten Danish charts. The success of the song also earned the group a contract with Universal Music. In an interview with DR, singer Jesper told of his surprise at the instant success; “We had not expected at all that all this would happen. I knew very well that it was a good number, but not necessarily that it was an earworm”.

Their follow up single, “Kamæleon” (Chameleon) was an even bigger success, reaching #7 on the charts and saw the band start to cement their style as a successful one in their home country.

The band has always sung in Danish; “We make songs according to Scandinavian traditions. I cannot imagine at all how we should be able to translate our songs. We are quite brave with the language in our lyrics, so maybe people think: “God, do they sing that? It must be too funny”. But if you take some of the Danish artists who sing in English and translate their stuff into Danish, then they sing things that are even wilder and silly than our lyrics.”

Jesper and Laurits have also stated they are committed to the project long term, with Jesper going on record to say “People really want me to choose between acting and music, but I’m not going to. Once we have rehearsed and played some shows so that the songs sit on the backbone, I can easily go on recording during the day and play a concert in the evening.”

How did Fyr og Flamme get to Rotterdam?

It was not Fyr og Flamme’s first attempt to represent Denmark in the contest, and it has always been an aim for the duo separately to join the competition.

The duo submitted an entry for the 2018 edition of Dansk Melodi Grand Prix before they were officially known as “Fyr og Flamme”, but the song was rejected by the broadcaster DR. Rasmussen would instead represent Denmark that year with the Viking-inspired “Higher Ground” in Lisbon.

Danish national broadcaster DR confirmed that Dansk Melodi Grand Prix would once again be used to select the Danish entry for the Eurovision Song Contest, with no guaranteed slot for 2020 participants Ben & Tan.

A submission period for entries was opened in late October and closed on 20th November, with artists and composers invited to submit songs. It was said that DR would seek out “songs that reflect Danish culture and identity with a diversity of both genres and musical expressions” and with an emphasis on songs that the committee felt could have a life of their own outside Eurovision.

Fyr og Flamme were announced as one of the eight acts to take part in the selection on 10th February 2021, with the song “Øve os på hinanden” (Practice on each other) written by Laurits Emanuel. Also participating in the competition were X Factor alumnus Jean Michel and legendary Danish rock and glam metal singer Mike Tramp. Ben & Tan did submit a song for the contest, but it was rejected by DR, meaning that a new face would fly to Rotterdam for the Danes.

Dansk Melodi Grand Prix took place on 6th March 2021, and was the second year in a row that the competition had no audience. Chief 1 & Thomas Buttenschøn, Jean Michel and Fyr og Flamme qualified for the superfinal on the night, with the latter earning 37% of the televote and narrowly winning DMGP 2021. As a result, Fyr og Flamme were chosen to go to Rotterdam for Eurovision 2021.

Shortly after their victory, the duo confirmed to DR that their song would remain in Danish, thus marking the first time since 1997 that Denmark would send a song entirely in their native language to the contest.

How have Fyr og Flamme been preparing for Eurovision since selection?

The day after their victory in Dansk Melodi Grand Prix, the duo announced a number of performances in Denmark for later in the year; Aarhus on 27th August, Copenhagen on 2nd September, Odense on the 10th and Aalborg on the 11th.­­ The winning entry also went straight to number one on the Danish Hitlisten, making it the first chart-topping Danish entry since the 2013 winner “Only Teardrops”.

On April 14th, it was confirmed that the band were nominated for the Zulu Award for “Best Newcomer of the Year”, teasing their fans with a new single if they were to win the accolade. They did go on to win the award on April 29th and subsequently released a new song entitled “Kæreste” (Boyfriend/Girlfriend) the day after. The band performed their first single “Menneskeforbruger” at the Zulu Awards, on a cherry picker.

The group arrived in the Netherlands on May 10th to begin rehearsing for the Eurovision Song Contest.

What do #YOU think of Denmark’s entry for 2021? Share your thoughts on this article in the comments below, on our forum HERE and on social media!