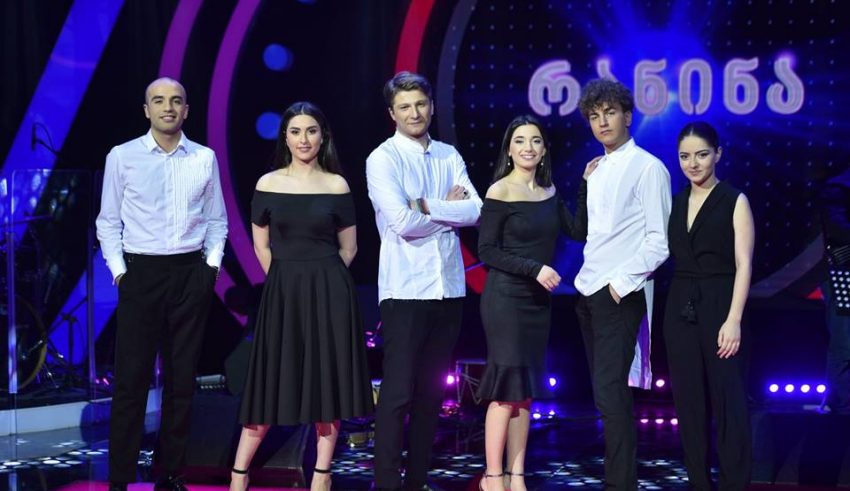 It’s the Georgian movie tour on this week and next week’s რანინა (Ranina), as the ten contestants are this time asked to sing songs from famous Georgian movies with the assistance of Georgian jazz sextet The Quintessence.

Four “tours” of different themes will be completed by all ten contestants over the span of eight weeks. The five contestants with the best scores accrued from the three member jury (This judges being David Evgenidze and two different guest judges for each round judging the contestants in points out of ten on vocals, artistry, involvement, and performance) will move on to the semi-finals, and from there three finalists will be selected for the final where the winning performer and internally selected song will be chosen.

First up, 9-year-old Barbara Imnadze led The Quintessence with “Chito-Gryto,” from the classic 1977 comedy Mimino, about a Georgian helicopter pilot aspiring to fly the supersonic Tupolev Tu-144 and an Armenian truck driver mistaken for a college professor and their comedic antics in Moscow.

Next up, and from the 1959 film “Maia Tskneti,” the youngest competitor in 8-year-old Anastasia Garsevanishvili led The Quintessence with “Mate Bich’is Simghera.”

Third up, and standing out from The Quintessence in a bright red pantsuit, 10-year-old Elene Ivanidze performed the titular song from “When Almonds Blossomed,” or როცა აყვავდა ნუში, the 1972 Georgian coming-of-age drama.

Tune in every Sunday at 20:00 Georgia Time. Ranina is available for viewing live on Ranina’s facebook page.

In Junior Eurovision alumni news, the official video for Nevena Božović’s Eurovision 2019 entry for Serbia “Kruna” dropped this week. The brooding Balkan ballad also received a revamp, and is a favorite to qualify from its Semi-Final and has been praised for Božović’s performance, particularly how she has matured as a performer in the past six years, and a “strong and powerful chorus,” despite some criticism over the randomly dropped English in a mostly Serbian ballad and the clunky blending of the acoustic and electric guitars into the mix.

“Kruna” is, as we know, not Božović’s first attempt at Eurovision. She was one third of Moje 3, whose dance track “Ljubav Je Svuda” failed to qualify for the Eurovision 2013 final in Malmo, Sweden, coming in 11th in Semi-Final 1. Though the song did not qualify, there was a lot of excitement in Serbia when Božović came to Beovizija 2019. This year’s Beovizija was a tough field, and Dženan Lončarević ran Božović close, only slightly beating her in the televote. But Božović squeaked through by winning the Jury vote and earned the right to represent Serbia in Tel Aviv, Israel.

But to the point of this article, where we at ESC United point out the merits of keeping an eye on Junior Eurovision by highlighting the careers of those who have performed there before, Božović is also remembered for her third place performance at Junior Eurovision 2007 in Rotterdam, the Netherlands, with “Piši mi.” A fondly remembered ballad, her maturation as an artist and performer is evident here, particularly with how she now commands a stage relative to her static while wearing a silk flat cap performance here. Performers forged in the fire of Junior Eurovision go on not only to represent their countries in the adult version, but also have successful careers in their home countries and in some cases, internationally.

And in ten years, if you see an Ana Berishvili or a Nika Petriashvili performing on stage, you can always be that person who says you saw them at Ranina and read about there here first.

Which one of the Ranina contestants has impressed #YOU so far? What do #YOU think of Nevena’s “Kruna” video and revamp? Comment below, in our forum, or on social media.