Home 2019 Lithuania: Our reviews of the Eurovizijos Atranka entries – Semi-Final 2 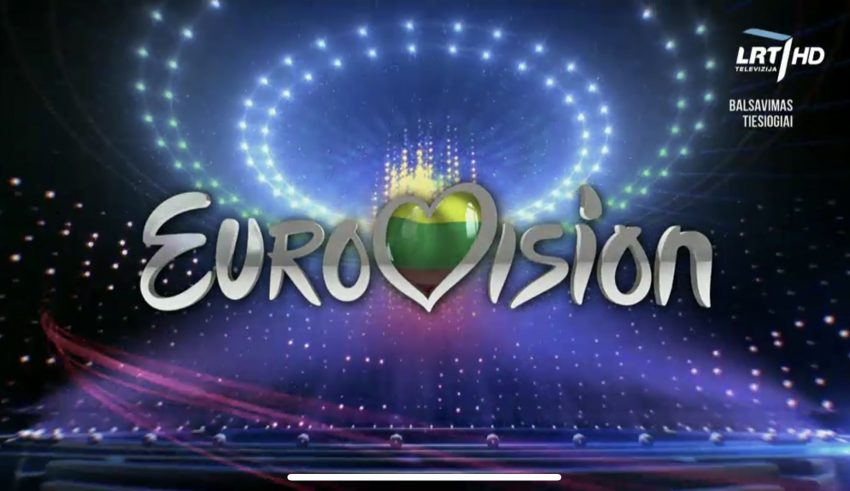 The second semi-final of the Lithuanian selection takes places today, and with the competition hotting up the stakes are higher than ever. Who should reach next weekend’s final? Our team took a look at the entries…

James – 8 – “I don’t care what people will say about this old guy picking up his guitar and giving us Tom Petty-esque 1970s classic rock, this is fun. He has to get rid of the Michael Moore hairdo, though. He looks like he’s been sleeping in the back seat of an old Soviet era van for the last 30 years, honing his sound so he could deliver the middle-aged existentialist track we have today. It asks big questions (where is our “train” headed at this stage of our lives?), but the sort you’d gladly talk about in a grubby nightclub in the rougher parts of Vilnius.”

Sean – 4 – “Listen, this is hella simplistic. And I mean, it’s charmingly simplistic. Šarūnas is very likeable and brings a lot of positive energy to the staging. But this just isn’t the one for Lithuania this year.”

Aldegunda – I Want Your Love

James – 9 – “Fun, sensual Latin(ish) flair delivered by a Brigitte Nielsen look-a-like! I love this song, and I love the audience interaction, almost cabaret-like. It is no surprise this won the televote in Aldegunda’s heat. I have no idea why the judges picked several joyless dirges above this. I am certain non-Lithuanian judges will be more forgiving. Sure, the “I Want Your Love” is a bit repetitive, but this is a fun up-tempo booty call acoustic song. I’ve seen a bit of kerfuffle online about the lesbian or bisexual wordplay, but this works for anyone really. Believe or not, lesbians can be fun too, unless you’re playing darts against them at GYM Sportsbar in West Hollywood – if that bar could turn off Madonna for a minute, “I Want Your Love” would go down a treat there as well as in Lithuania.”

Sean – 4 – “A Latin inspired entry in Lithuania? Truly the country of surprises! The lyrics are pretty poor and the vocals aren’t much better, but this is a fun song and will surely bring a party atmosphere for the Lithuanian audience.”

James – 3 – “A husband and wife doing a kindergarten sing-a-long. I can appreciate some effort to get the Eurovision audience to sing along and clap and cheer, but this cajoling is too much. It’s also way too basic. Every line is a version of “when you’re stabbed behind the bins… SING!” “When a dinosaur eats your face… we need you all to SING!” Repetitive and annoying.”

Sean – 6 – “Hey, it’s the guy from InCulto! And he’s brought another great track to bless the nation of Lithuania with. While it may not have the layers and impression of “Eastern European Funk”, “Sing!” is an upbeat crooner that sticks in your head a lot longer than it probably deserves to. Decent effort!”

James – 1 – “These six (five women and one guy) harmonize well, but come on, after Jurgis and Erica cajoling us into singing with a terrible song, we’ve got another group cajoling us onto our feet to sing along. Has Lithuania been overrun by Baptist camp counselors this year? When you’re demanding “you should clap for me” you’re just begging for the middle finger. How on Earth did the judges prefer this over the satanic dancer amongst the wood nymphs number in Tiramisu’s “The Smell of Your Eyes” in Heat 2? That song was insane, but I’d take that over a bunch of happy clappers pestering the audience.”

Sean – 2 – “There’s a bit of a misnomer here as there’s nothing original about this entry! The voices of the five blend really well and they have great stage presence but there’s only so much you can do to mask a naff song. It’s just so basic and as beige as their outfits…”

James – 4 – “A generic pop song. For a song with “Kiss Me” and “Hold Me” all over the place it is very antiseptic. That is my guess why the judges liked it but the televoters hated it. This is something you hear year in and year out at Eurovision. But guess what, Lithuania, your public wants love with the passion and playfulness of Aldegunda’s “I Want Your Love,” not this overly processed, overly produced modern pop. And while Paola can sing, there were a few mistakes in her performance, which probably explains the excessive vocal modulation in the recorded version. She will need to up her game for Prime Time.”

Sean – 6 – “As power pop ballads go this is a pretty good one. The backing track in the verses is good thanks to its spacey, sparse nature but the choruses suffer from the modern production technique of layering extra sounds in for the sake of it. Overall this is a solid but uninspiring entry.”

James – 5 – “Sounds like a mid-90s novelty dance song blending dance with folk elements. But more the Rednex / Macarena variety than the Enigma variety. My biggest problem with this is not that it is a novelty song about loving your car performed by what looks like a group of Lithuanian soccer dads, it’s that I would not have been surprised to hear this play at a wedding reception in Pittsburgh in 1997.”

Sean – 5 – “Thank god for copy paste. To the song, it’s hard to place this but I’m going to go for aborigine dubstep ska pop. Whatever it is, these guys are comfortable in their own niche and if they won you’d be hard pressed to find a similar song in Tel Aviv which can only work in their favour!”

James – 3 – “The beatbox at the bridge does little to lift a flat and dull adult contemporary electronica environmental screed. This is not what I expected from a band called MaNNazz – instead of gloriously over the top raw male sexuality of a Cazwell, we get Sinead O’Connor with a beatbox. And why is the bird blind? Is it an homage to Netflix’s “Bird Box?” This seems to have a lot of fans, and I am at a loss as to why. Yes, the female vocalist is great, but with all these “don’ts” in the lyrics it feels like we’re being lectured.”

Sean – 6 – “I’ve heard many tracks that have this dark, sultry, brooding feel to them, but not many of them break down into vocal wobs and ad libs in the way this one does! “Blind Bird” is a surprisingly good, minimalistic song but I don’t think it’s one that could go all the way.”

Jurijus – Run with the Lions

James – 6 – “This is teetering on the edge of ridiculousness, especially with the effects mimicking “African” warrior chanting and stomping. Jurijus, who looks like the love child of Harry Connick, Jr. and Falco, is a handsome ham who does seduction very well and he’s got a great voice. If he wants to uncage us and have us run with the lions, the song needs a revamp: ditch the distracting “African” effects, concentrate on giving the chorus more power, and amp up the sexiness.”

Sean – 8 – “Jurijus has a fantastic vocal on him that reminds me of Wild Beasts lead singer Hayden Thorpe, with the fragile falsettos and big bursts of energy. The song is a little repetitive towards the end but the performance is captivating and Jurijus creates a strong overall impression.”

James – 1 – “No-one gave you any advice, eh? Oh, I got a few bits for you. This lyric is creepy: “I’m playing alone, that’s what really turning me on!” The rap bit does not fit in with the song. The acoustic guitar with rap bridge is old hat. Actually, the rapper is a better singer, so ditch the first two verses and keep the bridge, build a song around that. And the second verse where you send your “baby” home and launch into the “I’m playing alone” part is just awful – who wants to tell Eurovision that you’d rather jerk off than be with a girl? And what’s this “young white boy with a beautiful soul” nonsense? Jeez, is this Eliot Rodger’s “Supreme Gentleman” manifesto in song form?”

Sean – 3 – “Ehh. For a song that has an impromptu rap in the middle of it there’s really not a lot to report on here. It’s not quite indie pop and not quite rap, so it suffers from an identity crisis and doesn’t offer enough with either.”

Zivile Gedvilaite – Learn from Your Love

James – 5 – “Is this Tomi Lahren look-a-alike entering Lithuania’s national selection with a basic built for Eurovision romantic ballad (Eastern bloc version)? The song is basic and Zivile is trying way too many vocal acrobatics to compensate for a paint-by-numbers track.”

Sean – 1 – “Oh god no. This is just all wrong, the tone of her voice doesn’t sit right with me and this all seems more like a vocal exercise rather rhan an actual serviceable song. This is pretty poor I have to say.”

James – 10 – “I am probably going to get a lot of flak for this, but Alen Chicco’s “Your Cure” is the anthem we need in 2019. He is daring, avant garde, with just the right amount of crazy. Not at all what you expect from an X Factor alumnus. Alen is an unpolished diamond in the Lithuanian rough, but his performance in the Heats was fantastic. Sure, it pushes the taste boundary with him “curing” a dancer in a wheelchair with his love. Alen’s drag looks like Kesha dressed as a human resources manager at a Midwestern faucet company in 1987. His dancer is also the right amount of crazy. But you can’t take your eyes off these two maniacs. “Your Cure” brings to mind that period in the 1980s when the art world influenced pop (Andy Warhol and Jean-Michel Basquiat influencing musicians of the era such as Grace Jones, David Bowie, etc.) and we ended up with up-tempo new wave high-concept product. Lithuania, if you send Alen, and he and his dancer refine the rough edges of their choreography and Alen’s costume, you will create a legend at Tel Aviv!”

Sean – 7 – “This is the one that has everyone talking. Performance aside, this is a standard pop song that explodes into an intriguing electropop anthem in the choruses that really elevates the whole package. Alen is an accomplished performer and carries this well, but perhaps we don’t need the yelps at the end.”

James – 5 – “Her “Light On” is much, much better. If Lithuania picks one, please go with “Light On” and not this generic ballad found in the Azerbaijan 2015 – 2018 scraps bin. Marija is a major talent, but I’m guessing the Lithuanian organizers tacked this on the end of Semi-Final 2 while people are still concussed by Alen Chicco as a tip-off they prefer “Light On,” too.”

Sean – 3 – “This is so criminally by the numbers and beige that even Monika herself seems to have given up on this song. It’s no wonder – there’s really nothing special about this song and it’d get lost in what is shaping up to be s strong field in Tel Aviv.”

As #YOU can see, Alen Chicco is our favourite from this semi-final! But will the right acts be joining the final next weekend? We’ll find out later this evening!

Who do #YOU want to represent Lithuania in Tel Aviv? Share your thoughts with us on our forum HERE or join the discussion below and on social media!