Home 2020 Lithuania: A Tale of Two Monikae – A recap of the second semifinal of Pabandom is Naujo! 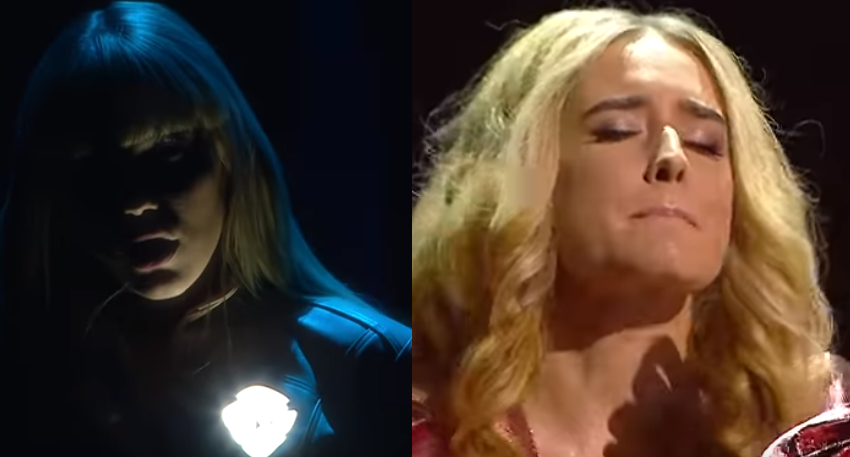 Here we go again, for another Saturday of Eurovision recaps. Tonight we heard the second semifinal of the Lithuanian national selection “Pabandom is Naujo!”. The Lithuanian national final has proven to be the revelation of the season so far. Did tonight hold up? Here’s a a recap of what happened.

Our Lithuanian Kollig Kaj stormed on the stage in his trademark yellow-blue VANS, brand-new jacket and blue-ass pants and immediately set a standard with a well-executed, slick, tongue-in-cheek performance. The colour palate was once again an eye-watering shade of omelette yellow, but the semi final performance appeared better than the one we saw in the heats. The jury agreed, ranking him third, giving him a ticket for the finale.

Petunija exchanged her frizzy carrot top hair for a glam wavy coupe. Her performance saw a few adjustments however. Doused in a green light and flanked by a trio of backing bimbettes, the Lithuanian muze suavely showed us how she planned to make Lithuania famous. Unfortunately, despite her efforts, Petunija failed to convince either vote of her valiant efforts, leaving her stranded in the semis.

Germanas’s performance in the third heat appeared to be plagued by chaos, but it appears he got his act together this week, improving on vocals and harmonizing better with his backing vocalists. This clear improvement almost ended up in a shock qualification, with The Backs barely edging out Germanas, who reached an impressive 4th place with the juries. Not bad for somebody who stumbled their way through the heats despite being 7th in both votes.

Monique was the hot favourite going into this semifinal. For the occasion she adopted a fringe to prevent herself from eating her own hair. The performance she gave radiated passion, throwing looks in every camera and throwing her body around the floor. Unfortunately, this increase in intensity also caused her to be a bit vocally underwhelming – most notably singing out of tune and failing the high note in the middle-eight. However, despite experiencing an off-day, Monique still managed to dominate the televote and did very well in the jury vote as well, claiming tonight’s silver medal.

Rokas had a more elaborate start to his performance – instead of making his bass player mime his lyrics, he started out seated on a rug, in front of a dusty old television, his acoustic guitar to the side. After lamenting there was nothing on tv for lonely guys, he grabbed his guitar and gave a solemn performance in line with the melancholic score of his song. This performance definitely put the music first and the anti-Eurovision sneers second. The audience seemed to like it, but it left the juries somewhat unimpressed.

Much like Aiste last week, Monika made no important changes for her semifinal performance. It was the same flash of country riffs, puff sleeves and blonde hair extensions and the Lithuanian singer-songwriter provided perhaps the most powerful vocals of the evening.  Her confidence in her previous staging proved justified, as her solid, reliable rendition of “If I leave” ensured Monika the gold medal of the semifinal, narrowly beating out the other favourite (Monique) in the jury vote.

Andy Vaic on the other hand completely revamped his performance. Now flanked by dancers, the Oxford graduate flounced around the stage with flair and finesse. It was a dope lametastic, fun ride. Sadly the vocals still required a lot of work. Despite clearly trying his hardest to sell his performance Andy failed to impress either vote, finishing last overall. Back to Oxford University we go, sophomore boy.

The Backs went on last, in their trademark positions. Standing in a slightly arched line, hats ready to be thrown, notes ready to be hit with precion. Unfortunately, the girl group was not as in synch as they had been before, missing a few notes here and there. However, while the jury held this against them, the audience was more forgiving, providing the ladies with just enough televotes to reach the finale.

Tonight featured only eight acts, after Evgenya Redko had previously dropped out due to acute back hernia. Later, the points were announced, and this is how the jury vote went: 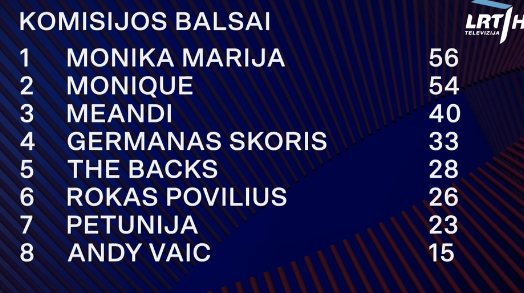 It was neck-to-neck between the Monikae, but in the end it was Marija who won out, barely edging out Monique by two points. Meandi clocked in third with a decent 40 points, with Germanas being the last jury qualifier with 33 points. Andy Vaic was last. 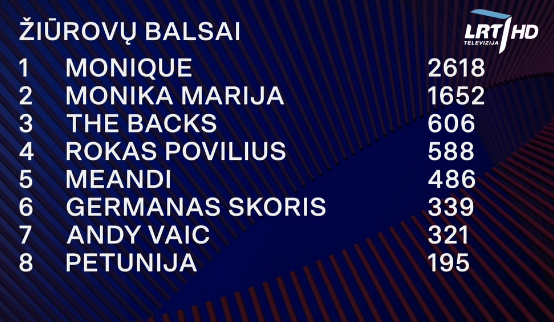 Despite having an off-day and appearing in the first half of the semifinal, Monique easily crushed the televote, beating Monika Marija by slightly under a thousand votes. The Backs, who were on last last reached third, another thousand votes behind Monika Marija, edging out Rokas by a tiny 18 vote margin, who reached 4th place. Petunija finished last.

Once combined, with the jury vote as the tiebreaker, the following qualifiers were announced: 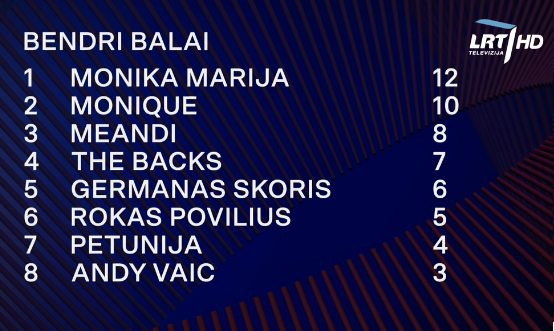 Winning the jury vote over Monique allowed Monika Marija to grab the precious gold. Meandi and The Backs, who finished third in the jury and televote respectively, round up the top 4.

This means the eight remaining acts for Lithuania are: (in no particular order)

We will know the identity of the winner next week, on the 15th of February. See you until then.

What do #YOU think about tonight’s show? Do you think they picked the right songs? Let us know in the comments, on social media, or on our forum!