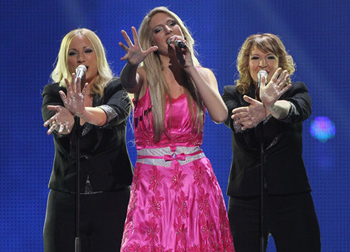 What components make up a memorable and successful Eurovision Song Contest entry?  In the recent era of Eurovision, there have been a number of strategies entries have utilized, including:

These components pertain more to the performance than the song. But if there is one song-writing strategy that every Eurovision fan knows about, it’s the KEY CHANGE. For those of you needing examples, check out my personal favorite uses of key changes (“In a Moment Like This” – Denmark 2010 and “Je Ne Sais Quoi” – Iceland 2010). Like many other songs, these songs switched to a higher key in the last chorus to help give the performance a nice climatic finish.
As I was chatting with fellow blogger Matt, we talked about how predictable key changes in Eurovision had become. And then it got me thinking…how often do key changes actually happen in the Eurovision Song Contest? In this article, I summarize the prevalence of key changes in songs of the Eurovision Song Contest from 2000 to 2012. I was also curious to see if a song with a key change had an advantage over songs without key changes, in terms of qualifying into the Final or obtaining a great score in the final.
For this article, I re-watched all the performances of the Eurovision Song Contest from 2000 to 2012 and noted if there was a key change or not. I verified my final tally with fellow blogger Matt, in order to make sure I wasn’t hearing things wrong. After he reviewed my list, he let me know he had no disagreements with what songs I believed used key changes.
From 2000 to 2012, there were 460 entries in the Eurovision Song Contest. Of these 460 songs, 201 (43.7%) included key changes. The year with the largest percentage of songs with key changes was 2003 (61.5%). The lowest percentage was in 2012 (16.7%). Three of the thirteen winners in this time had key changes (2000, 2001, and 2007).

As seen in the graph above, there appears to be a downward trend in the percentage of songs with key changes.  In particular, this decrease is most evident in the past four years of competition,  One thought I had was perhaps this downward trend showed signs of stronger songwriting, where songwriters felt that they did not need to rely on a key change to help their songs out.  A good song was a good song.  Hence, key changes have become less necessary.  Another possibility is that the songs have been overshadowed by the performances.  Not having a key change may let the singers focus more on the choreography (and remembering the lyrics – on that note, has anyone ever forgotten their words on stage?!).

One final thought I had about this was that perhaps the introduction of more countries and the semi-finals in 2004 perhaps played a role.

The last thing I wanted to examine was a possible association between key changes and Top 5 or Top 10 finishes.

The graph above depicts the percentage of key changes in songs that finished in the Top 10 (black line) and the songs that did finish in the Top 10 (red line).  Note that this graph does not account for songs failing to qualify for the finals. The differences in the later years are now less obvious, and the lines are now a bit steadier.  However, it still appears that in 2000 to 2002, a considerably larger percentage of top 10 finishers used key changes.  So as seen in the Top 5 finishers graph, key changes could have been influential in voting in the early 2000s.  But they are not as now.

It appears that in the Eurovision Song Contest, key changes are not as common of a songwriting strategy as they used to be. Moreover, the lack of distinctions in the more recent Eurovision Song Contests between Top 5/Top 10 and non-Top 5/non-Top 10 finishers may suggest that key changes are not needed to get the attention of the voting public and the jurors.  One rationale that may explain the downward trend in key change prevalence, and the lack of difference between high and low scores, may be that juries simply loathe them.  The juries have a lot more power today than they did 10-12 years ago.  So the voting public may reward songs with good key changes, while the juries do not.  So perhaps the trends reflect that songwriters may be aware of the juries’ possible distaste for key changes and avoid using them altogether.

For this article, I was unable to examine the jury and voting results separately.  But if anyone has any thoughts or information about the usage of key changes in the Eurovision Song Contest, I’d love to hear from you!