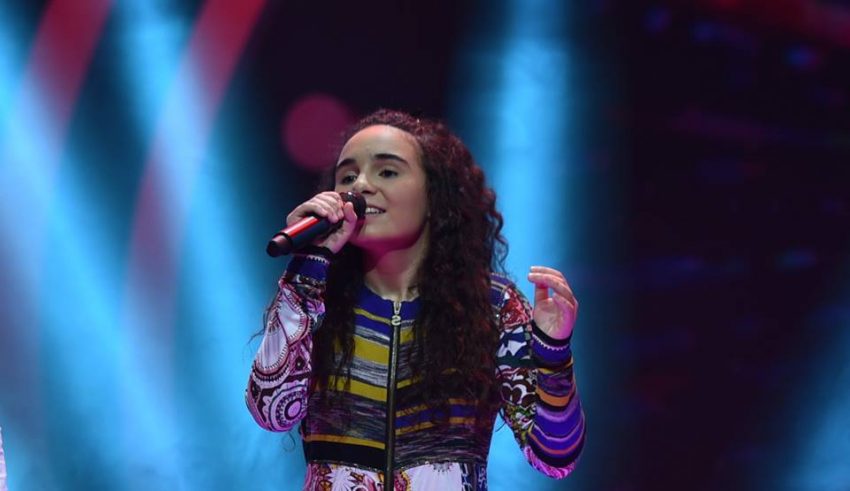 It’s the second week of the Georgian movie tour this week on რანინა (Ranina), as the ten contestants are this time asked to sing songs from famous Georgian movies with the assistance of Georgian jazz sextet The Quintessence.

Four “tours” of different themes will be completed by all ten contestants over the span of eight weeks. The five contestants with the best scores accrued from the three member jury (This tour’s judges being head judge David Evgenidze and guest judges Rezo Kiknadze and Maia Dutanishvili judging the contestants in points out of ten on vocals, artistry, involvement, and performance) will move on to the semi-finals, and from there three finalists will be selected for the final where the winning performer and internally selected song will be chosen.

And that process is going very well. Social media in Georgia and beyond is buzzing at the level of skill the ten contestants have shown over the past six weeks. Mariko Lejava, who did a duet with Anastasia Garsevanishvili in the first week, was effusive in her praise of the ten kids on display after last night’s episode of Ranina. Evgenidze, as has happened before, was moved to tears over a performance, and Georgian social media believes that in this batch of Ranina contestants, they have a special class of young singers. Georgia has been going for the kill at Junior Eurovision ever since their debut in 2007, but with this batch they believe they have their best audio assassins yet.

Perhaps the most well-received performance of the night was by 12-year-old Giorgi Rotiashvili, who proved he could hold his notes, and selected a great song that showed off why The Quintessence is as well regarded as they are in Georgia. The interplay between the band and Rotiashvili on “Berikoba” is something to behold.

Tune in every Sunday at 20:00 Georgia Time. Ranina is available for viewing live on Ranina’s facebook page.

In other Junior Eurovision news, Giorgia Borg, who came in third in Malta’s National Selection in 2018 with “10,” managed to land the coveted Golden Buzzer from judge Alesha Dixon on Britain’s Got Talent.

The British tabloids, as is their way, managed to drum up outrage because Borg had the “temerity” to perform the exact same song she did at the Maltese national finals for the Britain’s Got Talent panel. Apparently to readers of The Sun (though “readers of The Sun” is an oxymoronic term, and one to throw in Britons’ faces every time they get in your face about that statistic they read more newspapers than Americans), Borg’s performing “10” for a different audience is somehow disqualifying.

But none-frothing-at-the-mouth viewers of the show were impressed, and as of Saturday night, 4 million viewers had seen Borg’s performance of “10” on YouTube.

Malta’s Junior Eurovision alumni have form in turning out for Britain, as Junior Eurovision 2015 winner Destiny Chukunyere herself got the golden buzzer in 2017 on Britain’s Got Talent before being eliminated in the Semi-Final. We shall see in the upcoming weeks if Borg can top Chukunyere.

Who impresses #YOU on Ranina? What do #YOU think of Giorgia Borg’s turn on Britain’s Got Talent? Let us know in the comments below, on social media, or in our forum.