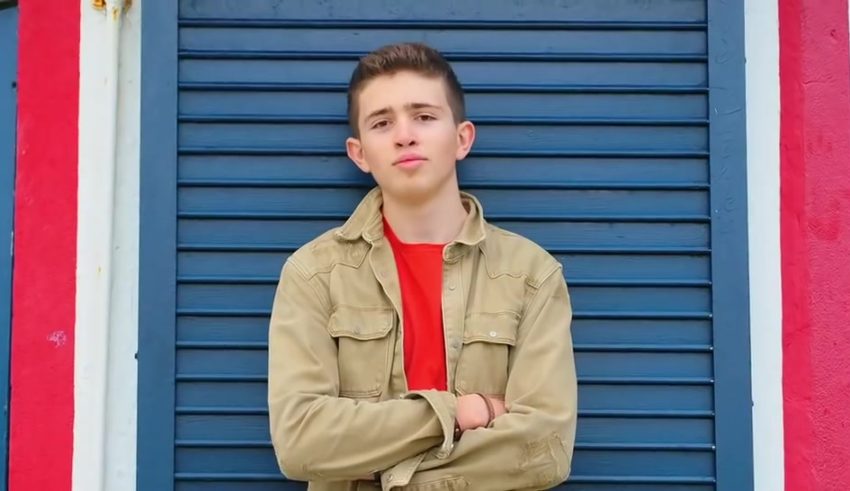 Maiú Levi Lawlor, playing it cool in the official music video for "Saor".

As previously reported, 13 year old Maiú Levi Lawlor will represent Ireland at this year’s Junior Eurovision in Paris. He won the honor on Junior Eurovision Éire, broadcaster TG4’s national selection show. At the time of his victory, the song he would ultimately be performing at the contest was unknown. That changed today with the release of the official music video for “Saor”, translated in English as “Free”.

The lyrics of the song, sung primarily in Gaelic, are about the experience of school-aged children during the last year and a half of lockdown.

“For more than a year, time stood still, without friends or school or anywhere to go.”

The official music video underlines this message with shots of every day sights, including water running from a faucet and a flock of birds flying overheard, frozen in time. Ultimately, the song ends with a message of fun and freedom.

The creative team behind “Saor” boasts a number of notable talents, including a few contest veterans.

Lyricist Niall Mooney was on the songwriting team of three of Ireland’s past Junior Eurovision entries, including Anna Banks‘ inaugural Irish entry “Réalta na Mara”. Additionally, he co-wrote Ireland’s 2009 and 2010 Eurovision entries. The 2009 entry, “Et Cetera”, was performed in Moscow by Sinéad Mulvey & Black Daisy. LA Halvey, lead singer of the now-defunct Black Daisy, is also a co-writer on “Saor”.

Brendan McCarthy is returning to Junior Eurovision for the second time, previously collaborating with Niall Mooney on Ireland’s previously-mentioned 2015 entry. Interestingly, both McCarthy and Mooney are members of the recently reunited rock group Candy’s Room, a fledgling band that gigged around Dublin in the early ’90s. The group originally disbanded in 1994, but are currently in the process of creating a remastered and re-recorded album of previously unreleased songs from the band’s heyday. “Saor” was originally intended to appear on that album, but was significantly re-written and translated into Gaelic before it was submitted for Junior Eurovision consideration.

Composer Cyprian Cassar has his hands full. The EDM DJ, who previously collaborated on Malta’s 2018 Junior Eurovision entry ‘Marchin’ On’, is also on the songwriting team behind Ike & Kaya‘s “My Home”, Malta’s entry at this year’s contest.

Lastly on the songwriting team is Lauren White Murphy, an actress, prolific ghostwriter, and fine artist who has most recently served as an ambassador for the Multiple Sclerosis Society of Ireland since first being diagnosed in 2018.

As previously mentioned, Ireland made its first appearance at Junior Eurovision in 2015. Zena Donnelly’s 10th place finish at the 2016 contest with her song “Bríce ar bhríce” remains the country’s best finish. Due to the pandemic, Ireland did not participate at the contest in 2020.

What do #YOU think of Ireland’s song this year? Can the country turn around its string of bad luck? Sound off in the comments below, in our forum, or on social media @ESCUnited.