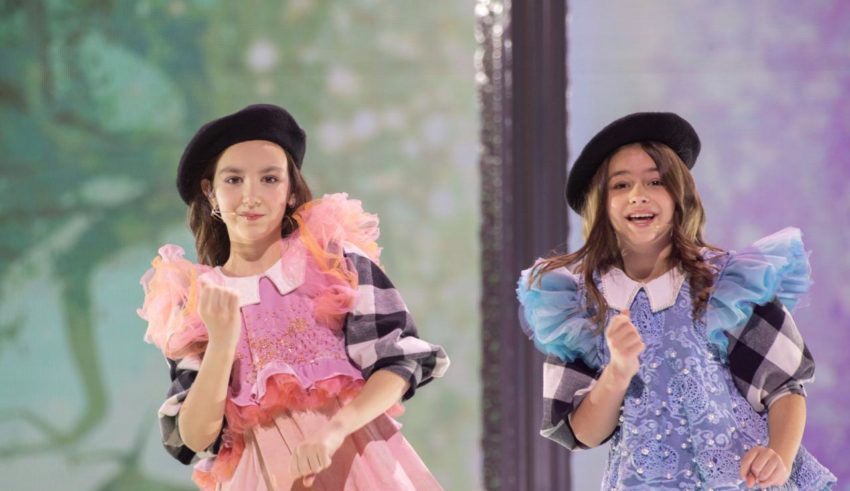 Serbia’s second stretch has not been too successful. The best from this period is Lena Stamenković’s “Lenina pesma” that came in 7th in 2015, but Dunja Jeličić came in 17th and last in 2016, while Bojana Radovanović narrowly avoided last place in 2018 by coming in 19th with “Svet.” Serbia placed 10th with Darija Vračević and the song “Podigni glas” in 2019, and 11th with Petar Aničić and “Heartbeat” in 2020.

Jovana Radonjić and Dunja Živković were internally selected by Radio Television of Serbia (RTS) and presented to the press on October 28, 2021.

Though a duet for this contest, both are active participants in local music festivals, with Jovana excelling with her piano playing and Dunja her singing.

Composer Ana Frlin is a renowned pianist and composer who lives in Novi Sad. She is known in Serbia for having composed an interactive children’s book about Mexican music, and is known for her playing with jazz groups in Serbia.

“Oči Deteta” (Children’s Eyes) is about being a positive influence for children, as the positive things they see are the seeds that yield positive fruit in the future.

With the background out of the way, here is what we at ESC United think of Serbia’s entry for Junior Eurovision 2021.

Boris – 4 – “The Serbian selection received 7 applications total for JESC, and worse, you can tell by merely listening to “Oči Deteta“. It’s hard to give a passing mark when I’m forcing myself to think of positive things to say and the best I can muster is “well, it could have been way worse, I suppose”.

Connor – 4 – “Serbia decided to show up with the more cute junior entry this year, one that pulls at the heartstrings. Don’t get me wrong, Jovanna and Dunja can sing! But in a year where so many countries went with a modern song – this one just falls short of the mark. If this came through in the late 2000’s though, it would have DESTROYED the competition I’m sure. They will pick up quite a few points I’m sure, but I don’t think they have winning potential at this time.”

James – 4 – “Instrumentally, it sounds like a cut from a children’s mix CD I might have accidentally picked up in Hong Kong in 2002. I get the sense the composer is going for a specific time and place, but unlike the Portuguese kid and his fado tribute to his grandmother, I don’t get what they’re going for. Nice harmonies from Jovana and Dunja, though.”

Melanie – 5 – “Serbia has the exact same problem as they had last year: I just keep forgetting the song. The intro is really promising and I love the Serbian language, but I get bored halfway the song. While the girls are giving it their all, the song is just not working for them. It just sounds very outdated. Hopefully they can still convince me in Paris, but the studio version isn’t working for me.”

Roy – 5 – “Yeah, the biggest selling point about this song are the two girls themselves and how well their voices fit together. For the rest? The production is a bit old and the instrumentals that follow the chorus are really feeling like it could belong in adult Eurovision 2002. None of these things are very good things. The Serbian delegation really dropped the ball on this one if you ask me. The two girls are massive talents and their soothing voices are the big redeeming quality about this song for me. Overall though, not good enough!”

Stefan – 7 – “At one moment I love the music, at one I don’t. The thing I really do love is the harmony of the girls voices. I am expecting a totally cheesy performance and I’m not mad about it. Being a fourth ballad in a row, I am hoping my country will (finally) send a bop next year.”

Tyler – 8 – “”Children’s Eyes” is a song that glorifies the way that children can see more than what adults give them credit for and can see what’s ahead of them. It’s a good ballad and Jovana and Dunja sing the song well enough, even if I find the song isn’t as dynamic at times as say one of their former Yugoslav comrades. It’s a good song overall though that could place comfortably midfield or reach top ten.”

William – 5 – “This is very sweet. Jovana and Dunja are some of the youngest singers we have, and their entry is similarly a little less mature than the rest of the competition. Whether that’s a good or bad thing is hard to know until we see everything performed live. “Children’s Eyes” is definitely lacking the slickness we’re getting from other songs. The actual production on the track is not the greatest.  But the rough edges somehow make it more endearing. My hope is they can execute these killer harmonies on the night. That would be an accomplishment Serbia can be proud of.”

Good news! Apart from Serbia itself, this song has an avid fan in Alaska. Next time a Serb tourist goes salmon fishing, they’ll have something to talk about with their guide. However, a common complaint is the lack of modernity and dynamism, despite a sweet performance from the stars themselves.

Seventeen countries in, here is how ESC United has the entries ranked.

What do #YOU think of Serbia’s entry? Let us know in the comments below, on social media, or in our forum.