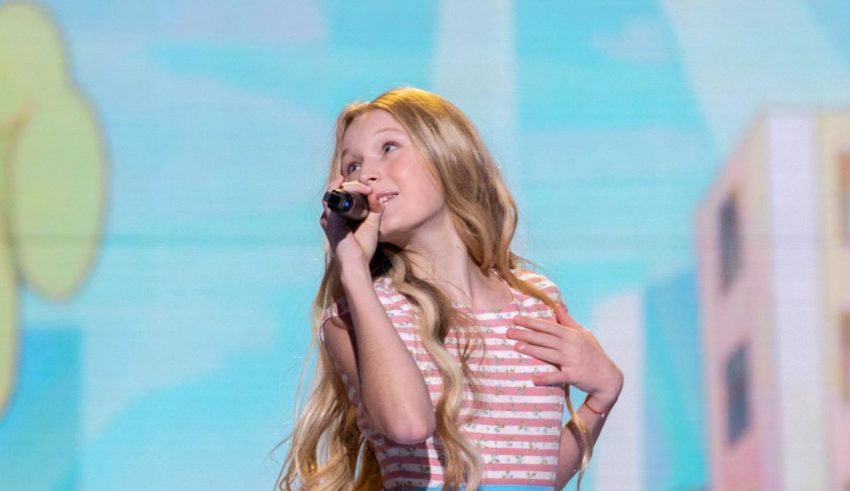 Today, we look at contest heavyweights Russia, whose form has been wobbly at the contest of late.

Russia have only finished three times in the bottom half at Junior Eurovision. That was in 2005 on their debut appearance “Дорога к солнцу” (“Road to the Sun”) by Vladislav Krutskikh, which came in 9th out of 16.

Anna Filipchuk came in 10th in 2018 with “Unbreakable.” Tatyana Mezhentseva and Denberel Oorzhak came in 13th with “A Time for us,” and Sofia Feskova again hit 10th in 2020 with “My New Day.”

Russia again utilized a national selection with twelve young acts being invited by children’s network Carousel to try out. As usual, it was a 50% jury and 50% televote.

The jury was made up of Manizha (she of the infamous dress-mobile who represented Russia at Eurovision 2021), Yulia Savicheva (Eurovision 2004), Ekaterina Orlova (Russia’s Head of Delegation for Eurovision), and two kids in Ekaterina Maneshina and Valery Kuzakov.

Andrey Dobryshev won the jury vote with “100 dorog” with Liza Trofimova coming in second with “Zachot.” But it was a familiar face who won the televote and the whole selection: Tatyana Mezhentseva, who was in a duet with Denberel Oorzhak two years prior, and her solo effort “Mon Ami.”

Tatyana Mezhentseva was born on December 14, 2009 in Moscow. Per junioreurovision.tv, she can play both the piano and the flute, and is also involved in gymnastics and dance at school.

“Mon Ami” (“My Friend”) was written by Alexander Broshovyan, with lyrics by Danu Boian and Dmitriy Korochin. Mezhentseva herself also gets a writing credit.

With the background out of the way, here is what we at ESC United think of Russia’s entry for Junior Eurovision 2021.

Boris – 7 – “lmfao, okay, Russia you can slow down now. “Mon Ami” panders so hard towards French music (and specific French Eurovision entries – am I the only one who hears Alma’s “Requiem” in this?) it’s funny. Like all blatant attempts to win JESC this one will fail once it collides headfirst into the Poland/Spain buzzsaw and gets taken down for Being Too Threatening.”

Connor – 8 – “Well this is not the song I expected from Russia but is also is a great song. It combines some elements of Spanish flamenco guitar sounds with some musical elements I would expect from the French pop scene, and then puts it in Russian and English. It’s such a weird combo that works! This will stick out for good reasons, and of course we know that Tayna can SIGN. Probably not a winner, but a great attempt and will place well.”

James – 5 – “The Russian pandering machine is at it again, this time with the sprinkling of French on top of the “Million Voices” type overtures. The fact the Russians do it so comically bad actually gives Russia’s entries a type of charm. I have no issues with Tanya as she is by now a slick and polished performer who we will no doubt see in Eurovision 2026.”

Melanie – 7.5 – “Happy to see Tanya back at Junior Eurovision. This time, she actually is showing her full potential in Mon Ami. I like the music video and the effort the Russian team put in it. You definitely see that Tanya came back to win it all. She definitely steals the show with her angelic look and voice. I only think that the beat is missing something. The instrumentals when she doesn’t sing just feels very underwhelming. Anyway, with an attention grabbing choreo, she still can be in the race to win it all in Paris.”

Roy – 9 – “Okay, we know she can sing very well! She has shown us as well that she can sing this particular song perfectly fine as well. Then the song. It is very uplifting and cheerful. I just have this hunch that this will have a lot of people loving it. The song is very open for a good staging as well. I can already see this delivering the final winning performance on the night to close the show. For me, the biggest favourite to win Junior Eurovision this year!”

Stefan – 9 – “I really liked her entry from 2019 and I love this one. She has proved that she has the voice, so I have no worries if she will perform it well live. Certainly one of the best songs of this years contest, IMO the dark horse.”

Tyler – 7.5 – “Tanya’s vocals are featured well in the song “Moni Ami” from Russia, and the song itself is interesting. The instrumentation keeps me intrigued as it goes on, and while the song didn’t connect quite well to stick out to me, it is still pretty good overall! The lyrics themselves are pretty imaginative and with good staging, can only elevate this song enough for a good placement in the contest.”

William – 9.5 – “I am ashamed to admit how many times I’ve listened to this. ‘Mon Ami’ isn’t the most original song in the competition, but, honestly, who cares? I know I don’t. This is an EARWORM. I have been singing it to myself every single day since I first heard it. It’s catchy. It’s fun. It’s got attitude. Tanya is a pro. The song needs much more dynamic staging than what we saw in the national final, though. I hope the delegation has been cooking up something exciting. But that’s my only concern.  Otherwise, I am all in. Tanya for the win!”

A couple of our reviewers did not expect to like “Mon Ami.” Could this be the entry that surprises people and comes out of nowhere to do well?

Sixteen countries in, here is how ESC United has the entries ranked.

Do #YOU think Russia will make friends in Paris with “Mon Ami”? Let us know in the comments below, on social media, or in our forum.