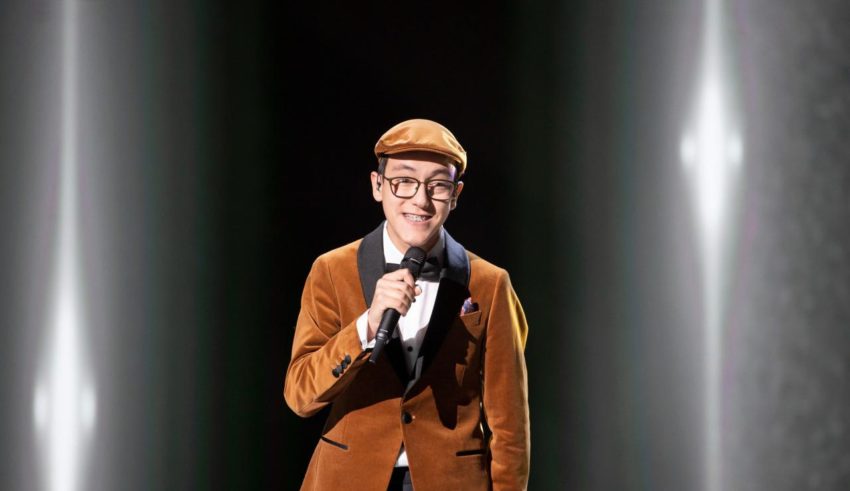 It’s 2 days to go until Junior Eurovision 2021, and we are counting down the 19 nations participating in Paris on Sunday, December 19, 2021.

Next up we check out Portugal, another nation that took a decade off after flopping early on. And have still not found good form at Junior Eurovision.

Joana Almeida’s “Vem conmigo” was an environmental song, based on Almeida’s personal experience fleeing forest fires in Portugal in 2017. Too bad, thought the audience. 16th place for you. Portugal withdrew from the 2020 contest due to COVID-19.

Radio and Television of Portugal (RTP) internally selected Simão Oliveira to represent Portugal and was unveiled in dramatic fashion.

A contestant on The Voice Kids Portugal, he made it all the way to the final. On April 18, 2021, presenter Catarina Furtado announced that not only was Oliveira the winner, he was also awarded a recording contract by Universal Music Group and would be going to represent Portugal at Junior Eurovision 2021.

Simāo Oliveira was born on May 11, 2007, in Arouca, Portugal. He is the first person in his family to have pursued a career in music (having a record contract he can now call himself a professional), and has played the clarinet since age 4.

Interviews and profiles paint Oliveira as a quirky young man, a walking encyclopedia on Portugal’s fado genre (that melancholic acoutic guitar sound), an eschewer of modern technology, and a love of farming, which he wants to be his fall back career.

The theme of the song is growing up. Simāo, trying to make sense of his grandmother’s death, listens to the fado songs that she so loved. He does not understand the lyrics about love, but he realizes that when he grows up and is no longer a boy, he will eventually and with that knowledge will be able to be a fado musician as well and continue the tradition that gave his grandmother such joy.

Simāo’s coach on The Voice Kids Portugal, Fernando Daniel, is the composer of “O Rapaz.” Daniel came in 5th at Festival de Cancao in 2017 (the year Salvador Sobral won Eurovision), and also won an MTV EMA Award in 2018 for Best Portuguese Act. Fado guitarist Diogo Clemente, who used to be married to the popular fado singer Carminho, also contributed to the track.

With the background out of the way, here is what we at ESC United think of Portugal’s entry for Junior Eurovision 2021.

Boris – 3.5 – “Okay, so… for some reason Portugal thought this music competition for children, at the end of 2021, was the perfect place to send a miserable, slow fado ballad that could’ve come straight from 1976. What could possibly go wrong?”

Connor – 4 – “It’s unfortunate because I LOVE fado music, but this song just doesn’t connect with me. While Simão has all the potential to perform this well, there’s something about him singing in his nasal cavity that makes song sound weird tonally, mainly because I hear a few pitch slides happening here and there. It is also in conflict with the pure sound of the guitar on the track, which might also feed into my “meh” feeling toward the song. I feel like I will like this song better live and it’s much better than past Portuguese entries, just not something that stands out in this year.”

James – 9 – “This song is not cool. The singer is determinedly quirky, and this entry is most likely the exact opposite of what should be sent to a kids song contest in 2021. But it’s Oliviera’s quirkiness, from his singing technique, to his old-fashioned suit, to his performing as a kid in such an un-kid like genre, that stands out. Plus, you can’t help but love the sentiment of it being about a boy coming of age trying to make sense of the death of his grandmother. We’ll likely never have an oddity like this at JESC again, but we should cherish it, and not bully Oliviera for daring to stand out with his unique voice. Even if it’s likely this will not place well.”

Melanie – 7 – “Even if this isn’t your cup of tea, you have to admit that this song is well executed. I’m happy that Simao decided to stay true to himself and sing a song that suits him, while it probably won’t suit the people who vote at Junior Eurovision. Like imagine him doing last year’s winning song “J’imagine,” that wouldn’t work at all for him! This song sounds very pure and it really shows Simao as a person. Happy that Portugal decided to take this risk with him and bring some Fado to the competition. Let’s hope that they sail the same course in Turin next year.”

Roy – 8 – “A junior that makes me emotional? Doesn’t happen very often! Simão definitely did that! This is such a brilliant and unique piece! I feel every single word that he is singing without really understanding any Portuguese. I feel like Simão will just put a piece of himself on that stage! Will it resonate with juniors? I don’t know… He definitely made me fall in love with him and his song and I hope there are many others that feel the same as me! Whatever happens in Paris, he should be proud and happy about giving us this song!”

Stefan – 5 – “Gosh… So young, so many emotions… The song itself is good, but it just shouldn’t have been given to a young boy, especially for a contest with children as target audience. Being involved with Eurovision for quite some time, nothing can surprise me anymore, so this can go either way.”

Tyler – 9.5 – “”O Rapaz” feels like it’s from another time given its traditional fado style. It seems like Simão is too young to really embody the style, but he does a great job with it and even excels. It’s not my favorite fado ever, but given the opportunity on stage, I think this song could be special. It’s simple but effective, and the live performance could enhance the magical qualities of the song. It’s a very mature entry for the contest, and that’s not a bad thing at all. A great entry from Portugal.”

William – 8 – “This is gorgeous. I love that, even at Junior Eurovision, Portugal is always true to its roots. The song is mature, while still maintaining a simplicity that makes it believable. Simão’s vocals are rich, full of emotion and storytelling. Fado music is definitely not to everyone’s taste. It’s a risk, but I hope at least the juries reward Simão and Portugal for sending something this singularly Portuguese. We need entries like this at the contest.  If the staging can fully translate the mood of this song, I have high hopes that we’ll be getting a powerful moment on the night.”

The good news for Oliviera is that it appears there may be enough votes out there to give Portugal a decent chance of a mid-table finish. But ESC United is a panel of quirky adults, and with the “Lord of the Flies” type world of kids, we’re not sure of its chances. Godspeed, and may he find a more receptive audience at Festival de Cancao in a few years like his mentor did.

Fifteen countries in, here is how ESC United has the entries ranked.

What do #YOU think of Portugal’s entry? Is it too old-fashioned and quirky to succeed, or do #YOU think there’s actually a sizeable enough audience to appreciate it? Let us know in the comments below, on social media, or in our forum.