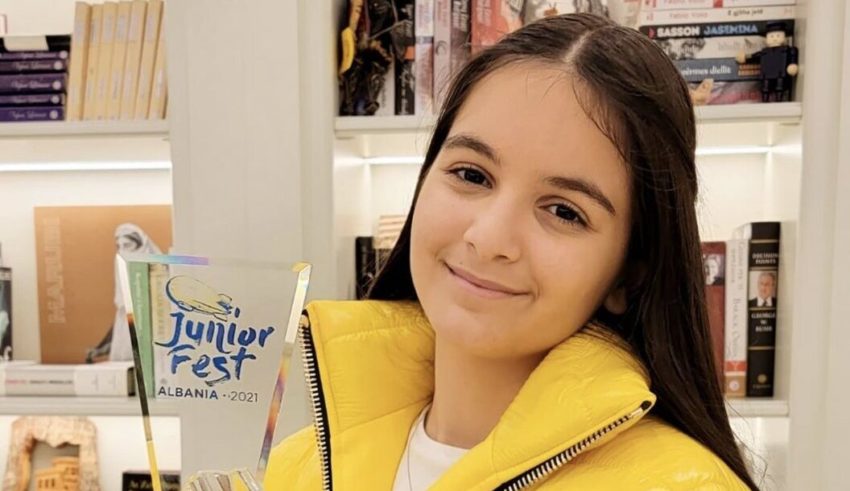 It’s 12 days to go until Junior Eurovision 2021, and we are counting down the 19 nations who are participating in Paris, France on Sunday, December 19, 2021.

To say Albania’s form at Junior Eurovision since their debut in 2012 has been disappointing is an understatement. Albania has only been in the top half once with Mishela Rapo’s “Dambaje” placing 5th in 2015. After their debut effort in 2012 came in last (Igzidora Gjeta’s “”Kam një këngë vetëm për ju”), they skipped 2013 and 2014. Gjeta’s song title translated to “I’ve got a song just for you,” but sadly there were not many takers. Since 2016, it’s been 13th, 13th, 17th, and 17th.

After Isea Çili’s “Mikja ime fëmijëri” in 2019, Albania was one of the many countries that withdrew from Junior Eurovision 2020 due to concerns over COVID-19.

Junior Fest 2021 took place on October 23, 2021, featuring 19 young acts hoping to impress the jury of Albanian music professionals who determine 100% of the scores.

In the end, it was Anna Djebrea who emerged victorious with her anti-bullying anthem “Stand by You,” with Marina Daka coming in second with “Shoqja ime” and Klara Leti coming in third with “Ëndrra ime e vërtetë.”

Anna Djebrea is 12 years old and hails from the capital city of Tirana. Music runs in her veins, as her father Ardit is a prominent musician in Albania. He is also the host and producer of E Diela Shqiptare, a popular Albanian TV show.

Fans of Albania will also note that Ardit Djebrea won Festivali i Këngës in 1991 and 1995. In addition, Djebrea founded Kënga Magjike in 1999, another major annual Albanian music contest that has featured Eurovision alumni such as Jonida Maliqi as winners.

Also in common with her father, Anna is a budding pianist and songwriter, and wants to follow his career as an adult.

Djebrea has mentioned that “Stand by you” has anti-bullying as a theme, with lyrics from the perspective of a stronger kid reaching out to a younger, struggling kid with offers of support. Djebrea contributed lyrics to this song, earning herself a co-writing credit.

Eagle eyed Disney fans will note the name of Adam Watts as a composer on “Stand by You.” Born in Orange County, California, Watts made his name as a Christian multi-instrumentalist, but made his mark writing hit songs for Jesse McCartney, with “Beautiful Soul” hitting Number 5 on the Billboard Hot 100 in 2004. He then signed a contract with Disney, and wrote music for Hannah Montana, High School Musical and other productions. He has also written for Kelly Clarkson, The Jonas Brothers and Colton Dixon, and also wrote the soundtrack for Disneyland’s 60th Anniversary Fireworks Spectacular.

Joining Watts from the United States is another Christian composer in Gannin Arnold, who started out as guitarist for Taylor Hawkins’s band (Hawkins famously being drummer for Foo Fighters and Alanis Morissette). Watts also wrote for Colton Dixon, and produced a solo album for legendary Eagles guitarist Joe Walsh.

American Idol Season 12 contestant and singer Sanni M’Mairura and Albanian actor and cinematographer Endi Çuçi round out the songwriting team.

Luca Tommassini, fresh off choreographing Senhit’s Eurovision 2021 entry “Adrenalina” for San Marino, will choreograph Gjebrea and her dancers in Paris.

Boris – 8.5 – “After experiencing first hand how Me Tana’s glory was unfairly denied by Mikaela Minga and saw my love for it shamed by Arilena Ara’s crusty stans (you KNOW who you are!!!), it’s a delight to see its spirit live on in an RnB bop with a anti-bullying theme. ELVANA LIIIIIVES :eagle screech:”

Connor – 7.5 – “You can’t deny that Anna has a great voice, and her potential really shines here. I feel like the song itself carries a good message, especially for JESC, and I like the chorus a lot. I feel like the verses are a bit weird in a way, mainly just because it doesn’t have a lot of melodic change-up (it’s the same 5 notes almost) BUT the energy and dance vibe for this song can carry her far in the rankings if it’s staged well.”

James – 7 – “This checks all the boxes on the list of things you want in a JESC song: 1.) positive message, 2.) catchy chorus, 3.) likely to be a great dance number, 4.) charismatic vocalist. I think that rap lyric thrown in at the bridge to try give it a wow moment falls flat. The song needs a wow moment, which could come in the staging, but as it stands “Stand by You” is a catchy, fun and by-the-numbers JESC entry.”

Melanie – 6 – “Potential Dark Horse in this competition. It’s such a cool song and Anna is bringing that vibe in the song. I’m just not a big fan of the chorus, because it’s killing the cool vibe that you have in the verses and in the post-chorus. Also, I’m scared that the message we see in the music video isn’t clear for the viewers of the contest. Anyway, I think that a lot of people actually would like this song. I’m really trying, but somehow it doesn’t work for me.”

Roy – 5.5 – “This song had the opportunity to be an 8/10. Unfortunately, the producers of this song decided to sabotage themselves a little.. The start is very cool and even a bit urban. Her voice sounds great and I am bracing myself for a great song. Then the chorus starts and it is just really really poorly done. Even with the cool vibes of the verses and the ‘drop’, the chorus just makes it feel so flat and uninteresting. Near the ending, there is a moment of silence. After that they should have inserted something that would have absolutely caused a BANG. Unfortunately, it is the same very mediocre chorus again…”

Stefan – 5 – “I really don’t get all the hype about this song. It’s just typical teenage song. I do salute the message, but I don’t see how it will be presented on the stage. Also, I find questionable how she sounds in the video, so that makes me more worried about her live performance.”

Tyler – 7 – “”Stand By You” presents itself as an anti-bullying song that seems more pertinent than ever. Anna Gjebrea sings the song well, but the song itself doesn’t seem to have a lot of moments that could show off Anna’s talent. The tune is pretty catchy with its style, and I still found myself bopping my head to the beat. It’s a good song overall and wouldn’t be surprised if others stand by this song.”

William – 7 – “Of the 2021 crop, “Stand by You” is the performance I’m most intrigued to see on stage. I have a feeling Albania is about to go ALL OUT. There’s potential to really throw a party, and I hope the delegation takes advantage. Anna has the swagger and style of a modern pop girlie, with the voice to match. This sounds A LITTLE like two different songs that were stitched together in parts, but both of the songs are good, so why complain? I’m hopeful Albania can get its best result at the contest since 2015. It would certainly be well-deserved.”

Boris and the Americans gave “Stand by You” and a score of 7 and above, while the rest of the European contingent felt something slight was missing from the entry to give it more impact. Still, 6.688 is a respectable score from a diverse panel (as in age, taste, geography, etc.), and we shall see how this stacks up against the other 18 entries when we go through their reviews.

What do #YOU think of “Stand by You”? How do #YOU feel this stacks up against the competition? Let us know in the comments below, in our forum, or on social media!