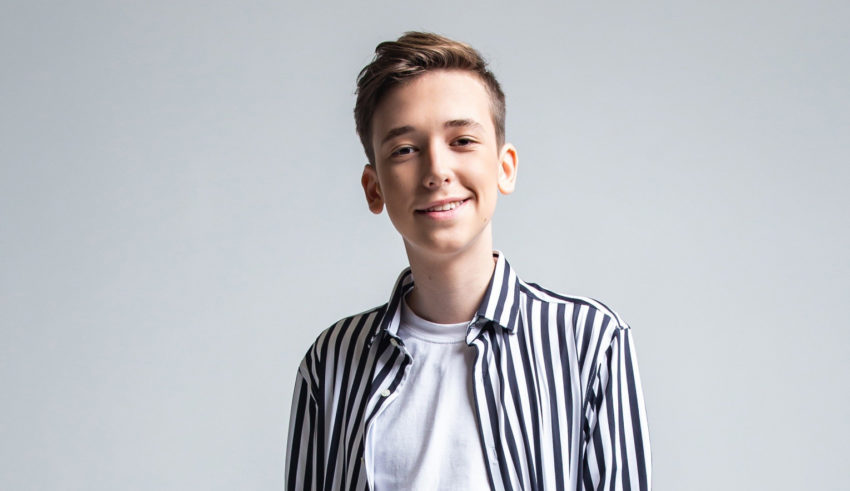 Ukraine had a national selection, and yes it was something of a debacle as usual. However, in comparison to improper vote tallies and Joseph McCarthy-esque hectoring of artists’ patriotism, this one’s transgression is mild: the winner of the online vote was such that the jury’s vote could not overcome it, and the winner was known four days before the national selection final.

The list of jurors for the ultimately futile vote were:

However he got to Junior Eurovision 2020, it should not take away from talented 14-year-old Oleksandr Balabanov that he co-wrote the music for his own entry, “Vidkryvai (Open Up).”

Another strong point: he wrote his own song, but he is also persistent on top of being talented. He had previously entered the national selection for both 2018 and 2019, having entered “My dity zemli!” and “Power in You,” respectively.

He was born on July 5, 2006 in Donetsk, Ukraine, and is currently studying music in high school.

“Vidkryvai (Open Up)” was written with Mykhailo Klymenko, who co-wrote Ukraine’s 2018 entry “Say Love,” and also co-wrote KRUTЬ’s “99” for the 2020 Ukrainian national selection for Eurovision 2020, which came in 3rd to “Solovey” by Go-A.

Connor – 6- “Hot dang this kid has range which is impressive! I wasn’t a big fan of this song when it first came out, but since the music video came out and they touched it up a bit I’ve really come to enjoy it a bit more. I’m not sure where this will stack up in the full line-up but I think it has a path to placing in the top half…but it would require many other entries to falter for it to happen. Overall memorable but just alright.”

Daniel – 8.5 – “This song is rather unique, it has a heavy jazz and 90’s R’n’B vibe that make it even more unique with his higher pitched voice and in Ukrainian. This song is a grower and it has something about it that makes it such an interesting and unique addition to the contest which I highly appreciate. The voice might be the interesting factor and I cannot wait to see how he will deliver and do well.”

James – 6 – “Oleksandr shows the benefits of being a 14-year-old, the top end of the contest’s age range, by pulling off both some great high notes while also introducing some low notes into his repertoire. That element of his vocal performance makes him stand out. Sadly, that’s the only thing that stands out as the track is a little too loungey and gets lost in a competition against ballads with singers who have even more tricks up their sleeve or tracks with modern flair. However, as an artist, I think he is going in the right direction and may find more success in the senior version once he refines his songwriting craft even more from his already impressive level. He’s an artist of great promise, but there’s some better realized songs for a childrens’ contest this year.”

Melanie – 7 – “I have days that I really love this song, but I also have days that I don’t understand why this is competing at Junior Eurovision. Oleksandr’s voice immediately grabs you from the first note, even though you like his voice or not. Sometimes I have the feeling that the notes are too high for him, because I really like his voice better in the lower register. The song itself is built nicely and has a really great mellow vibe over it. I’m just scared that it
doesn’t appeal to the Junior Eurovision crowd. It’s sounds maybe too mature for junior Eurovision.”

Roy – 8 – “Yes! Yes! Yes! Ukraine, I love how you just go with something that is unique like this. It is nothing like any of the other songs and it feels like it fits Alexander’s voice so perfectly. A lovely lounge-y atmosphere while he delivers some really interesting and unique vocals. There is a lot of potential to make this a cool performance on the stage as well. The only issue that I am foreseeing is it not being catered to a kids-audience, but who knows? I’ve seen bigger surprises in the past! This is definitely one of my favourites and I have my fingers crossed that it will do well!”

Sean – 7 – “Wow! I did not even realise this was a boy’s voice at first, great job Oleksandr! He’s got soul and passion that’s for sure, and the 90s feel of this track resonates well with me. I fear perhaps that people may find this a little too boring and I’m struggling to imagine a performance for it, but I like the integrity of this one a lot!”

And that concludes our final review of the 2020 season, with Ukraine popping into our Top Half in 5th place. Which means that Kazakhstan, represented by Karakat Bashanova, wins the JESC 2020 poll by ESC United!

Do #YOU think Oleksandr’s “Open Up” has enough to stand out at JESC 2020? Do #YOU agree with the ESC United rankings, and if not how would #YOU rank this year’s dozen acts? Let us know in the comments below, on social media, or in our forum.