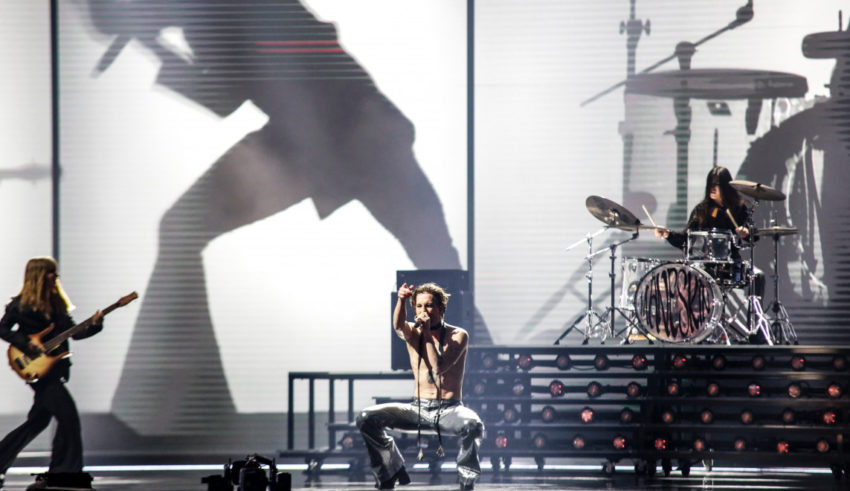 The autoqualifiers of the 2021 contests are heading into their first set of rehearsals. Italy was first in the running order. Did Måneskin stay quiet and be good? Let’s discuss.

Italy took to the stage today and finally got to perform their rock-song ‘Zitti E Buoni”. They entered the stage wearing mostly grey and silver costumes. Damiano is shirtless with a thin black scarf around him and a glittery jeans. The other members are tougher to distinguish, but wear suits close to what they wore in the music video. They brought a massive stage on which the drummer is situated and all of the members climb up there a couple of times throughout the act.

The backdrop was mostly grey with shadows of the performers rocking out to their song. The bandmembers go to all of their opposite sides of the stage at some point. The stage in the middle is the main focus for the change in colour and vibe. At first they switch from white to red and later on the lights switch to yellow. There is a moment in the middle where everything turns red and Damiano is singing the song to his band members when he goes over to them. At the ending there is a lot of pyro. There is a pyro curtain, fountains around the edges of the main stage and 3 flamethrowers on each wing of the stage.

Personally I feel like they should have focused more on Damiano to really make a connection between the audience and the song. Right now you just get the feeling that the song is for a concert. Is that the right route to go for Eurovision being a slick TV-show? I am unsure. It definitely stands out in a lot of ways. Is it a winning performance, personally I would lean towards: no.. (but they will likely score well)

What do #YOU think of Måneskin’s rehearsal? Parla! Let us know! Share your thoughts with us in the comments, on our forum HERE or on social media!