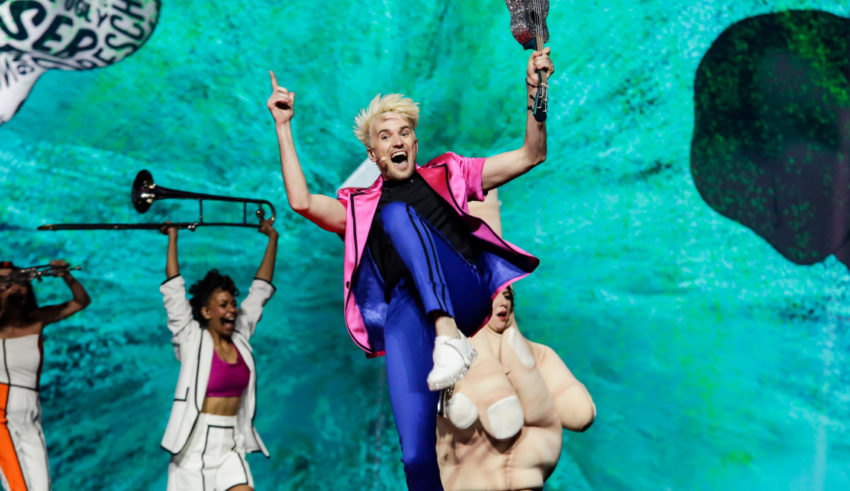 Jendrik from Germany just finished his first rehearsals on the stage in Rotterdam. Did we feel hate for his entry? We’ll let you know below.

As one might expect of Germany, their stage show is a highly chaotic one. Jendrik is backed up by a trio of lady singers (wearing Mondriaan-themed pantsuits) and the girl in the middle finger suit (which has been adapted to look like a V-sign if she raises her finger, circumventing the ban on actual “middle fingers” in Eurovision).

The concept is simple: Jendrik and his dancer (in the handsuit) engage in shenanigans during the breaks, and during the verses Jendrik attempts to sell the song with his tooth-paste smile. The backdrop consists of “negative words” (annoying, nasty, ugly, etc) being shattered.  Jendrik is wearing a short-sleeved magenta jacket with dark blue pants and is carrying a bedazzled ukulele.

Overall, the rehearsals we saw came off as largely amateur. Jendrik sounded out of breath very quickly into the first run, and despite his insistence to perform with gusto and enthusiasm, his unique brand of humour was largely lost in the press centre. Germany needs to rethink how to better capture their act’s whimsicalness.

What do #YOU think of Jendrik’s rehearsal? Do you feel hate or love? Share your thoughts with us in the comments, on our forum HERE or on social media!