Home 2019 Iceland: Hatari’s use of Palestine flags pre-agreed by all group members 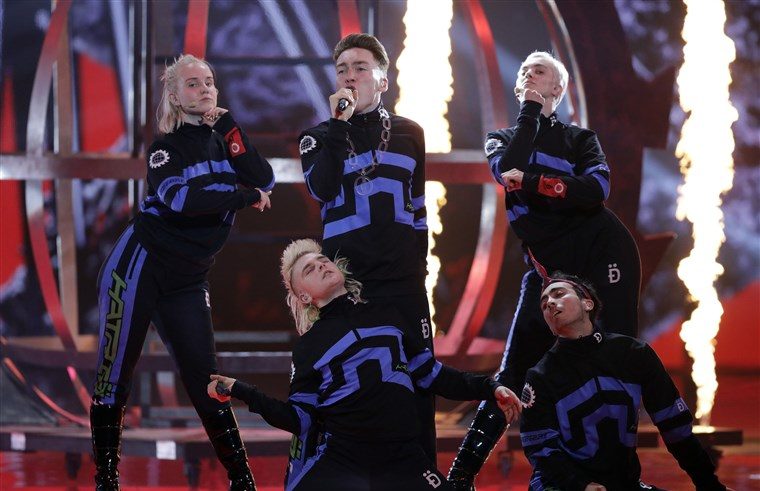 Controversy erupted within the Expo Tel Aviv and social media this week after the Icelandic band Hatari displayed Palestinian flags during the televoting sequence, and we want to give you the full story. This article takes no political stances nor intends to legitimize the acts of Hatari members, but report the experiences of the group during their time in Tel Aviv.

During the weeks of rehearsals, things got worse for Hatari as it was revealed that the band was requested for a meeting with Jon Ola Sand to discuss their behavior in Tel Aviv. While the contents of that meeting remain unknown, we know that the EBU felt that Hatari was leaning too far into politics, as Matthias revealed that “they told us very clearly that we have reached the limit for EBU’s tolerance, if not already passed it, when it comes to politics.” From then on, the phrase “We cannot answer that, we have bordered on the line of being too political” was used often by Klemens and Matthias in response to questions.

Despite skirting the line and being political and authentic and the discussion with the EBU, this did not stop the group from revealing Palestinian flag banners during the Grand Final. Based upon an interview by mbl.is with female members Sólbjört Sigurðardótti and Ástrós Guðjóns­dótt­ir, it was revealed that this decision was a planned act that the group agreed upon before the Grand Final, but the reaction from Eurovision fans and security greatly startled Sigurðardótti. Einar captured what happened after the cameras moved to the next country on his instagram.

Sigurðardótti also mentioned that after that altercation and when told that they needed to hurry to their dressing room after the show, she got extremely worried. Things got worse when she received a message on WhatsApp with a photo of her daughter and a message wishing she would die in Gaza for what she had done. She was also worried that the band would be arrested in Tel Aviv for their stunt.

The group was also met with hostility on their flight home to Iceland, as flight crew among El Al assigned Matthias, Klemens and Einar to middle seats at the back of the plane boasting “[it] is what they get.” It would appear that Hatari could be considering legal action against El Al in response.

To add to this, earlier today Hatari released their first new single following the contest, and will not help their popularity in Israel, as the group teamed up with LGBT Palestinian artist Bashar Murad on the Arabic-Icelandic song “Klefi / Samed”, complete with desert video and Palestinian imagery.

#YOU can see their latest video below;

What do #YOU think of this story? Share your thoughts with us on our forum HERE or join the discussion below and on social media!