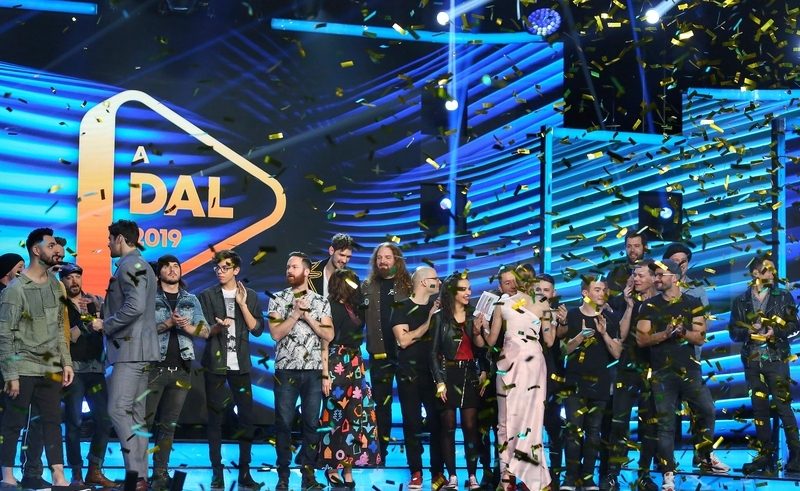 Hungary’s A Dal selection continues this evening with the second heat, as ten more acts battle it our for six spots in the semi-final stage. Notable participants in this week’s heat are yesyes, who return after reaching last year’s superfinal and with an entry that has racked up almost half a million hits on YouTube, and The Middletonz, featuring a certain András Kállay-Saunders.

James – 6 – “Is this the theme song for the Hungarian version of “Dawson’s Creek”? It is a remarkably pleasant sounding acoustic pop song, which one would expect with a name like “Summer Showers.” A better match than pairing post-hardcore with a song called “Goodbye Summer” as happened last year, I suppose. And as with AWS’s post-hardcore, Acoustic Planet’s bubblegum acoustic guitar parent-friendly pop sounds out of touch with Eurovision. Its presence confuses, not engages.”

Sean – 4 – “Well this is sweet. This is lovely. This is… well, there’s not much else to say. It has that certain charmingly twee feel about it, like entrants such as Portugal’s Flor de Lis or Malta’s Gianluca Bezzina. I’m sure the duo are lovely, warm, radiant people, which will certainly help the song. But is it too nice for its own good?”

James – 5 – “I don’t know if moping around in a bathtub or setting fire to photos is a winning look or stage concept for Eurovision. Vavra’s a decent singer, though the key change is clumsy and it’s mopey modern pop with the usual cliched echoes and modern production effects thrown in. I really like the singer, but I do wish he had a much better song as this one does him no favors.”

Sean – 4 – “This is a little bit disappointing, as the verses seemed to be really building towards a hell of a release. The chorus that follows, by comparison, just feels a little flat. Bence has a raw, slightly raspy quality to his voice which helps to make it a little more dramatic but this feels like a missed opportunity to make a truly dramatic and breathtaking song.”

James – 8 –  “I was wondering when we’d get to hear a synthwave band of the likes of Perturbator or Carpenter Brut try out for Eurovision. This is an admittedly niche sub-genre, blending electronica with metal and 1980s soundtracks (e.g. Vangelis) with an 8-bit or 16-bit video game aesthetic (great staging possibilities), but “La Mama Hotel” is a decent entry with a great guitar solo thrown in, though the dubstep touches may be a bit of a turn-off.”

Sean – 6 – “80s synthwave in Hungarian? Hey, it’s Eurovision – why not! It’ll be interesting to see how this is staged; go all out in the retro feel or go for something dramatic and dark to counter the dated feel of the track? This type of music has certainly made a resurgence recently, but the best examples of this genre throw themselves fully into the 80s aesthetic with big beats, and this example falls a little short in this respect.”

James – 7 – “The chorus is very catchy, though could do with a bit more power, which sounds like Diana is capable of. The instrumentation could do with some work as the synthesizers clash with Diana’s voice a bit too much. However, with a few tweaks this song would please the whole damn world.”

Sean – 6 – “I have to say that I feared this would be a musical equivalent of blue balling, with a song that hypes up to a drop of epic proportions and doesn’t deliver, but the way the song slowly builds its way up to the stuttery dubstep in the latter choruses is certainly effective. Diana has an odd voice but it works with the song, although I’m not convinced on the lyrical content of this.”

James – 3 – “As a disclaimer, I personally dislike the metal sub-genre of post-hardcore that AWS, who represented Hungary at Eurovision 2018, and Fatal Error truck in. The vocal style, borrowed from pop punk such as Blink 182, just makes them sound like kids angry at their parents because they make them mow the lawn before they can go to Hot Topic. It’s unlikely we’ll ever get melodic death metal or groove metal to Eurovision, but that doesn’t mean us metalheads have to endorse this Kids Bop metal either.”

Sean – 5 – “Finland have to be careful that their Ugric brothers don’t steal their rock crown at this rate! This is basically a very light commercial rock song though, with verses that pale in comparison to the instrumentals in between. It’s reminiscent of You Me At Six or All Time Low, which has its own fanbase of course, but certainly not the type of tame mainstream attempts at rock I’d like to see in Eurovision.”

James – 3 – “A derivative and trite modern hip hop influenced pop song. One minute is about as long as it lasts in the memory. A pity, as it sounds like Gotthy himself is capable of so much more, that they lumbered him with a boring song with all the cliched modern production fixins’.”

Sean – 7 – “Gotthy brings a stereotypical modern pop song with vocal modulation samples and electronic beats, which is fast becoming a trend in Eurovision. Which is all fine of course, as it works for a lot of people these days! “Csak 1 perc” is a decent RnB style track with some interesting use of what sounds like sampling, so it’ll be interesting to see how this would be handled should the song get to Tel Aviv.”

James – 7 – “A Dal does bring a lot of duds, but you do have to respect the organizers for putting on a diverse array of genres and performers. “You’re Gonna Rise” is a fine jazz song by a gifted and experienced performer in Klara Hajdu. It’s not going to win, and to be honest it sounds like the background music playing on a date during “The Golden Girls,” but non-Hungarians watching will get exposure to jazz acts they’d never hear elsewhere.”

Sean – 2 – “This is a barrage of clichés wrapped in piano ballad paper, and while Klara has a lovely lullaby voice, it’s just not enough for this track. This is the first time I’m wheeling it out this year – Disney ballad alert.”

James – 8 – “András Kállay-Saunders is back with his rather peculiar brand of hip hop with wacky tempo changes. The lyrics are usually where he falls flat, and he does here again, alternating between anger and neediness this time. Normally I’d be against break-up lyrics at an occasion like Eurovision, but he somehow made it to 5th with a song and dance routine about domestic abuse, so he’s got a real knack for blending up tempo hip hop choruses with dark subject matter. This one works less well, but I wouldn’t count him out even though the composition has more plates spinning in the air than ‘Running’.”

Sean – 9 – “Not that we should expect any less from András Kállay-Saunders but this is very well put together. The blend of rap, dirty electro, rock and choppy tempo changes keeps the listener on their toes but it’s a hell of a journey and the song takes you in a pleasing direction during its duration. This would be a breath of fresh air for Eurovision!”

James – 3 – “If you’re going to go religious, make sure it blows the doors off like Laura Bretan is doing over in Romania. “Ő” is just tedious and pedestrian. I’m not going to slate a singer who praises his Lord and Savior who guides him through rough times, but he should translate his conviction into song with passion. This has all the passion of someone who luckily escaped a parking ticket.”

Sean – 8 – “This is a bit of an Ődd song to listen to, but I think I like it. It’s simple but the production value and the vacant shoe-gaze styling is intriguing to me. When it kicks in during the last 30 seconds it reminds me a little bit of a Beach House song, which is certainly not a bad aesthetic to be chasing. Have to say that I am enjoying this one, possibly despite my better judgement!”

James – 2 – “A mediocre drum and bass song with overwrought lyrics and cliched backing vocal echo effects. And no, I don’t want to hear about your relationship problems at Eurovision, thank you very much. I’d say they took a step backwards from last year’s “I Let You Run Away,” but that was boring and cliched as well. We enjoy Markus Riva at Latvia’s national selection because he is an artist who exhibits growth with every year. He’s learned, adapted, he’s not banging the same drum. Putting out pretty much the same song one year after the next is not growth, yesyes.”

Sean – 8 – “yesyes were fantastic in last year’s national final so it would take some effort to top “I Let You Run Away”. Judging from “Incomplete”, the duo certainly have a knack for emotive and soaring trap music, and it’s a decent follow up to their 2018 entry. While it may take a while to enamour myself with this as much as ILYRA, this has all the potential for a bombastic performance that will blow away the audience in Tel Aviv and really impress the younger voting public at home.”

We’ve had our say, but what did we think overall? Let’s take a look at our rankings…

As it stands it is The Middletonz that take our clear favourites spot, with Dávid Heatlie and Diana not too far behind. But will these three acts be among the qualifiers this evening?

Make sure #YOU have your say in who your favourites are tonight in our poll, which can be found HERE.