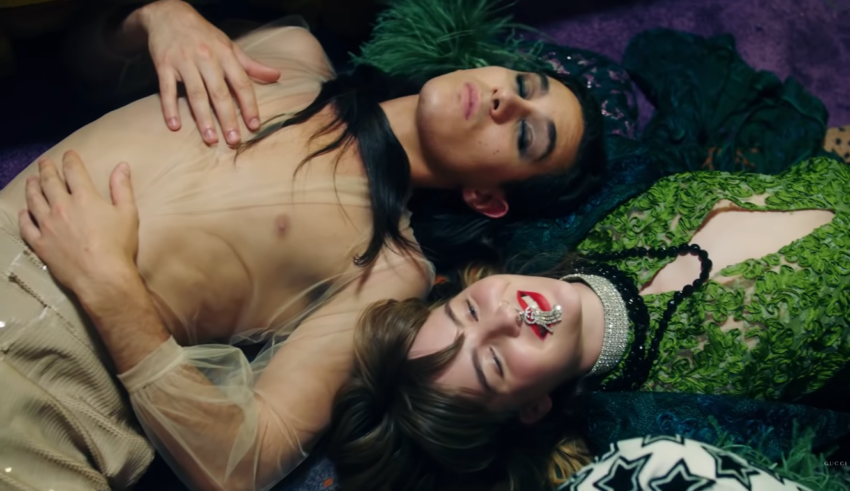 © Mert and Marcus for Gucci
Victoria and Ethan luxuriating in the Gucci Aria short film.

As if winning Eurovision and ascending up the worldwide music charts wasn’t enough, the members of Måneskin can add ‘supermodel’ to their resume.

An editorial photo shoot and accompanying short film was released by luxury designer brand Gucci today, and both prominently feature Damiano, Victoria, Ethan, and Thomas! In the photos and film clip, the members of Måneskin are seen wearing items from the Gucci Aria collection, the fashion line’s first collection of this, their 100th year of operation. You can read more details and view a slide show of the collection on Gucci’s website.

The photos and short film were shot by Mert and Marcus, a duo of fashion photographers who have worked together since 1994. They have shot covers for magazines like Vogue, W Magazine, and Interview, as well as Kim Kardashian’s infamous nude cover of GQ in 2016. They are also no strangers to photographing Italian Eurovision royalty. In 2019, they lensed a Burberry campaign featuring Mahmood.

The entire Gucci Aria campaign was overseen by Alessandro Michele, the designer who has served as creative director for Gucci since 2015.

Do #YOU think Eurovision is going mainstream? What other past Eurovision winners do #YOU think would have killed in a fashion editorial. (Personally, I’d love to see Måns in his Calvins.) Sound off in the comments below, in our forum, or on social media @ESCUnited.