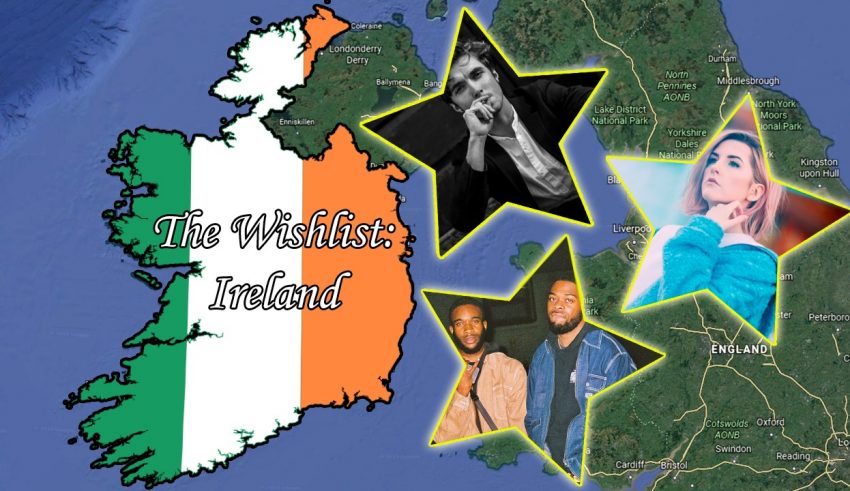 Eurovision has been a big platform for artists to kickstart their careers in the past. This is a beautiful thing in our eyes and we would like to make a contribution of our own. In our wishlist series, we want to put the focus on smaller intriguing artists to give them the spotlight that they deserve. We will go by every country and propose 3 artists that we found interesting. We are striving for a unique list with up-and-coming artists, but keep in mind that this is not always possible. Today it is time to take a look at 1 of Eurovision’s all time greats: Ireland!

Laoise (read Leesha) is a young and aspiring pop-artist that tries to lay her stories and meotions into her music. The 22-year old hasn’t been active for too long, yet she was already nominated for best song of they year in 2018. RTÉ chose her song “Again”  for this nomnation. It is a slick pop-song that shows you the potential that this girl has in her. She has continued to make music and I think she would be an amazing pick for Ireland. Her song “Mad” would especially be something cool for Eurovision:

In my eyes she is a bit of a diamant in the rough. She has a whole lot of potential and has a good sense of music. In some parts I do feel like she could use a little more polishing to make her songs even better, Maybe Eurovision is the right thing for her to get her career into the next gear. I honestly think that she should be getting a lot more of a following then what she is getting right now. Just take a listen at this live-performance. Her live-vocals sound exactly like her studio tracks. This is another great thing as to why she should be considered by RTÉ. All in all she is a hidden gem, waiting to be discovered by a bigger audience.

Now this pick is very interesting. Last year we saw Hiphop being very well received by the Eurovision community. Mahmood’s Soldi recently became the most streamed song of all time. The successor to Mahmood could be Hare Squead in my opinion. Hare Squead produce rap music that you can bounce to. They fuse some EDM into most, if not all of their music in a very organic way. They have had a rough couple of years in which they took a break from the spotlights, but in february of this year they came back after 18 months with “100 miles“. This year they have been really active and dropped some incredible productions. I could see something like “long way to go” being really great for a Eurovision stage:

With their comeback they have stated that they plan to take over the world with their music. Would you look at that, Eurovision is a massive platform to reach millions of people across the world. I also feel like thier music is very accessible and easy to listen to. I feel like the Casual Eurovision fan would embrace this kind of hiphop like they did with Soldi. The big difference is that Hare Squead fuse another very popular music genre with their rappping being EDM. Unfortunately I couldn’t really find a good live-performance on Youtube since they went from 3 to 2 members, so I decided to give you another song to listen to: “Petty“. These young lads are destined for greatness, let’s hope they will find Eurovision to be a good platform to kickstart their careers with.

It is already time for our final recommendation and what a way to end it. David Keenan is another young artist that makes incredible music. He tries to give poetry a new life and with his incredible voice, this is definitely happening. In my opinion, the best thing about David is that he seems like a normal lad that you would drink some pints with. And then you discover how good of a voice he has. This would make him a great person behind the scenes and in interviews. The recently released “Tin Pan Alley” is a great example of what he is capable of:

Yes, his music may not be something that we would typically see at Eurovision, but Salvador Sobral also won in 2017 with a song that you never really see in Eurovision. I honestly feel like we could compare the 2 rather well, they are both incredible at doing their own thing and I think that will work well with people. I could see something like his very recent release “Altar Wine” shoot to a very high placement at Eurovision. He knows how to make a song and performance very compelling. He has performed at the massive festival “Lowlands” in 2017. There he performed “Unholy Ghosts” in an intimate setting. This performance shows how great he is and I desperately hope that Ireland will take a risk one year and send an artist like David Keenan.

Those were my 3 passionate suggestions for Ireland. We will go by every country in a random order. So if #YOU have some cool suggestions for other countries, please let us know!

What do #YOU think about our picks from Ireland? Do #YOU think they were great and did we miss any cool artists? Share your thoughts with us on our forum HERE or join the discussion below and on social media!