Home History ESC 250: Loreen’s Reign at the Top Continues, Songs from Spain and The Netherlands Jump Over 700 Places 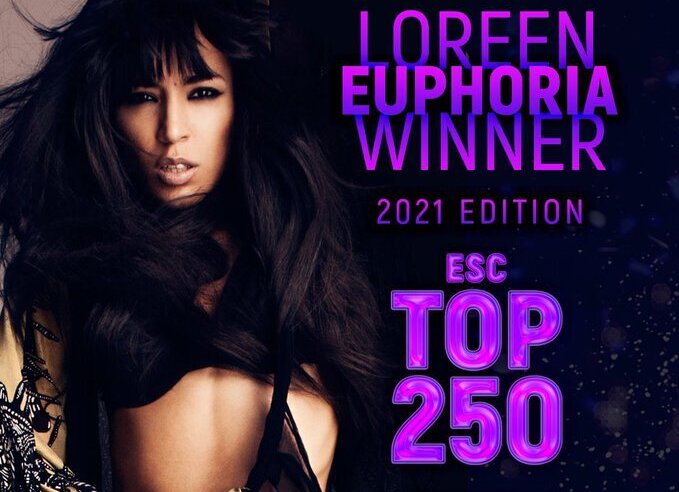 As has become an annual tradition, ESC Radio and Songfestival.be teamed up today to present the online Eurovision fandom’s 250 favorite contest entries. And when all was said and done, Loreen‘s “Euphoria” once again captured the top spot . Right on her heels were 2021 Eurovision champions Måneskin, with their winning entry “Zitti e buoni”.

The remainder of this year’s Top 10 were (in order):

As expected from the most recent contest, Eurovision 2021 secured the most spots on the list with twenty three songs, including four in the Top 10. 2019 and 2020 were also heavily represented, landing nineteen and fourteen spots on the list, respectively.

With 25 songs, Sweden was the country to snap up the most spots on the list, including #1. The earliest song on the list, and the only entry from the contest’s first seven editions, is Italy’s legendary 1958 entry “Nel Blu Dipinto Di Blu” by Domenico Modugno.

A number of songs saw dramatic shifts from their placements in the 250 last year, but none more so than The Netherlands’ 1977 entry, “De mallemolen” by Heddy Lester. That song, which came 12th at the contest in London, rose 867 spots and ended up at #233 on the countdown.

The ESC Top 250 countdown has been a fixture since 2008. Each year, Eurovision fans submit a ranked list of their ten favorite Eurovision songs, using the modern, 12-point scoring scale, and organizers add up all those scores. The very first ever #1 slot was held by Croatia’s Danijela Martinović with her 1998 entry “Neka mi ne svane”, and she has made the list every year since. “Euphoria” has placed 1st every year since its victory in 2012.

Did#YOU vote in the Top 250 this year? Did your top pick make the list? Sound off in the comments below, in our forum, or on social media @ESCUnited.