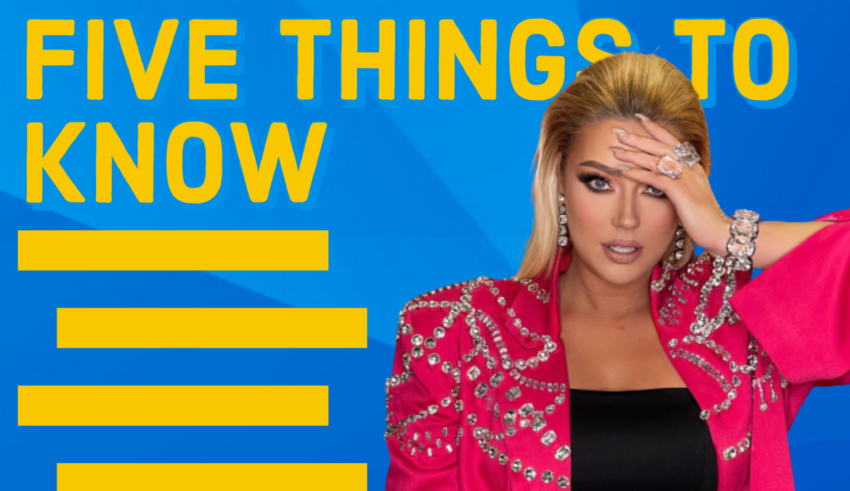 Last week, another champion was chosen. Albania will be sending 32-year-old pop princess Ronela Hajati and her song “Sekret” to Eurovision in May. So where did this diva come from? Here are five things to know about the Balkan bombshell:

Ronela was born on September 2, 1989, in what was then known as The People’s Socialist Republic of Albania.

Her father, Marash Hajati, was an influential figure in the development of media in the country. As the director of radio and television in the ’70s and ’80s, at a time when when those institutions were heavily controlled by The Socialist Party of Albania, Marash reformed and revolutionized the media landscape.

So great was his impact on the Albanian media landscape that, when he died in 2013, Marash’s body was placed in the lobby of public broadcaster RTSH’s headquarters for a wake and celebration of his life. Noted figures in media and government attended the event and gave tributes to his legacy.

Last year, to keep her father’s memory alive, seven years after his death, Ronela had his name tattooed on her forearm (see right).

Ronela has spoken in interviews about her happy childhood and the lessons her parents taught her along the way. In an interview conducted shortly after her father’s passing, Ronela remembered the greatest piece of advice she ever received from him.

“He always advised me to work, because only in this way, he told me, can you achieve the results you want. And the fact is that everything I have in life I have thanks to intensive work.”

Since her father’s death, Ronela‘s mother Meri has been her biggest supporter. As she put it in a 2018 interview, “I do not know where I would be if it were not for her!”

As one might expect from a girl raised around the Albanian entertainment scene, Ronela took to performing quite quickly. She grew up taking piano lessons and took part in music competitions from an early age, including the Shkodra Nationwide Song Festival for Children and the Festival of the Year in Tetovo, North Macedonia. At the latter, she took first prize.

Ronela ultimately reached the top 30. You can watch her audition below.

She went on to compete on Top Channel’s Poleposition and the first season of Star Academy Albania.

In 2006, at the age of 17, Ronela made her major music festival debut at Kënga Magjike, dueting with FiK regular Orgesa Zaimi on the song, “Requiem”. The duo placed 28th out of 39 songs, one spot above a song by regular FiK oddball Kastro Zizo. She would go on to compete at Kënga Magjike five more times, including at the 2009 edition with this deliciously tacky performance of “Kam Frike Te Te Dua”.

Though this year’s Festivali i Këngës was the first one Ronela competed in, she has appeared as a special guest performer at least once before. In 2009, at the 48th edition of the contest, she was paired up with Erga Halilaj on his song “Party” during the third semi-final.

She’s Kind of a Big Deal

Ronela‘s first big crossover success came in 2013 with the release of the single “Mala Gata”. In a cruel twist of fate, her father died halfway through filming of the song’s official music video.

“The only parts I had left [to shoot] were the ones with tears, where I had to scream, shout, which was not difficult,” she said in an interview at the time.

You can watch that video here.

From 2015 to 2019, in between her appearances at Kënga Magjike and other music competitions, Ronela released a number of chart-topping singles, all with YouTube views in the millions. Her first #1 single came in September of 2019 with the release of “MVP”. The song is quintessentially her, endearingly giddy and danceable.

“This song is for fun,” she said in describing the song on Instagram. “If you have [big] problems, there will always be a corner where you can dance.”

Throughout her career, she has also collaborated with a number of well-known Albanian and Macedonian perfomers, including Eurovision 2008 veteran Adrian Gaxha, hip hop artist Don Phenom, rapper Lyrical Sun, and singer-songwriter Young Zerka. (More on him later.)

After releasing three singles in 2019, Ronela took a step back from releasing music for the majority of 2020, taking the time to focus on her mental health and prepare to do the one thing she hadn’t done in her two decades in show business: record an album. That album, RRON, has yet to be released, but it has already spawned five hit singles, each with their own accompanying music video.

The most recent single from the album, “Leje” enjoyed massive success on the Albanian music charts and has racked up well over 5 million views since debuting in October 2021.

Along with singing and dancing, Ronela has a third weapon in her arsenal: songwriting. In addition to writing the music and lyrics of “Sekret”, she has worked on songs for fellow Albanian pop stars like FiK veteran Samanta Karavella and X-Factor Albania graduate Matilda Shushari.

Ronela and Anxhela are labelmates at Onima Music, and the latter performer served on the jury of this year’s FiK. Anxhela shared a message of support on Instagram the day after the festival’s final night, writing, “I felt very happy yesterday that I handed over the First Prize cup to this artist with a beautiful soul! I am convinced that her trip to Eurovision will be magical!”

And to anyone claiming her vote was based on anything except merit, Anxhela ended her caption with a mic drop.

“I have a question for all those singers who today came out with swords in their hands and cursed the festival and the jury: When YOU win, [is there] corruption in festivals?”

She’s an Open Book … Except When She’s Not

With 721,000 Instagram followers, it’s safe to say Ronela is a bit of a social media maven. She frequently receives press coverage for her fun-loving personality, Q&A sessions she holds with fans through her Instagram stories, and for the racy, body-confident photos she posts.

Googling her will lead a person down a rabbit hole of tabloid coverage with headlines like “Ronela Hajati Draws Attention with Poses Where She Emphasizes the Buttocks” and “Keep Your Partner Away When You See Her, Ronela Hajati Pulls Out Her Buttocks“. (Her butt, in particular seems to be a popular topic of conversation for the Albanian tabloid press.)

But, for someone as constantly online as Ronela, her personal life is (purposefully) left somewhat elusive. For years, she was rumored to be dating Albanian singer-songwriter Young Zerka, but the two always avoided confirming it, sometimes even issuing flat-out denials.

Of course, Ronela‘s guest appearance on the 6th season of Dancing With the Stars Albania only added fuel to the fire and kept fans at home guessing. Young Zerka, a reggae-pop artist who won Kënga Magjike 2014 in a duet with Eurovision 2011 veteran Aurela Gaçe, was competing on the season, and Ronela joined him for a freestyle dance in one episode.

It wasn’t until late-2019 that the pair began openly admitting to their 5-year-long relationship, and, by then, the relationship was on the way out. Albanian media reports suggest that the couple broke up at the beginning of quarantine in 2020, but the pair have remained mum on the reasons for their split.

However, with the chorus of “Sekret” containing the constant refrain, “Do you remember those nights?/They remained secret,” one wonders if this relationship might have been the song’s inspiration.

Are #YOU excited about Ronela’s FiK win? Do #YOU know a good place to find information about Albanian reality singing competitions of the early ’00s. No, seriously, do #YOU?  It is impossible to find. Sound off in the comments below, in our forum, or on social media @ESCUnited.