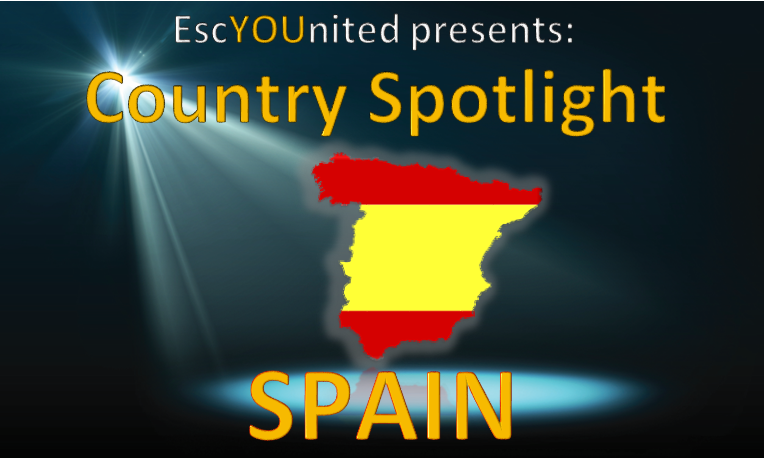 Every year we’re confronted with them – A fanbase whose bark is deafeningly loud, but who never bite. A country as passionate about the contest as it is hapless, our next object of analysis is none other than Spain.

Admittedly, I’m feeling a bit uneasy starting this editorial. Writing about Spain always comes with the risk of opening a giant can of worms. You know why – I think we’ve all ‘met’ the Spanish fanbase who are rather… passionate, if naively optimistic towards the Eurovision Song Contest. We’re talking about a country where even the ‘straights’ are emotionally invested. Spain held a parliamentary debate on whether Barei should have fully sung in English or not! Eurovision carries a lot of emotional and nationalistic gravitas on the Iberian peninsula.

Which makes the Spanish track record in the last 25 years even more remarkable. It is – as I’m sure the Spaniards would agree – worth yelling ‘¡JODER!’ at. ’25’ isn’t an arbitrarily chosen number, by the way. It marks how many contests have passed between now and Spain’s last top five finish. The outright worst track record of any Big Five member. Too often have I found it fitting to use the phrase “you can’t spell Spain without ‘pain’” in my writing. A country this passionate about Eurovision shouldn’t be this inept at Eurovision. Yet, here we are.

Two years ago, our colleagues at Wiwibloggs released an interview with the Spanish stage director, Tinet Rubira. Those who know me from tumblr know I don’t have a particularly favourable opinion of Mr. Rubira. Regardless, his interview, in which he aired his many complaints about the 2018 contest was very illuminating to say the least. He speaks about how RTP failed to provide the staging he had envisioned for Almaia, complained about the fanbases and how they were ruining the contest by supporting Netta, Eleni and Madame Monsieur instead and states he had zero favourites going into the 2018 contest (a contest generally regarded as one of the best ones in this decade.) He pointed fingers everywhere, but never at himself, TVE or “Tu canción”, which was, in my opinion, a terrible entry. Anyone who criticized his deliberately inflammatory remarks on his social media was blocked. The general sentiment was that when Almaia flopped (Rubira and TVE were fully aware they would at the time of the interview), it would be the fault of everyone else other than Spain.

If this sounds familiar to you, you’re not alone. It’s eerily similar to the issues VRT had with Sennek in the same year.

It certainly opened my eyes with regards to why Spain does so poorly at Eurovision. The problem isn’t a lack of interest – TVE care about Eurovision deeply. It isn’t a lack of direction – every action undertaken by TVE is done with the intention of doing well in the contest. The real problem is one of pure denial.

Spain are blind to their own shortcomings. Their refusal to hear anything other than what they want to hear is the underlying cause for all of their pains, in and outside of ESC. Symptoms include the shenanigans that led to Manel Navarro winning OT in 2017, and the overorchestration/overstaging/oversinging Edurne subjected us to in 2015. They did not like Ruth Lorenzo for daring to beat Brequette, even though the latter would’ve been yet another effortless bottom 5 in Copenhagen.

To say that Spain live in a bubble would be an understatement. They are living inside a greenhouse, where they are allowing themselves to be slowly roasted to death. They read Spanish media, post on Spanish fora, converse with only other Spanish-speaking fans, deliberately closing their eyes for the truth.

I wouldn’t want anything other than see Spain reach a decent result at Eurovision again, but that would require them to

Spain should become self-critical and honest. They need to analyze where they -and not the rest of Europe – went wrong. They need to reinvent themselves. Urgently.

The choice for Blas Cantó might be a first step – on paper he appears to have the full Eurovision package of looks, charisma, experience, passion and a good voice. The problem is, following the Eurovision formula isn’t going to be enough. Miki also possessed all of the aforementioned qualities and left Tel Aviv in a dummy-shaped coffin.

If we can chalk down the (in my opinion completely unfair) failure of  the very ironically named “La venda” to local circumstances – be it reggaeton fatigue or Miki being outclassed by Luca Hänni, then none can do. He would’ve done poorly regardless.

If we assume the act (with staging so bonkers, garish and unnecessary you might believe it was made in Malta [sorry] rather than Espain) sank Miki’s ship, again no biggie – TVE care about their success and won’t make that mistake twice in a row.

However, what if Miki was met with indifference because he’s from Spain? I hate to point it out, but it’s a painfully realistic possibility – After five consequetive years of utter floptitude does anyone still believe in Spain’s chances to turn it around? The fact that the Eurogaes are flocking en masse towards the altar of Pastora Soler to pray for better Spanish tidings – although “Quédaté Conmigo” is one of the most Swedish ballads of the century – is telling enough.

Spain need a Salvador, period. They need a Lordi, a Conchita, some extraordinary one-in-a-trillion contestant who sets the world en yeah-yeah-fuego and drives all the non-Spanish fans loco. At the worst, they must strive to become a cat-amongst-the-pigeons, like Loïc Nottet, the Common Linnets, Hatari and Rona Nishliu were.

I wish I could state with confidence that Spain will be rising fully reborn from their ashes at the upcoming contest. Spain are desperately trying to do well.  Unfortunately, I, like many others, no longer believe in their chances. It’s not an impossible task, the Netherlands were in a worse position than Spain and look at them now. It only requires one thing, just one thing: Spain must bite through their growing pains and confront their worst enemy: themselves.

Do #YOU agree with Boris? Did #YOU enjoy this editorial? What do #YOU think of Spain’s chances at the upcoming Eurovision? Let us know in the comments, on social media or on our forum HERE.