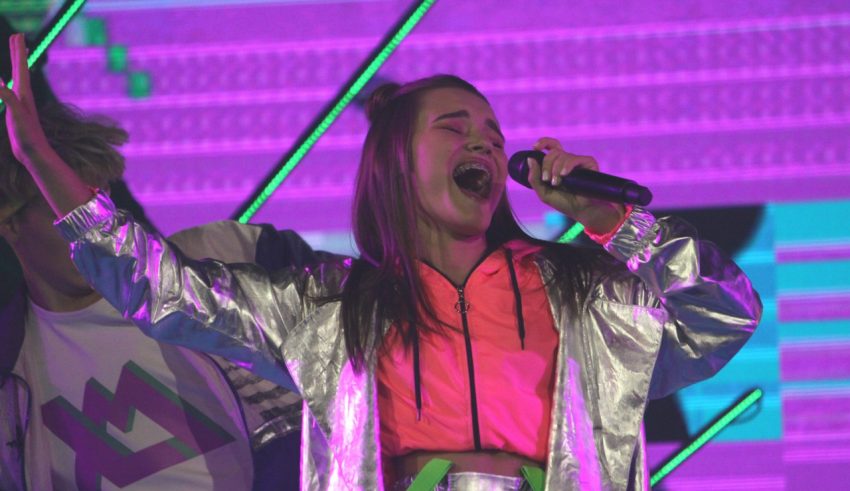 It’s 16 days to go until Junior Eurovision 2019, and we are counting down the 19 nations who are participating in Gliwice-Silesia on Sunday, November 24, 2019.

Next up we check out Belarus, a country whose performance at Junior Eurovision has been the funhouse mirror opposite of their form at the adult version of the contest.

But that is Belarus’s jam – slickly produced and staged numbers that puzzle you, and while puzzling you, get you to hit the phone lines to vote. Belarus has only landed in the bottom three times in 16 attempts, so the delegation knows what it’s doing. Additionally, they also have one 2nd place and two 3rd place finishes. Daniel Yastremski’s “Time” was 11th last year, and that is the second lowest placement for Belarus. I had warned fans last year that the middle part in his hair, like Jared Padalecki’s Dean character from Gilmore Girls, would steer him wrong.

This year, though, we got a bit of an insight into Belteleradiocompany’s (BRTC) thinking with ZENA’s “Like It.” ZENA had entered Belarus’s national selections for Junior Eurovision in 2015 and 2016, and was a co-host for the contest in 2017. Belarus intends to create a pipeline of talent from the junior ranks to the senior ranks, and we shall see if the juniors’ success can graduate to the senior contest in the future.

Belarus had a national final held on September 20, 2019. For those interested,this is what we thought of the ten acts that evening.

Here are the ten performers and songs, with the links embedded in the song titles.

Liza Misnikova was born on February 1, 2005, in Minsk, Belarus. For those wondering if Liza is a little too polished, she has been studying choreography for five years, currently attending Minsk’s Gymnasium 56. September 1st is Knowledge Day, should you wish to enroll your child there. Liza also receives vocal training, and has put in the effort and the years to excel at her craft.

Liza told junioreurovision.tv, “I always try to find time for travelling, studying foreign languages and mathematics, and spending evenings with my mom.”

“Pepelny” is composed by Kirill Good. He should be a familiar name to Junior Eurovision fans at this point. He attempted to enter on Belarus’s behalf in 2007, 2008, and 2009, but did not succeed.

He tried out for Belarus in the adult version in 2016 with “Running to the Sun,” coming in 3rd to Ivan’s “Help You Fly.” Kirill also composed Daniel Yastremski’s “Time.” “Pepelny” has lyrics by Natalia Tambovtseva and Liza herself.

Connor – 7 – “Ah yes, “Pepelny” from Belarus. I didn’t really see this winning the selection in Belarus, and you’ll remember I wasn’t the most kind to the song during our reviews on the Belarussian songs. I still feel pretty similarly now as I did then. It’s a fine song, and I enjoy this fun pop flare that it has, but it’s over produced and practically plastic. Now if they keep it similar to the performance I watched on a Belarussian lottery show, then I like it more. They turned down the robot sound a bit, and it sounds so much better and refined. Who knows what version we might get?”

Daniel – 6 – “This song is ushering a new decade for JESC, in terms of rhythm, maturity and sound. Similar to what they did this year in ESC, Belarus is ramping up the cool factor. If, and when, Liza hits those high notes, then this song will get Europe’s kid bopping.”

James – 5 – “I am in the loud segment that wishes singer / gelfling Mariya Yermakova and her Michael Soul penned “Vetra” had made it to Gliwice instead. I suspect Misnikova will do alright, even if the boy dancers in her video are dressed like the ’90s Canadian performer Snow and Minsk is portrayed like Edinburgh from the underrated Rhona Mitra film “Doomsday.” To be honest, I can’t be bothered about this one one way or another and will respect whatever fate the kids of Europe bestow upon this so-so pop number.”

Melanie – 5.5 – “Liza Misnikova is Zena 2.0. Everything about her just reminds me of Zena; the way she sings, the way she moves, the way she wear her clothes. It’s really just copy paste. I’m not a big fan of this kind
of singing and her moves on stage also annoys me a bit. But Liza knows how to sell this song. She’s energetic and brings it with alot of fun. But this is just not my cup of tea.”

Roy – 7.5 – “In my review of this song in the Belarussian selection I was critical and pointed out that it would be tough to pull a song like this off on stage. And boy did she pull this off live!! I was surprised when I only saw the result of the show, but afterwards I watched back the entire show. She stole it fully with her amazing attitude and her near perfect performance of this song. I always listen to the song on repeat when writing my reviews and I will give you a bit of a behind the scenes right now. I was doubting my score and wanted to put it lower by just listening. I clicked back to YouTube, saw her performing and went straight back to writing with my doubts being fully gone. This song also feels really child appropriate. I would have probably played this non-stop back when I was a child. This will probably not gain much attention from the judges, but it could snag some points from the online votes. I do feel like the staging will need a bit of an overhaul, but all in all I am very happy that this won in Belarus. Good luck to Liza and I hope she surprises a lot of people in Gliwice-Silesia!”

Sean – 6 – “This was one of the better options for Belarus in their selection but they should’ve gone for Mariya Yermakova in my opinion. Regardless, this is a fun stand-out entry with a catchy rhythm and probably fits in more with the whole Junior Eurovision ethos. Hand movements don’t really count as choreography though…”

Stefan – 6 – “Just like several other countries, Belarus is almost always coming with over the top extravagant performances and songs. However, this song can go either way. I don’t hate it, but I also don’t like it or have any strong feelings towards it. There were some much better songs in the NF, but we ended up with this one.”

Four countries in, here are our current rankings by ESC United editor scores:

“Pepelny” is neither loathed nor loved, with most editors feeling indifferent and scoring it in the very tight band of 5 to 7.5. We shall see at the contest whether or not the kids feel this song more than these eight old fossils.