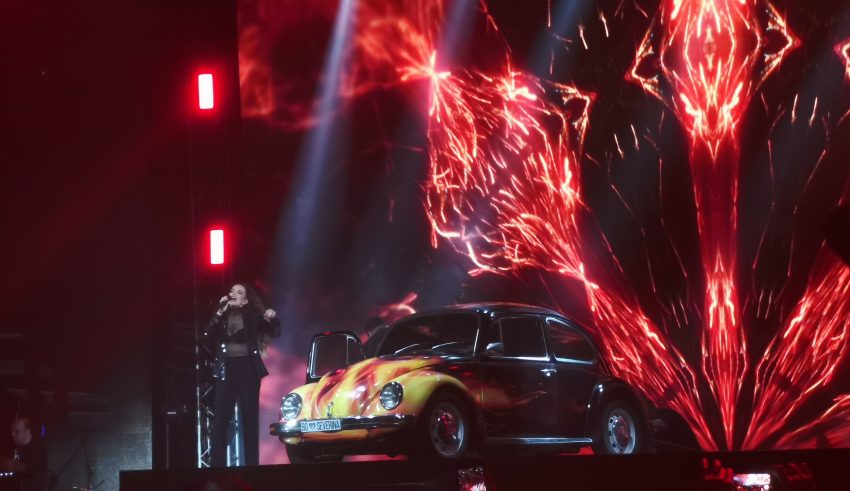 Our Balkan correspondent Stefan was at Croatian Eurovision icon Severina’s performance in Belgrade recently – find out how the show went below!

The Croatian representative from Athens’ Eurovision, Severina is currently on a local tour called The Magic Tour. After a concert in her hometown Split, the next stop was Belgrade and home of the 53rd Eurovision Song Contest in what is now called Štark Arena. The place was packed with almost 20,000 fans, as Severina was accompanied by a full orchestra, 25 dancers, several backing vocals, among whom was Andrej Babić, a composer who entered Eurovision six times, and who also wrote Severina’s song “Hurem”.

Severina opened the show with her upbeat hit “Otrove” (Poison) and the rest of the show was divided in four parts. She was greeted with huge applause and then she shook the audience with her hits “Brad Pitt”, “Dalmatinka” and “Generale”. After couple of ballads, the concert continued with banger songs “Uno Momento” and “Tarapana”.

Then it was time for the one of the many wardrobe changes and burlesque-like show songs “Virjen u te” and “Mili moj”. Her dancers had quite a task for the song “Mrtav bez mene” as they were hanging from the arena ceiling, and the dancers continued to give show big support during the song “Hurem”. After another change of clothes, it was time for “Tutorial” and her only guest came on stage. It was Ljuba, who won a locally popular children’s singing competition last year.

The hype continued with songs “Uzbuna” and, of course, her Eurovision entry “Moja Štikla”. Since Severina is going through a rough patch now, she talked a lot about the love and support that everyone needs from their family, before performing her latest ballad “Rođeno moje” while her son and husband came out on stage, making for a very emotional moment.

When everyone thought that the concert was over, there was a surprise when a video came on the screens and Severina returned to the stage driving a WV beetle and singing her hit song “Gas, gas”, composed by Goran Bregović, a widely popular artist and also the composer of the Serbian 2010 entry – Milan Stanković’s “Ovo je Balkan”.

In the coming weeks, three more concerts are lined up across the Balkans – in Zagreb, Ljubljana and North Macedonia’s capital Skopje. If you live nearby and you’re a Severina fan, be sure to check her website for tickets as you will enjoy the show for sure!

Check out some of the pictures from her show held in Belgrade last Saturday;

#YOU can listen to Severina’s latest track “Rođeno moje” below;

Have #YOU been to a concert from a Eurovision singer in recent months? Share your experience with us below, on our forum or on social media!