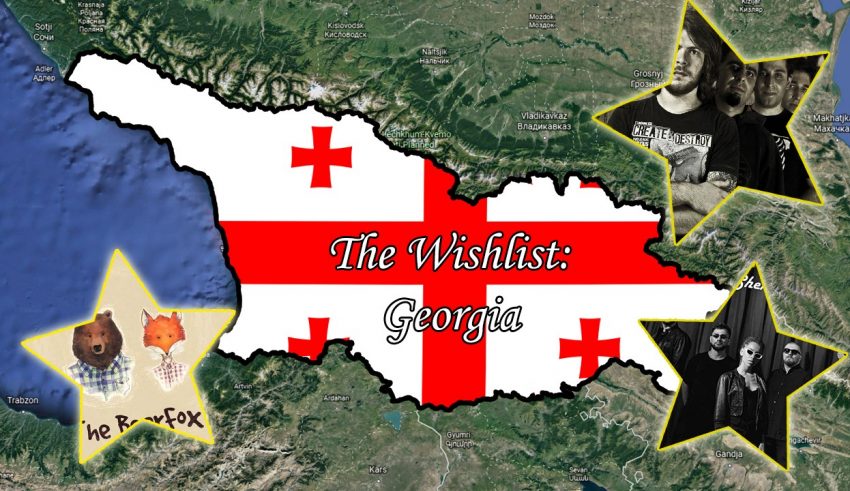 Eurovision has been a big platform for artists to kickstart their careers in the past. This is a beautiful thing in our eyes and we would like to make a contribution of our own. In our wishlist series, we want to put the focus on smaller intriguing artists to give them the spotlight that they deserve. We will go by every country and propose 3 artists that we found interesting. We are striving for a unique list with up-and-coming artists, but keep in mind that this is not always possible. Without further ado, let’s start our journey off with Georgia!

Let’s start our very first pick with a bang! The Bearfox is an experimental project by the 2 artists Betkho and Mebo. In 2013 it was originally planned as a one off collaboration, but their first song “Holding you” was well received. They decided to continue their collaboration and started appearing at festivals. The band is inspired by all natural things, ranging from mountains to humans and from forests to all kinds of animals. My favourite song of theirs is called “Isev”:

The BearFox would be a very interesting pick for Georgia. We have never heard anything in Eurovision before that could be compared to this. Their interesting compositions and atmospheric music could make for an amazing performance. Think of it like “Sebi” by Slovenia’s Zala Kralj & Gašper Šantl at this year’s contest. They created one big mood on stage where it felt like the audience were transported to a total different place or even planet. I feel like The Bearfox could achieve a similar, if not a better performance, at Eurovision. Besides my favourite song I will provide you with a second song and, of course, a live performance, the latter being very important and very impressive by The Bearfox. I find his voice to be very easy to listen to, which is a great aspect to get the people at home interested which will result into votes. A great artist to start off our wishlist series with, let’s move on to the second artist!

The second entry for Georgia is also a bit of a collaboration between artists. The band New One was formed in 2016. They had some succes straight away in Georgia and they also started appearing in surrounding countries. Singer Tika Balanchine appears on most of the great songs that New One produces, so why split them up? Their song “Artificial Love” has already received a ton of views, but my favourite song would have to be their more recent song called “Shentan”:

Their soulful electric sounds would be a refreshing sound for on the Eurovision stage. It is something that we have not really heard at Eurovision before and thus it could do surprisingly well. I must say that I wasn’t sold from the get-go, but after just a few listens I was sold. This could become a little issue to win the casual viewers for them, but I feel like the Eurovision fanbase would really embrace this kind of music. This could also become a hit with the judges since is has a modern sound to it and the live performance is also amazing. Another artist that Georgia should definitely consider in my eyes!

One more artist left for Georgia and what a way to end it. Scratch The Floor describe themselves as a modern heavy metal band consisting of 5 members. The band was founded in 2012 and has played on numerous concerts and festivals. Their success hasn’t been massive yet, but that could definitely change with participation at Eurovision. The type of (nu)metal they make is just right for it in my eyes. Not too loud , but still loud enough to completely tear down the show. I would recommend to listen to “At The Edge” first:

If you are like me and you don’t mind your music a bit louder and wilder, than I would definitely not stop listening there. My personal favourite would be “Rage” although this would not be suitable for Eurovision. There is definitely too much swearing involved and this may scare away the casual audience too much. I definitely see a whole lot of potential in this band and I really feel like it would be an insanely cool entry for Georgia. They have send some rock-songs in the past, so why not try again. It is most definitely unique and I would really applaud them for taking the risk. Curious for how they sound live? We got you covered!

That was it for the first country for our wishlist series. We will go by every country in a random order. So if #YOU have some cool suggestions for other countries, please let us know.

What do #YOU think about our picks from Georgia? Do #YOU think they were great and did we miss any cool artists? Share your thoughts with us on our forum HERE or join the discussion below and on social media!