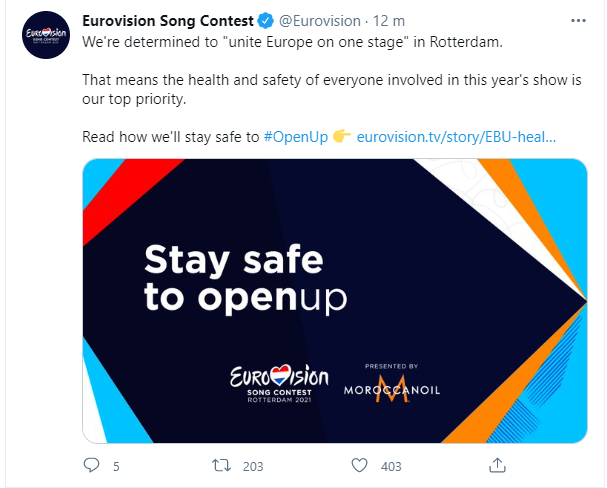 Good news, fans of Eurovision! Earlier today the EBU have released some new information on the contests organization and in doing so have reaffirmed ‘Scenario B’ as their preferred hosting scenario!

Now, ‘Scenario B’ is, in case you don’t remember, the so-called ‘Social Distancing’ Scenario. It’s the one where audience can attend the contest live, in social bubbles set 1.5 metres apart from one another. More importantly, it is also the scenario underwhich both the acts and the press are allowed to travel to Rotterdam. This means: Live acts on stage, not back-up performances under the current regulations.

Important to note however, is that it’s merely a ‘reaffirmation’, not a full-on confirmation. This means that the EBU retains the right to ‘downscale’ to Scenario’s C or D should the covid-19 situation worsen over the next two and a half months. Whether they will shall be determined at a later date.

To further illustrate the precariousness of the situation they have released an official health protocol. If you are interested in how the situation will be organized, I highly recommend reading through it. It is well-written and clearly illustrated.

The protocol itself was released via a press mail, and the measures in it apply to the press people specifically. However, those lucky enough to attend the contest in person will likely have to conform to similar measures. At the very least, it proves the EBU are very committed to making the 2021 Eurovision Song Contest into as much of a full event as possible and are leaving very little to chance.

Martin Österdahl, the executive surprevisor of the Eurovision Song Contest put it into words like this:

“The spirit and tradition of the Eurovision Song Contest is about uniting Europe on one stage and we are very much still determined to achieve this in Rotterdam in May. We are moving forward with our plans to produce a safe Eurovision Song Contest, with all artists performing live in Rotterdam. This protocol demonstrates our commitment to make this happen, with the health and safety of everyone attending, including crew and press, our top priority.”

The protocol has been written in collaboration with the VR-RR (Veiligheidsregio Rotterdam-Rijnmond) the government body responsible for health and safety in Rotterdam and its surrounding area. Afterwards the protocol was proofread and approved  by local authorities before being officially forwarded to the press earlier this morning.

To prevent further spread of the virus, “all those attending the contest” will be required to provide a negative corona test result, taken at least 72 hours before departure.  What ‘all those attending the contest’ exactly means is rather nebulous at this point, but it likely applies to press, artists, crew and audience members. After each delegation has arrived, they’ll be quarantined for five days in their hotel, heading only out for rehearsals, the live performances on the designated nights, or other contest related activities (such as press conferences).

Furthermore, a special testing area will be erected adjacent to the Ahoy Arena, to regularly test everyone on site (Press people, Crew members and performing artists alike.)

Sietse Bakker, who is the executive producer of the 2021 Contest, explains the reasoning behind these measures in the following words:

“Our goal is clear: to prevent transmission of the virus during the event. If someone tests positive, our isolation protocol comes into effect, we support the relevant authorities with track and trace research and we take additional measures where necessary. If a participant is unable to perform live as a result, the backup recording will be used.”

Regardless, it all means one thing: Eurovision is happening this year, and everyone is doing their best to ensure it will be the best possible experience for me and you.

If you wish to read up on the possible scenario’s, I will happily refer you to this official article by the EBU.