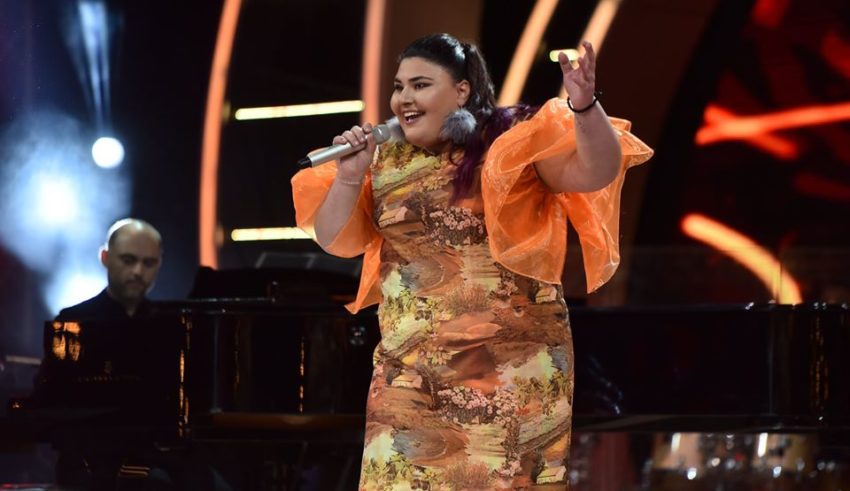 It is officially his crown to lose as Tornike Kipiani earned his fourth leader title in a row. In a Giya Kancheli themed episode, Kipiani experimented with a classical Georgian favorite and it paid off handsomely, as Kipiani ran away with the win with 29.09% of the vote.

Barbara Samkharadze came in second for the third week in a row with 17.75% of the vote, and has never been outside of the Top Three. Mariam Shengelia went home with 12.83% of the vote and Davit Rusadze, in the outsider group for the second week in a row, narrowly avoided elimination with 13.01% of the vote.

Tonight’s episode paid tribute to the late Georgian classical composer Giya Kancheli, who recently passed away on October 2, 2019, at age 84. Kancheli wrote many operas and orchestral symphonies, but is mainly remembered for his soundtrack work, composing the score for the some of the more famous films of Soviet cinema in the 1960s through 1980s, including “Mimino,” “Day is longer than night,” and “Khanuma.”

A couple months before his passing, Kancheli’s work was featured in a Eurovision contest, with a part from “Khorumi” being performed by Swedish choir Zero8 in the first round at Eurovision Choir 2019.

Each contestant was coached by Nikoloz Rachveli, a pianist and the principal conductor of the Georgian National Symphony Orchestra. He then conducted their live performance, providing his assessment of the singer’s strengths and how he selected the Kancheli song to pair with them.

Of Kipiani, Rachveli felt that he had to re-arrange “He is here” to suit Kipiani’s rock vocals, though he was worried the experiment was a 50/50 shot. Judge David Aladashvili, himself a classically trained pianist, praised the bold approach, saying the collaboration and a shift to A – B – A – A (Prime) in the chorus was inspired.

The fifth round results are, with percentage of votes and songs embedded in the song title, as follows:

Another pairing that received praise from both judges David Evgenidze and David Aladashvili were Barbara Samkharadze’s take on “The Magic Egg.” Rachveli, before the show, praised Samkharadze’s voice, though found it hard to find something from Kancheli’s repertoire, as he was mostly known for minor key melancholic compositions, something that does not suit Samkharadze.

However, Rachveli paired Samkharadze with “The Magic Egg,” a song from one of Rachveli’s animated film soundtracks. Samkharadze herself chose a bright orange dress to emphasize that, and earned praise from the jury for the overall performance. Evgenidze said the pairing of song and singer was inspired, and Aladashvili said the song was an example of “word paiting” in action, a musical technique where the notes literally reflect the lyrics (if the lyric is “high,” Samkharadze would have to hit a high note).

Gogiberidze managed to remain in 3rd for the second successive week, though Takalashvili, the Gori Girls’ Choir singer who came into the contest with a bang with an excellent cover of Jessie J’s “Queen” and won the first elimination round, should be concerned as she is in fourth this week and was only 0.81% away from elimination. Next week, we shall see if Queen Tamar can retake her crown, or if the Tornike Train keeps on rolling to Rotterdam.

Hosted by Ruska Makashvili, Star of Georgia or Georgian Idol is the Caucasus nation’s version of the Idol franchise. It is the second straight year the show will serve as the selection method for Georgia’s representative and song at Eurovision 2020, to be held in May 2020 in Rotterdam, the Netherlands. After tonight, the remaining five will be eliminated one by one by viewer votes until the Grand Final.

Do #YOU think Tornike Kipiani’s bold approach will backfire or get him the crown? Who do #YOU think is best suited to get the win if Kipiani falls? Let us know in the comments below, on social media, or in our forum.