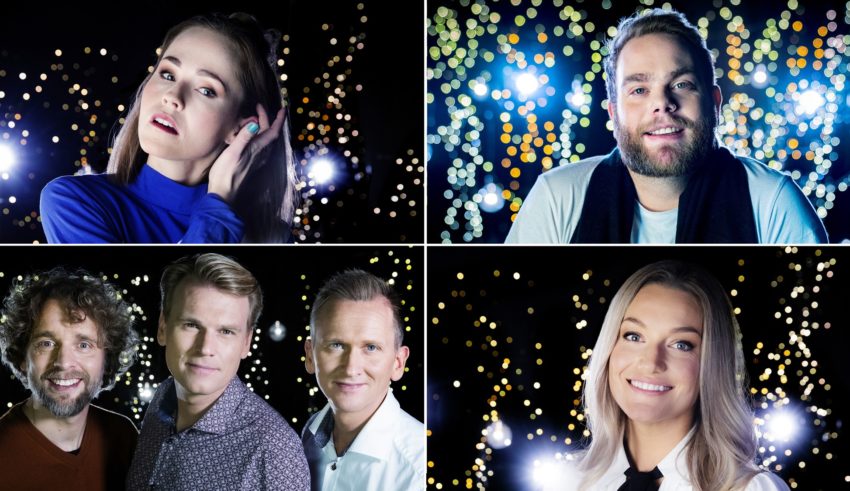 It’s the turn of the Western Norway artists to face the music tonight in Fornebu, and they will do just that against our panel this afternoon. Let’s see what our team thought of the Norwegian acts in Semi-Final 4! Today’s reviews come from Daniel, James, Melanie, Roy and Sean.

Daniel – 8 – “This is a fun, modern-sounding song that really spotlights Hege’s voice with a funky beat in the background to complement. There is some intrigue about the song, despite its rather standard structure. This is definitely going to be a moment on the stage of MGP. This might come on top in the semi-final, this might not, but at least Hege can feel happy about the crisp and clean sound that she has delivered.”

James – 6 – “I do like that we’re going in a more electro-pop direction with some rumbling bass and synth riffs tastefully popping in and out. The quiet part at the bridge works well. What doesn’t? The vocals kind of get lost. Hopefully Hege is charismatic enough to shine, but the song does not really demand much from her and with a restrained, simple track like this she really needs to take over and take charge. There’s potential here, but at present Hege is too much of a wallflower for anyone to take notice.”

Melanie – 6 – “I’m really loving the electronic beats in this song, but I’m so afraid how the paaaaAAAAAaaaaang would sound live. It’s sounding very computerish in the live-version, so there’s a big chance that it sounds very different live. I’m happy to hear some Norwegian in the national final. Give it a good show and Hege is a contender to go to the next round.”

Roy – 7 – “The song starts off really interesting and promising. Then Hege continues singing in Norwegian which is always a lovely sight. I love it when a song is performed in its native language in a country that barely does that. I am not so sure whether this chorus fully works. I find shouting Pang a bit uninspired and there was a lot more potential to make this an incredible song. It is still good however and I am looking forward to see this live performance.”

Sean – 6 – “Norwegian electropop? I’m listening! Hege Bjerk brings an interesting piece to the table, but I feel this is a case of the verses being stronger than the chorus, where it all seems to peter out. The production is great though, and will probably sound stronger in a live setting.”

Magnus Bokn – Over The Sea

Daniel – 6 – “This is a country ballad in the Nordic style that is super cute and uplifting. It is my genre of music usually, no not really. I mean having the fiddle/violin feature as the main driver in the chorus is a little too country and the key change seems more forced then some other songs. I do highly appreciate how sweet the song is, it is refreshing for the heavily synthesized music we have been seeing in national finals. That itself is worth the recognition, as well as Magnus’ final note, that was cool.”

James – 5 – “I made two New Year’s resolutions – don’t say mean things about Alexander Rybak or Jowst. That’s a challenge with this indie-folk song Rybak co-wrote and Jowst produced for Magnus Bokn. I seriously hope he doesn’t insert himself into the live performance, because that could detract from Bokn’s turn in the light. But then Bokn’s song is so light and not really memorable with a generic chorus and a phoned-in key change, he may need some star power to beef this up. Lyrically, it’s sort of positive. The lyrics are from someone not quite sure of themselves and how to navigate the future. Say what you will about Rybak and Jowst, they are performers not short on confidence. This song needs that in spades.”

Melanie – 5 – “The instrumentals in this song are amazing and it is such a great composition. Compliments to Alexander Rybak & JOWST on that. But at the same time, it’s also the big problem with this song. Rybak is trying too hard to show what he can do, that Magnus as an artist isn’t shining at all in this song, despite being the singer. I’m just more into the violin parts than the singing parts. So for me, Magnus is kind of a puppet on a string of Rybak. Please Magnus, don’t go to Eurovision with this song, but with a song that let YOU shine as an artist.”

Roy – 5 – “Seeing the picture, I would have expected Magnus to sing in Norwegian. Instead he gives us a singer-songwriter/anthemic song that “drops” into some odd country melody. This is a bit of a Frankenstein song and I am not really sure if it works for me. The pre-chorus builds up to something totally different than what it actually is. It is just a bit too much of a mess for me to fully get into the song. And that says something, since I usually enjoy messy songs.”

Sean – 5 – “You can certainly feel the Rybak and JOWST influence in this track. It’s a little too beige for my liking and is something that I feel would be more accustomed to Ireland than Norway, but I guess we always have to push boundaries in Eurovision! I find this pleasant but a little twee and a bit too generic to make it all the way through Melodi Grand Prix.”

Nordic Tenors – In This Special Place

Daniel – 7 – “What can I say, I am a sucker for this genre of music. Romantic ballads can be magical, relaxing and epic and that is what I feel this is. Is it so 90’s? Oh yeah, but because of the genre it can get away with it more easily than other songs. It is not the most interesting romantic ballad this year and the lyrics are quite cheesy (but a cute cheesy though). I think this song represents the concept of “a perfectly good entry.”

James – 7 – “Say what you will about this entry, the Nordic Tenors will do gangbuster business in places like Fort Lauderdale and Orlando, Florida. I personally enjoyed this song, but this hasn’t a snowman’s chance in hell of making Eurovision. This song is tender, warm, and romantic, performed by three talented tenors whose CDs and performance DVDs will be used for a PBS pledge drive sometime in the future. This is so out of place at MGP 2020, but they’re not the only act of this type to have entered a national selection and with the resurgence of New Age this year, maybe they’re banking on a collective losing of the Eurovision mind to make it? I’ll stop with the poo-pooing of chances, though, because I will be checking out their back catalog on the strength of this song, even I suspect I am the only one from ESC United to do so.”

Melanie – 3 – “So I went a month ago to the musical Annie, and “In This Special Place” sounds like a song that came right out of this musical. I see Annie meeting her parents in some kind of special place while singing this song. We all know that Annie in the story would never meet her real parents, and the Nordic Tenors likely would never sing this song on the Eurovision stage. This song belongs more in a Broadway musical, because you need a visual story to really bring this song alive. By itself, it isn’t strong enough to stand out.”

Roy – 3 – “The song started and my cringe radar immediately started going off and it never stopped in the duration of the song. This type of magical Disney song worked for Kazakhstan last year at Junior Eurovision, but this is definitely not good. It lacks energy and it doesn’t ever really interests me. The live vocals will probably be really good, but I would skip this…”

Sean – 1 – I don’t believe in giving out a full-on zero because every song takes effort and determination to create, but this is absolutely not my thing at all. Like, AT ALL. It would be perfectly at home in a Disney film or a musical and I’m sure it’ll have fans but this is too far removed from my personal tastes.

Oda Loves You – Love Who We Love

Daniel – 5 – “It goes from slow to this fast-paced dynamic pop-entry. I tend not to love ohhhh ohhhh ohhhh choruses because I feel like those are cop outs for potentially impactful lyrics. Especially since the verses and bridge make me believe that this song means more and has a meesage behind its bubble gum pop exterior. Finally, the part in the middle before the final chorus was totally unnecessary in my opinion as well. Overall, not a homerun at MGP.”

James – 6 – “If this doesn’t make it at MGP 2020, Oda should try get this as the official song of “90 Day Fiance.” But the repetitive chorus is weird. Isn’t it rather obvious that the ones we love are the ones who we love? Or is it a clunkily phrased pride anthem (i.e. we don’t have a choice in who we love, same sex or not)? I’m for fun, empowering dance songs, but this one misses the mark in a few areas.”

Melanie – 5 – “Oda Loves You (Is this really her stage name??) gives us a very fun song. It’s very cute and reminds me of the popular pop songs when I was younger. The lyrics are written in a way that you can easily sing-a-long. Nevertheless it’s nothing special and we’ve heard these kind of pop songs before. Norway need something more special to win Eurovision.”

Roy – 6 – “Firstly, what is up with this name? It is too in your face, what’s wrong with just Oda? The song itself isn’t half bad and is a modern rendition of a Scandipop song from about 10 years back. This will be a massive party on the stage and I am looking forward to seeing it. The lyrics could have been more interesting, but the song is good. Nothing special, just good.”

Sean – 7 – “A pretty decent but standard pop song with not much else going on. The echoey bridge is interesting and lifts the song in the final third but I’m not sure how this could be portrayed live while staying within the current Eurovision ruleset. It’s probably the best in this semi though.”

So, what does that mean for the scoreboard? Let’s see…

So not much in it in this semi-final, but we as a team are backing Hege Bjerk as tonight’s qualifier? But will the Norwegian public agree with us? We’ll find out shortly!

Do #YOU agree with our thoughts on the Norwegian semi-final? Share your thoughts with us on our forum HERE or join the discussion below and on social media!