Home 2021 Switzerland: Gjon tears through a universe of melancholy 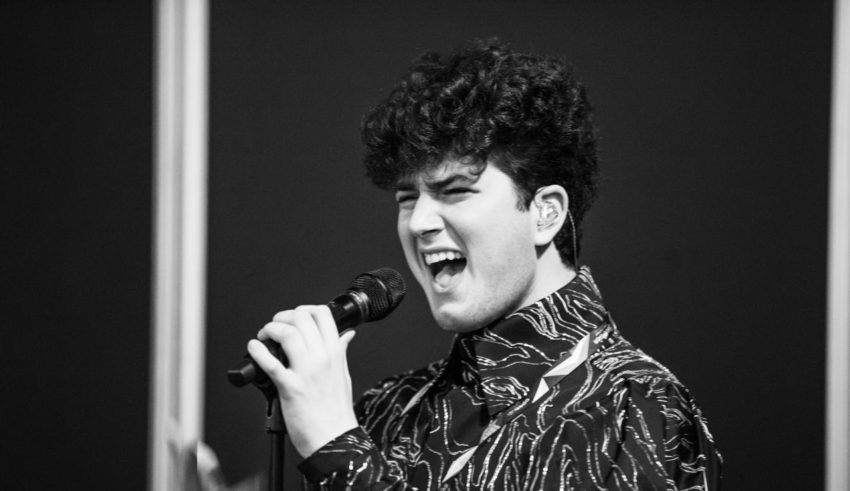 He was a hot favourite going into rehearsals today, but did Gjon Muharremaj live up to expectations?

Gjon’s rehearsal was a surprise to many in the press centre. Many of us were expecting a composed performance behind a piano, but instead he’s performing an artistic choreography. Switzerland utilize the avant-garde angle of their song hard in this performance.

Gjon starts off on a series of interlocking L-shaped polygons. He’s wearing a wide dark purple shirt with silver stripes, tucked in into his trousers. The Swiss singer of Kosovar origins looks very dapper on the stage, as he waves his arms around in a very eloquent fashion. The backdrop is dark and desolate.

During the performance, Gjon moves back and forth on his platform, engaging in more signature hand choreography, using his body to convey the song’s melancholic energy. This (fairly simply) concept is supported by sharp camera angles and quick camera shots, creating an illusion of tempo. The performance is good, though the main issues with Gjon’s charisma (his facial twitches and marmite-y falsetto’s), are currently unresolved.

Overall, I (a staunch Gjon skeptic) enjoyed this performance. Swedish choreography Sascha Jean-Baptiste provided Switzerland with an artistic act that holds a middle between Kristian Kostov (also SJB) and Loïc Nottet. The former finished second, while the latter secured a fourth place. Will Switzerland clinch a third place, then?

What do #YOU think of  Gjon’s rehearsal? Did he rock your entire universe? Share your thoughts with us in the comments, on our forum HERE or on social media!