Home 2021 Latvia: The Blood Moon Has Risen for Samanta Tina 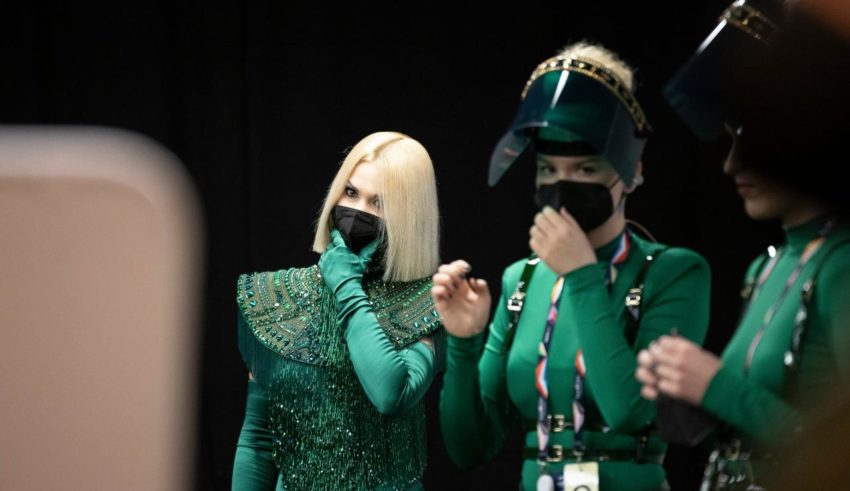 Get ready for a Pa-ra-ra-pa-Parade from Latvia. Samanta Tina has (finally) made it to Eurovision, where she’s just completed her first rehearsal.

Latvia showed a surprising lack of variation. Samanta is dressed in a frilly green dress, her three backing singers in green jumpsuits with visors (similar to “Still breathing”, actually). She has a gorgeous golden psychedelic back- and floordrop, featuring a large hand-crown. The camera cuts back and forth between Samanta, wide shots of the stage and close-ups of her backing squad.

And yet, despite the strong visuals the whole is a bit underwhelming. Latvia have no further tricks up their sleeve beyond the funky choreography they have prepared and Samanta’s inate Samantaness. Near the end we have an Augmented Reality effect of Samanta kicking (?) gold sparks towards the camera, but otherwise, it’s three minutes of Samanta doing Samanta things on the Eurovision stage. We liked it, but we also felt that Latvia isn’t making the most of their song’s crazy potential.

What do #YOU think of  Samanta’s rehearsal? Are you mesmerized, idolized? Share your thoughts with us in the comments, on our forum HERE or on social media!