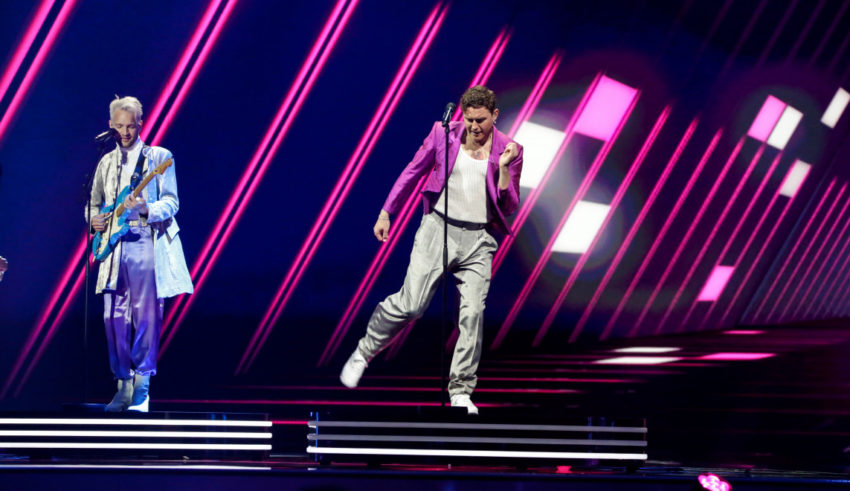 The Duo Fyr og Flamme is representing Denmark this year. Today was their first rehearsal, let’s find out if they will set the press room alight.

The right word to describe Denmark would be: “Familiar”. The duo wore the exact same outfits as in the national final and also the podium’s they were standing on were brought to Rotterdam. They had 3 back-up singers perform on stage as well and the overall feeling and idea of the DMGP staging was kept exactly the same.

What did change however is how much more polished and slick the performance is and looks. They fully cash in on the 80’s retro vibe with plenty of purple coloured squares. In the choruses they kind of enter a triangular shaped tunnel. The first chorus has a pyramid shape, where in the second chorus it is more the shape of the actual stage. Where it also differs from the DMGP performance is the running part. Yes, there is still running, but now he runs to the front small stage of Ahoy rather than run around randomly and end up on the same platform as his partner. Overall it is just a way more polished and slick performance of what was already there.

I think the stage design of DMGP didn’t do the song much justice and it felt a bit claustrophobic at times. With the Rotterdam stage however, the song gets way more time to breathe and there is more room to perform. The LED backdrop is excellent and it is a big improvement from a skeleton that they already had.

What do #YOU think of  Fyr og Flamme’s rehearsal? ? Share your thoughts with us in the comments, on our forum HERE or on social media!