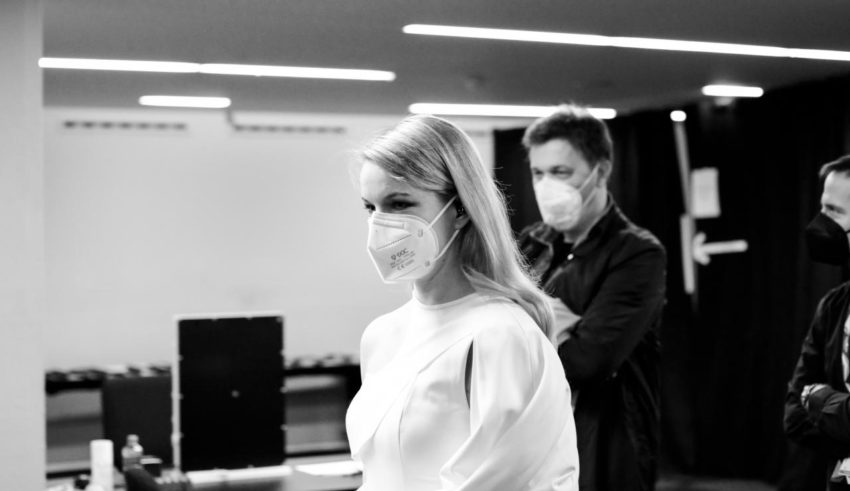 Hallellujah from Rotterdam! The second country just took the stage. We’re now going to dish out all the relevant new info we have on Slovenia.

Slovenia’s staging carried on the backs of several good backdrops. It starts fairly humble, with Ana on the stage, against a horizon. Once the first chorus hits, the backdrop transforms into a shower of golden orbs, like a fiery rain cascading down around Ana. It is evocative of Serbia’s 2019 entry, “Kruna” by Nevena.  The screen then transitions into a giant Earth globe

Later, the backdrops transforms into stock footage of various landscapes, including a lake, a mountain range and a canyon. Ana walks barefoot on the catwalk. She is wearing the same white pantsuit with an asymmetrical cape we saw her wear during the song presentation.

The sound was largely absent from the first rehearsal. Ana sang completely in tune during the second rehearsal, showcasing her voice. She looked a bit tired (jetlagged?) however, leaving some room for improvement.

Overall, Slovenia left a positive impression with their visuals and vocals. The question is whether they’ll remain memorable after 14 more songs have played.

#YOU can watch footage of the rehearsal here:

Join us from the press centre for that juicy live rehearsal coverage.

Hey child, what did #YOU think of Ana’s rehearsal? Was it as glorious as you’d thought it’d be? Share your thoughts with us in the comments, on our forum HERE or on social media!