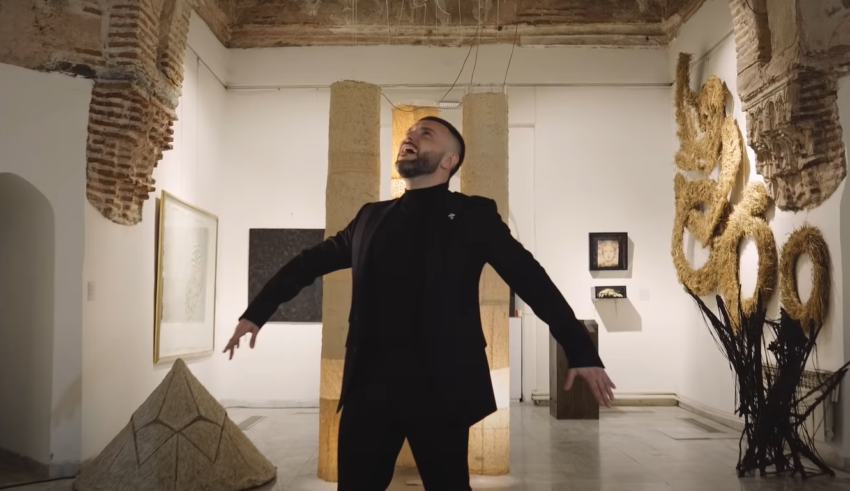 Our second profile today is a particularly interesting one as we detail Vasil Garvanliev’s long and varied career to date, taking in over 5 countries and various genres and styles, leading up to his Eurovision participation in Rotterdam this year…

Long story short, he is one of the most colourful personalities in this year’s contest, with a long history of performing who has finally earned his right to go to Eurovision as North Macedonia’s artist! Vasil Garvanliev was born in Strumica in the south-east of North Macedonia, nearby to the border with Bulgaria, on 2nd November 1984.

His career as a singer began at a very young age, when he was discovered performing on the streets at the age of seven by a Macedonian composer who lived nearby, after his mother urged him to perform a Mariah Carey song in public. At the age of eight, he released his first collection of music which includes the Japanese-inspired “Marionka”, a song that still endures as a Macedonian children’s classic following his 1994 performance of the song at the Zlatno Slavejče children’s festival.

Vasil and his family moved to the United States in 1997 due to the effects of the Kosovo War, with Vasil openly discussing his experiences of bullying in various interviews; he told the Toronto Star in 2011 “no matter who bullied me, whenever I’d sing, they would shut up. I would pick out the bullies, sing right into their faces without fear and that would intimidate them.”

He became a member of the Chicago Children’s Choir in 1999. Soon after, he emerged as a main soloist for the choir, performing at Carnegie Hall and alongside the Chicago Symphonic Orchestra. His opportunities with this choir led to his growing stature Stateside, and saw him perform as a backing vocalist for the likes of Julie Andrews, Céline Dion, Enrique Iglesias, New Kids on the Block and Nelly Furtado.

Vasil and his family were deported from the United States shortly after 9/11 following a crackdown on immigration, after it was discovered the family had insufficient paperwork to stay. After short stays in Milan and London where he unsuccessfully applied for scholarships, he moved to Toronto in 2004 and took up a scholarship at The Glenn Gould School. Here, he earned various diplomas and accolades in operatic voice and performed as a baritone. He performed as a guest artist with the company Opera Atelier between 2005 and 2014.

In 2016, he was credited as a backing vocalist on Chance the Rapper’s album “Coloring Book”, appearing on four tracks. He returned to Europe in 2017, first in London before returning to his native land of North Macedonia in 2018 where he began to forge a career as a pop artist.

How did Vasil get to Rotterdam?

Vasil’s Eurovision story is a long and winding one, with his first attempt to represent his country coming in Skopje Fest 2007, where he finished 13th with the self-penned “Pomogni me”.

He made the Eurovision stage in 2019, performing as a backing vocalist for Tamara Todevska’s entry “Proud”, which earned North Macedonia’s best result in its Eurovision history and topped the jury vote across Europe. Having impressed in his participation in Tel Aviv, the Macedonian broadcaster MRT invited Vasil to represent the country in Eurovision 2020, with his internal selection confirmed on January 15th 2020.

His waltz-inspired pop entry “You” was revealed on March 8th 2020, ten days before the contest would be cancelled by the COVID-19 pandemic. Unlike some of the other returning artists to Eurovision 2021, Vasil was made to wait for his chance, eventually being re-confirmed as North Macedonia’s representative on 20th January 2021.

Following a song submission period for interested composers, Vasil’s new entry, “Here I Stand” was announced on February 16th, and premiered on the Eurovision YouTube channel on March 11th. The dramatic, soaring ballad was written and composed by Vasil, Borce Kuzmanovski and Davor Jordanovski, with the intro to the music video depicting Vasil’s candid discussion of his feelings around the Eurovision 2020 cancellation and his return to the contest.

How has Vasil been preparing for Eurovision since his selection?

Well… let’s just say that Vasil has not exactly had a fair run at preparing for Rotterdam since the songs were all released. The original music video for his track “Here I Stand” stirred controversy in his home country due to a piece of art showcased in the gallery the video was filmed in that bore a similarity to the Bulgarian tricolor – white, green and red. Vasil’s Bulgarian citizenship, coupled with historical issues between the two countries, led to an outcry, with the video eventually being edited to remove this artwork.

The art piece in question was in fact the work of an artist called Janeta Vangeli and is inspired from Jesus Christ. When addressing the controversy, Garvanliev told supporters “I am a music ambassador, and in music there is no religion, politics, orientation, race or color. I had absolutely no intentions to hurt anybody. Quite the opposite!”.

Following the subsiding of this controversy and Vasil’s continued participation in Eurovision 2021, he released a medley of Eurovision songs on his Instagram page on 9th April, featuring songs from Kaliopi, Tamara Todevska, Netta and Azúcar Moreno. With the post, he shared another message of positivity; “Stay strong, be you, and always go from truth. We will silence the hate with love, positive energy, and beautiful music. Here we all stand united as one heart through music.”

Vasil will also take part in Eurovision Spain’s PreParty ES on 24th April, and continues to have a strong presence on social media and high interaction with his fanbase in the build-up to the contest.

North Macedonia’s Vasil will perform “Here I Stand” in the first semi-final of Eurovision 2021 on May 18th, performing sixth on the night.

What do #YOU think of North Macedonia’s entry for 2021? Share your thoughts on this article in the comments below, on our forum HERE and on social media!