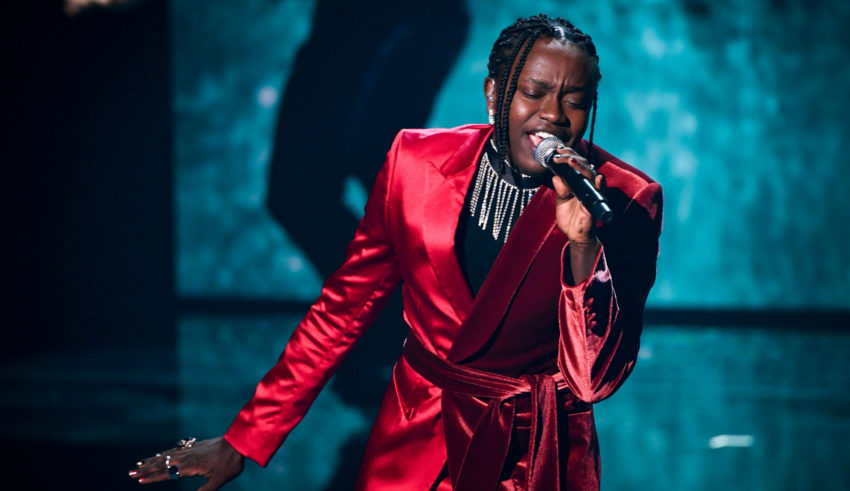 Today, it’s the turn of Melfest victor Tusse, who has been through a lot to get to this point…

Tusse has certainly had to work hard to get to this point, and perhaps has one of the more poignant back stories of this year’s entrants. Born in the Democratic Republic of Congo on 1st January 2002, Tousin Michael Chiza (or when he’s on stage, Tusse) is already making big moves in Sweden at the age of just 19.

He is a refugee from war in his home country, having fled at five, spending time in a refugee camp before he arrived alone into Sweden at the age of eight and coming under the care of various foster families before settling in Kullsbjörken in the centre of the country.

During his Melfest participation, Tusse shared more stories of his struggle; ““I’ve had a very rocky time because I came to Sweden without my parents, and it’s been a challenge moving from family to family for different reasons. It’s been tough, but now I think I’m on the right track, and it feels much better.”

Tousin Chiza (as he was publically known at first) came to public knowledge in Sweden by participating in the TV4 talent show Talang (the Swedish version of the popular Got Talent series) in 2018, making it to the live shows but being eliminated in the semi-final.

A year later, he appeared as Tusse Chiza in the fifteenth season of Swedish Idol, notably covering Conchita Wurst’s “Rise Like a Phoenix” in the live shows to an overwhelmingly positive reaction.

Tusse won the competition on 6th December 2019 and released his winner’s single, “Rain”, reaching #63 in the Swedish charts. His first two post-Idol singles were in Swedish and released in 2020; “Innan du går” and a cover of the summertime song “Jag tror på sommaren”.

How did Tusse get to Rotterdam?

Like all Swedish Eurovision hopefuls, it’s a real battle to even get to the contest in the first place. Of course, Tusse had to enter Melodifestivalen, and was a debutant in the competition in 2021.

Tusse first performed his entry “Voices” in the third semi-final, closing the show and topping the semi-final voting, with nearly 2 million votes received for his entry. He went ‘direkt til finalen’ alongside Eurovision 1999 winner Charlotte Perelli’s “Still Young”.

Tusse then performed seventh on the night in the Melodifestivalen final on March 13th, in a star-studded line-up including last year’s winners The Mamas, former Eurovision participants Eric Saade and Arvingarna and numerous other familiar faces in the Swedish music scene.

In the end, he was selected as the winner of the competition convincingly; he topped the international jury votes and then earned maximum points from the televoting to take a commanding margin of victory. In raw numbers, “Voices” earned the highest number of votes in Melodifestivalen history, and Tusse’s place at Eurovision 2021 was in little doubt!

On his victory, Tusse told Shima Niavarani; “The journey here has been difficult for me as a person. That it has inspired people, that it has taken me here and made me who I am today. I’m so proud of who I am today. To get out on the other side when you have experienced a lot of negativity, then there is only positivity left.”

How has Tusse been preparing for Eurovision since selection?

Well, the first thing he did was get back to his academic studies, confessing to Melfest co-host and Eurovision winner Måns Zelmerlöw that his participation in the competition saw him falling behind on his science assignment; “Oh no, I’m way behind” thelocal.se reported, “I don’t want to let my teacher down”.

Outside of his studies, Tusse has been hard at work preparing for Eurovision with a number of domestic TV appearances and interviews, with the singer also releasing an acoustic version of “Voices” yesterday

Earlier today however, it was revealed that Tusse would undergo a minor operation for his doctor to “look a little closer” at an issue with his voice that the singer reportedly dealt with for “a little while now”, having first mentioned the struggle after his victory in Melodifestivalen. But, following the operation and a week of rest at home, Tusse should be fighting fit and ready for Rotterdam!

Sweden’s Tusse will perform “Voices” in the first semi-final of Eurovision 2021 on May 18th, performing fourth on the night.

What do #YOU think of Sweden’s entry for 2021? Share your thoughts on this article in the comments below, on our forum HERE and on social media!