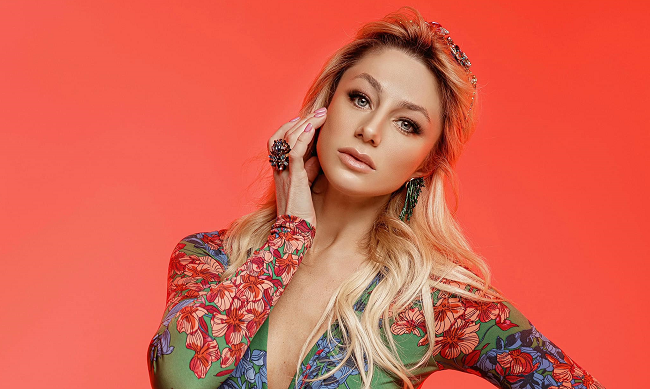 Today we turn to something sweet, as we profile Natalia Gordienko and her return to the Eurovision stage after fifteen years away!

One of Eurovision 2021’s more experienced performers at the contest, Natalia Gordienko is a Moldovan singer and dancer of Ukrainian descent, born in Chișinău on 11th December 1987.

Natalia was involved with music at a very young age, first making a public appearance for singing at the age of 10 on the children’s program “Golden Key”. She had enrolled into musical school from early on in her life, studying for more than seven years in piano while also participating in her school’s choir and dancing in her school’s ensemble for more than a decade.

After her graduation from high school, Natalia enrolled in the Academy of Music, Theatre and Fine Arts, specialising in pop and jazz vocal departments. She began to take part in singing competitions both in Moldova and internationally from 2003, earning second place in a Radio Moldova competition and the grand prize of “The Star of Kishinev” and “Miss Teenager 2004”. She also performed at Rainbow Stars in Jūrmala, Latvia in 2004 and won numerous other singing competitions in Ukraine, Moldova and across Eastern Europe.

In 2005, Gordienko became a singer in the group Millennium, who were invited to participate in Romania’s annual Golden Stag Festival in that year alongside big name acts such as O-Zone, Natalie Imbruglia and Joe Cocker, as well as Malta 2007’s Olivia Lewis.

The connection with O-Zone, arguably Moldova’s biggest musical export, would continue into the next years, including her Eurovision participation in 2006. In 2008, she was awarded the honorary title of “Emeritus Artist” of the Republic of Moldova.

Natalia begun to release solo music in 2010 with her debut album “Time”, followed a year later by a sophomore effort “Canuna de flori”. She continued to release music throughout the 2010s, including “Habibi” which featured Swedish artist and later Melodifestivalen participant Mohombi in 2016.

How did Natalia get to Rotterdam?

As we mentioned above, Natalia is no stranger to the Eurovision stage, and is one of only three of this year’s artists who have featured as a main performer at the contest prior to this year.

Natalia was in fact not originally in the running to represent Moldova in Eurovision 2006, with the Moldovan national broadcaster TRM organising “O melodie pentru Europa” in two stages in February 2006. Natalia was not in the participating acts, however a three-way tie in the final and TRM’s dissatisfaction with the end result saw the broadcaster sensationally organise a last-minute second selection show.

In this second show, Natalia was chosen to be one of the five participants, alongside O-Zone band member Arsenium and Romanian rapper Connect-R with “Loca”, a Latin-inspired midtempo pop song. The track won the second Moldovan final, with a strong televoting score and top marks from the jury, and Natalia, Arsenium and Connect-R qualified directly for the final of Eurovision 2006 in Athens thanks to Moldova’s strong finish in 2005.

The song did not fare well, earning 22 points, 12 of which came from Romania, and the trio finished 20th on the night.

After a number of years working on solo music and enhancing her profile as a performing artist, Natalia returned to contention for Moldova in 2020 by entering “Finala națională 2020”. Her entry, the mysterious electro-ballad “Prison”, was the brainchild of the ‘Dream Team’ production team; Dimitris Kontopoulous, Philipp Kirkorov and Sharon Vaughn. The song topped the jury voting and televoting, but the cancellation of the contest on March 18th meant that Natalia would have to wait for another shot at Eurovision success.

Having to endure a nervy wait to see what TRM’s plans for Eurovision 2021 would be, Natalia was finally re-elected as the Moldovan entrant for Rotterdam on 26th January this year, with the entry to be internally selected. Once again, the track was produced by the ‘Dream Team’, and after a lengthy, glitzy reveal show held by Kirkorov in Moscow, the entry “Sugar” was finally revealed to the Eurovision community.

How has Natalia been preparing for Eurovision since selection?

Much of her promotion for the contest has centred around Moldova, Russia and Romania. Natalia Gordienko first performed “Sugar” on stage at the Kremlin in Moscow on March 8th at a presentation show of Russian fashion designer Valentin Yudashkin.

In late March, the Moldovan delegation and Natalia’s team flew to Sofia as one of six countries to film their live on-tape performances in the Bulgarian capital, with Natalia also taking the opportunity to promote her entry on Bulgarian TV and film elements of the Moldovan postcard for Rotterdam.

Rehearsals continued into April, with Natalia sharing details of her multi-national performance group for Rotterdam; dancers from Moldova, Russia, Ukraine and Greece will accompany her on stage in the Netherlands! A Russian version of her Eurovision entry was revealed on April 9th.

On April 15th, Natalia posted on Instagram as she took in a promotional tour of Bucharest, the city “I really missed” and where she “lived many magical moments”. Sharing her delight at the tour, she posted “Wherever I go, they treat us like true friends. I’m not talking about me, but about Moldovans in general! Indeed, Romanians love us very much and I am proud of that!”

Moldova’s Natalia Gordienko will perform “Sugar” in the second semi-final of Eurovision 2021 on May 20th, performing seventh on the night.

What do #YOU think of Moldova’s entry for 2021? Share your thoughts on this article in the comments below, on our forum HERE and on social media!