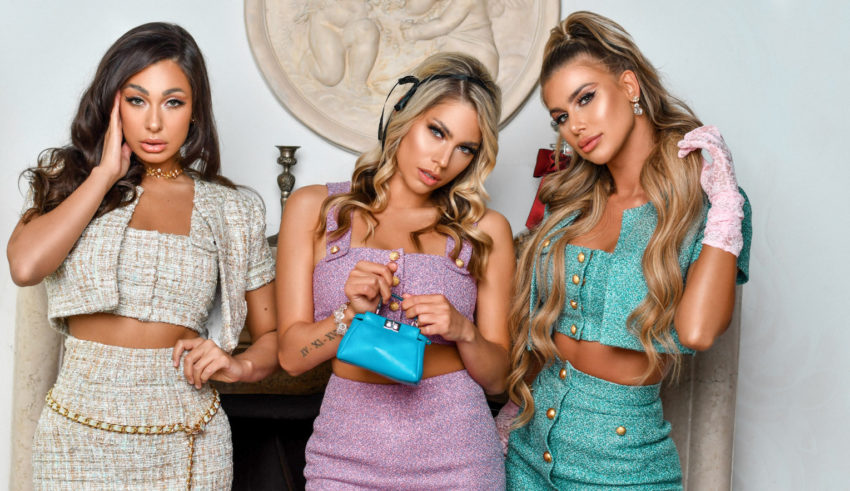 Next, we look at a group who have taken Serbia by storm… if you’ll pardon the pun! Racking up millions of views and with two experienced Eurovision alumni in the line up, Hurricane are certainly one to watch in Rotterdam…

Hurricane, previously known as the Hurricane Girls, are a three-piece girl band from Serbia, who were formed in 2017 by Zoran Milinković on Saint Martin. The name of the group comes from when Milinković took part in clean-up operations following devastating hurricanes in the Caribbean, namely Irma and Maria. Upon returning to Serbia, he formed the three-piece girl group to further support the restoration and clean-up operations of the island and to further raise awareness of the issues faced in the region.

The group consists of Sanja Vučić (born 8th August 1993 in Kruševac), Ivana Nikolić (born 16th April 1995 in Niš) and Ksenija Knežević (born 24th January 1996 in Belgrade), and the group’s first single “Irma, Maria” was fittingly named after the hurricanes that hit the island of Saint Martin in 2017.

Sanja Vučić is a familiar name for Eurovision fans, having represented Serbia solo in 2016 with “Goodbye”. The performer graduated from the musical high school in Kruševac having majored in singing and went on to perform in the bands White Fairy and ZAA. Ksenija Knežević is also a familiar name for the Eurovision community, with her father Knez representing Montenegro in Eurovision 2015. Ksenija featured as a backing vocalist for the performance in Vienna of “Adio”.

Ksenija is a piano major and has featured as a vocalist at various concerts, festivals and performances in Serbia, including as a backing vocalist for Željko Joskimović, Dado Topic and SevdahBaby. Ivana Nikolić’s background is more in dancing, having enrolled at the Boom 018 dance school in Niš and performing in dance competitions both internationally and domestically during her six-year stay at the school.

Hurricane’s career as a three piece has seen them release a number of singles from 2018 onwards, with a number of songs reaching an astonishingly wide audience on YouTube; namely “Favorito” (79 million views), “Folir’o” (37 million), “Avantura” (32 million) and “Brzi Prsti” (19 million), as well as 25 million views for their 2020 entry. In 2019, it was revealed that Hurricane had plans to release songs with the global label Universal.

How did Hurricane get to Rotterdam?

As already covered, two of Hurricane’s members are already experienced in Eurovision circles, with Ksenija appearing as a backing vocalist in 2015 for Montenegro and with Sanja representing Serbia in 2016 with “Goodbye (Shelter)”.

Hurricane’s first appearance in a Eurovision context came in 2020, as they were entered into the Serbian national selection for Eurovision, Beovizija, and were revealed among the 24 participants in the competition on 9th January 2020. Their entry “Hasta La Vista” was an instant hit, topping the televoting in the semi-final as well as the jury voting. Hurricane repeated the feat in the final, finishing 6,000 votes ahead of Andrija Jo in the public vote but nine points clear of second placed Naiva to represent Serbia in Eurovision 2020.

Unfortunately, as we all know by now, the 2020 contest was cancelled on March 18th, but Hurricane were eventually confirmed as the 2021 representatives on 17th December 2020. While it was initially reported that a special edition of Beovizija would take place to select Hurricane’s entry for this year’s contest, an internal selection was eventually made.

How have Hurricane been preparing for Eurovision since selection?

The group have been incredibly active on the promotional trail with a number of outlets, music channels and media in Serbia, with a number of their interviews featured on their YouTube channel.

On April 17th, the group performed a cover of Ukraine’s Eurovision 2004 winning entry “Wild Dances” on the RTS programme Studio, while a documentary looks set to be released about the group’s formation and the meaning of their foundation. A teaser for the documentary was released on April 21st.

Hurricane released an English language version of “Loco Loco” on April 30th 2021 with a live performance video appearing on the Eurovision YouTube channel. An acoustic version of the song followed on May 6th as the trio prepared to fly to Rotterdam, ahead of their first rehearsal tomorrow.

Serbia’s Hurricane will perform “Loco Loco” in the second semi-final of Eurovision 2021 on May 20th, performing ninth on the night.

What do #YOU think of Serbia’s entry for 2021? Share your thoughts on this article in the comments below, on our forum HERE and on social media!