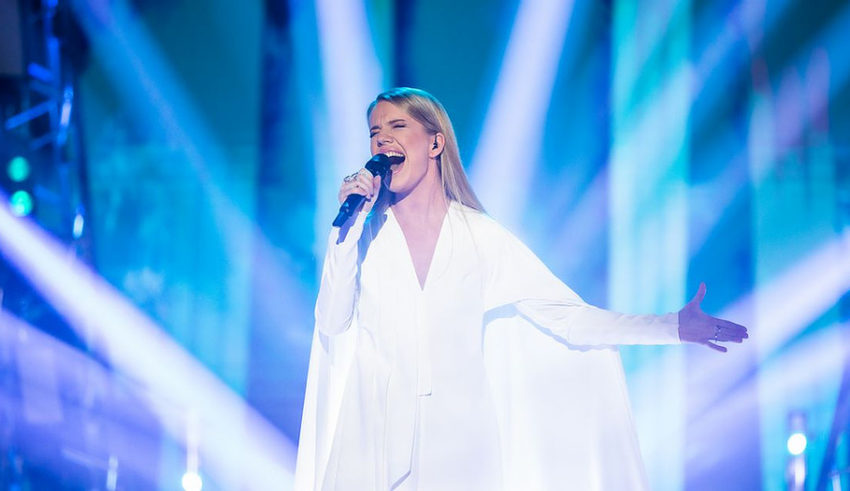 Next up is Slovenia’s Ana Soklič, an artist who has been waiting a long time to represent her country at the contest, from her first attempt in 2004 to realising her dream this week!

Born in Savica in the north-west of Slovenia on 10th April 1984, Ana Soklič has been active in the music industry for a number of years.

According to Govorise, she was fascinated by music as a child and was first interested in performing in the fifth grade of primary school in Slovenia, performing a song by Darja Švajger to her school.

Her first experiences in the music industry came as part of the Diona Dimm project, an alternative rock group in Slovenia that consisted of Soklič, Bojan Simončič and Gašper Kačar. The group twice tried to represent Slovenia at Eurovision, participating in EMA 2004 with “If You” and in EMA 2007 with “Father” but were unsuccessful on both occasions. The group also took part in the “Slovenska popevka” and “Melodije morja in sonca” festivals.

During her time in the group, Ana lived in Sweden due to their contract with the publishing house TMC. Diona Dimm’s contract with the Swedish label expired in 2011, and the band subsequently parted ways, opening the door for Ana to begin a solo career.

She first came to prominence as a solo singer in 2012 when she appeared in the only Slovenian edition of The X Factor, eventually finishing in fifth place after making it through five live shows in the competition. She gained notoriety in the Slovenian press for showing her emotions throughout the competition; “I am the same person as you see me on stage, I have never been able to hide my emotions and somehow I fail to be more diplomatic in nature. Everything I feel is usually expressed outwardly.”

She began to release solo material in 2013, starting with “Hello” and “Stairway with Diamonds”. While participating in “Slovenska popevka” 2019, she received two awards from the expert commission for the song “Temni Svet” for best interpretation and best overall song.

How did Ana get to Rotterdam?

As previously mentioned, Ana had twice tried to represent Slovenia at Eurovision previously with the Diona Dimm project; in 2004 and 2007.

On 1st August 2019, Slovenia’s national broadcaster RTVSLO confirmed that EMA would once again select their entry for Eurovision, with EMA FREŠ selecting wildcards for the final selection. A submission period was opened for established artists until 18th November 2019, with an expert panel of Raiven, Mojca Menart and Jernej Vene selecting ten acts to participate in EMA 2020 alongside the two wildcards from the FREŠ competition.

On 20th December 2019, the competing artists were announced, among which was Ana Soklič as a solo performer. Her entry, the dramatic ballad “Voda”, was co-written by fellow Diona Dimm bandmate Bojan Simončič. Among the other participants were notable Slovenian Eurovision representatives Tinkara Kovač (2014) and Lina Kuduzović (Junior Eurovision 2015).

EMA 2020 took place on 22nd February 2020. Following all of the performances, it was confirmed that Ana and Lina would both advance to the final round of voting in the superfinal, where Ana narrowly beat Lina’s song with 54% of the televoting. Thus, Ana was chosen to represent Slovenia in Rotterdam with her ballad.

Unfortunately, it wasn’t to be for 2020 – as we all well know, the contest would be cancelled by the outbreak of COVID-19.

RTVSLO confirmed on the evening of the EBU replacement show Eurovision: Europe Shine a Light that Ana would be internally selected to represent Slovenia in the 2021 contest. A submission period was opened for interested composers to submit entries for Ana to perform between 13th July and 30th September 2020. 191 songs were eventually received by the broadcaster, with three songs shortlisted from this selection. A separate jury then picked the song to represent Slovenia from this selection.

The chosen entry, “Amen”, was presented during a special edition of EMA hosted by Lea Sirk and Nejc Šmit, which doubled up as a celebration of 60 years of Slovenian participation in the contest (including as part of Yugoslavia). Soklič and Simončič once again co-wrote the song, this time with assistance from Žiga Pirnat and Charlie Mason, who co-wrote “Rise Like a Phoenix”.

How has Ana been preparing for Eurovision since selection?

Much of Ana’s promotional and preparation for the contest has been in domestic media. Ana conducted a number of interviews with Slovenian media throughout her lead-up to the Rotterdam contest, including with the Slovenian broadcaster RTVSLO.

She shared a snap from a performance at the Cankarjev Dom-Kulturni In Kongresni Center  in Ljubljana with her Instagram followers on April 13th. An a capella version of “Amen” featuring Perpetuum Jazzile was released to the official Eurovision YouTube channel on April 29th.

On 1st May, it was confirmed by Ana and RTVSLO that a new version of “Amen” would be performed in Rotterdam, with the additional of some new gospel vocals and a different arrangement, with the move approved by the EBU. “A fragment has been added to the song, and a piece of this gospel work, which was just an addition to the recording, we then decided to place it in the song itself, in the performance itself, which will also be presented in Rotterdam. “

Ahead of Ana’s departure for Rotterdam, the official Instagram account for EMA Slovenia shared well wishes from previous Slovenian representatives.

Slovenia’s Ana Soklič will perform “Amen” in the first semi-final of Eurovision 2021 on May 18th, performing second on the night.

What do #YOU think of Slovenia’s entry for 2021? Share your thoughts on this article in the comments below, on our forum HERE and on social media!