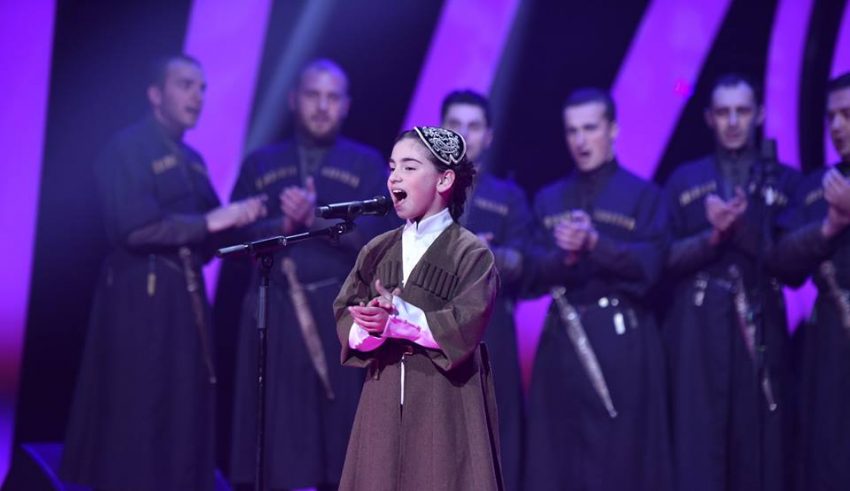 Eurovision fans will have been treated to two separate Shavnabada displays this week, with their appearance as backing singers in Georgia’s Eurovision 2019 entry by Oto Nemsadze, “Keep on Going,” and in the fourth week of რანინა (Ranina), Georgia Public Broadcasting’s method of selection for Junior Eurovision 2019 in Gliwice, Poland, on November 24, 2019.

Four “tours” of different themes will be completed by all ten contestants over the span of eight weeks. The five contestants with the best scores accrued from the three member jury (This tour’s judges are David Evgenidze, Misha Mdinaradze, and Maia Mikaberidze) will move on to the semi-finals, and from there three finalists will be selected for the final where the winning performer and internally selected song will be chosen. After the first tour, Nika Petriashvili, Giorgi Rotiashvili, Keta Akhalbedashvili, and Ana Berishvili lead with 120 points each, earning perfect scores from the judges thus far.

Last week, Shavnabada performed alongside five contestants, with Anastasia Garsevanishvili and Giorgi Gordadze earning perfect scores of 120, with Elene Ivanadze and Barbara Imnadze close behind on 119, and Nika Petriashvili on 118.

Leading up to this week’s Ranina, Shavnabada got a boost in recognition with five of its members appearing alongside Oto Nemsadze in “Keep on Going.” The five members of the Georgian polyphonic folk ensemble who will perform alongside Nemsadze in Tel Aviv, Israel are Giga Chigogidze, Misho Javakhishvili, Roma Giorgadze, Pako Shariqadze, and Davit Tsintsadze. Javakhishvili will be familiar to Eurovision fans, as he was also part of Ethno-Jazz Band Iriao’s entry for Eurovision 2018, “Sheni gulistvis” (“For You”).

“Keep on Going,” written by Roman Giorgadze and Diana Giorgadze and performed in Georgian with the Abkhaz refrain “varada sivarada,” loosely translating in English to “song, my song”, throughout, sees Nemsadze confronted by division. Despite being dismissed and labeled as “angry” and “nationalist” by many lazy Eurovision commentators, Nemsadze’s powerful song is an optimistic and hopeful cry across the divide. “Keep on Going” concludes with Nemsadze, and a previously dispassionate group now finding it in themselves to sing back to Nemsadze and join him in trampling down the barbed wire fence between them. “Follow your heart and walk across the sea, we heal each other’s wounds with singing,” Nemsadze implores towards the end.

Today though, Shavnabada got back to work with the second group of five aspiring Junior Eurovision contestants. As mentioned before, Georgia’s take on Idol and similar singing shows upends the usual show formula kicked off Simon Cowell and Simon Fuller in 2001 by focusing mostly on Georgian language and music, and Shavnabada, a group that accompanies Georgian Orthodox Patriarch Ilia II and works to preserve and a Georgian folklore tradition that had been decimated by the Soviet Union, provides a superb lesson of that tradition. Even if you don’t care for shows such as Idol, let alone the children’s version of it, Ranina is worth watching purely for exposure to musical and lyrical tradition not at all familiar to North America and Western Europe, and also the diversity of sounds within this tradition.

Kicking off tonight’s Ranina, early front runner Ana Berishvili kicked off the evening leading Shavnabada with a superb mid-tempo panduri (traditional Georgian three-string plucked instrument) ballad called “Marebeli.” The 13-year-old’s performance stunned, and earned perfect scores from the judges (to add to her perfect scores from the first tour). Heading into the third tour next week, Berishvili is been noted by many on social media and Ranina’s facebook page as the standout performer to watch out for.

Levan Eloidze followed, making up for his relative misstep on the first tour (his “Edelweiss” received the first tour’s lowest total), with a perfect score leading Shavnabada in the polyphonic a cappella song “Khasanbegura.”

10-year-old Keta Akhaldebashvili followed and led Shavnabada on the slow ballad “Va-giorkoma.” With less support from Shavnabada, a slower tempo, and only a basic panduri track, this was the perfect track for a budding singer to strut her stuff and Akhaldebashvili nailed it, also earning a perfect 120 points from the judges.

Another a cappella performance followed, with Shavnabada starting strong out the gates until 10-year-old from Batumi Tekla Chanagava launched her lead vocal performance and encouraged the audience to clap along in time on “Harira.” And then she launched into an almost-scat like solo and chant that sent the song into overdrive and culminated in rapturous applause, and even judge David Evgenidze got out of his chair to congratulate and hug her. Another perfect score on the night.

Lastly, but only in order of performance, was Giorgi Rotiashvili leading Shavnabada on “You’re a Boy.” Another a cappella performance, and Rotiashvili’s solo right out of the gate got the audience clapping. And you guessed it, good enough for 120 points from the judges. And I only “you guessed it” not because the judges are overly generous, but because of five different approaches by five very different performers that resulted in five stunning performances. If this level of performance continues into the later tours, the judges are going to have a hard time finding a winner.

Portugal’s record in Junior Eurovision since their debut in 2006 has, to be charitable, not been stellar. In four appearances, they have not finished higher than 14th. Last year’s entry, Rita Laranjeira’s “Gosto de Tudo (Já Não Gosto de Nada)” finished in 18th in the 20 country fields.

However, the Iberian nation has made a comeback of late in the adult version, with Salvador Sobral winning the crown in 2017. Portugal have to be confident that they can find similar excellence among their youth and that they will begin placing highly in the junior version as well.

Who do #YOU think is the best performer after two tours of Ranina? Do #YOU think Portugal’s curse at Junior Eurovision can end? Comment below, on our social media, or in our forum.