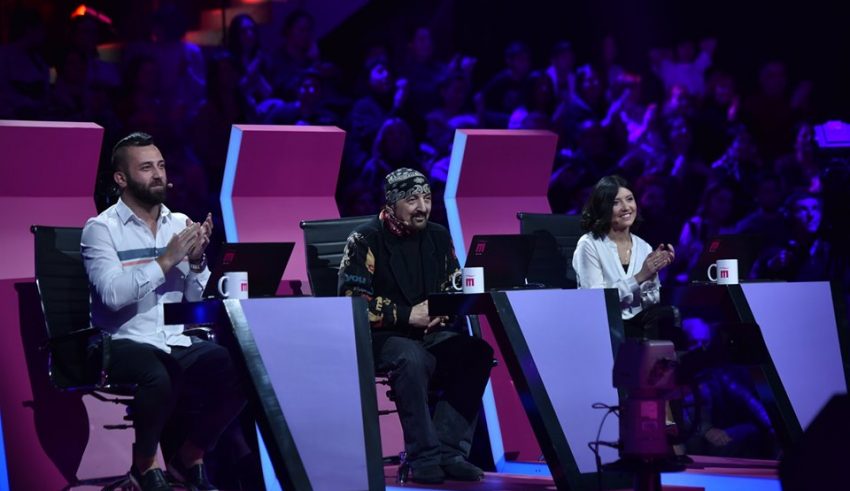 It has come down to this round. After three tough rounds where a lot was asked of ten young aspiring Georgian performers, we head into the fourth and final “tour” where five of the ten Junior Eurovision 2019 potential contestants will face elimination from Ranina, the reality television contest used to select their representative in Gliwice, Poland.

After a musical round, a round where they led Shavnabada band (the backing singers performing through fire and ice for Oto Nemsadze’s “Keep On Going”), and a round where they led the Quintessence Jazz Band, our ten eager contestants lead the Tbilisi Children’s Chapel Choir in ten choral takes on modern songs.

First up, 9-year-old Barbara Imnadze led with a cover of Bruno Mars’s “Uptown Funk.” If you don’t believe me, just watch.

Nika Petriashvili is a favorite for the semi-final for a few reasons: he doesn’t shy away from difficult song choices and has the confidence of a performer double his 13 years. He handled the key change after the flute solo on Elton John and The Lion King’s most famous single “The Circle of Life” well.

10-year-old Elene Ivanidze followed with a choral rendition of Judy Garland’s “Somewhere over the Rainbow.” Ivanidze has been flying under the rader somewhat relative to the other contestants, but she made sure the Fourth Round counted with a strong performance.

I have to admit, I love the moxie of Giorgi Gordadze. The 13-year-old may not be the strongest vocalist of the ten, but the young lad gave a quirky and entertaining rendition of Michael Jackson’s “Man in the Mirror” (most of these performances were set up and done before Netflix’s Michael Jackson documentary hit a couple of months ago, so we can cut Ranina some slack here). An assured and charismatic performer, we’ll probably see him again over the next few years in Georgia. On attitude alone, he deserves a Semi-final spot.

8-year-old Anastasia Garsevanishvili rounded out the evening with her rendition of “Jamaica.” Garsevanishvili had done exceptionally well with two perfect “120” scores thus far, with the youngest contestant again nailing this performance and hitting and holding some high notes.

The remaining five contestants will perform with the Tbilisi Children’s Chapel next week at 8 p.m. on TV-1 Georgia. You can view Ranina live on the show’s Facebook page.

Four “tours” of different themes will be completed by all ten contestants over the span of eight weeks. This tour’s judges are head judge David Evgenidze and guest judges Sopho Khalvashi, who was Georgia’s first ever Eurovision entrant in 2007 with “Visionary Dream,” and Nodiko Tatishvili, who represented Georgia at Eurovision 2013 with Sophie Gelovani and “Waterfall,” judging the contestants in points out of ten on vocals, artistry, involvement, and performance. The five contestants with the best scores accrued from the three member jury will move on to the semi-finals, and from there three finalists will be selected for the final where the winning performer and internally selected song will be chosen.

In Junior Eurovision alumni news, the very first winner of the contest, Dino Jelusić, announced Thursday that he provides lead vocals on Restless Spirits’s “You Know You’re The One.” Jelusić, who won Junior Eurovision 2003 for Croatia with “Ti Si Moja Prva Ljubav,” has forged a career as a hard rock singer, with his touring with American Christmas rock act Trans-Siberian Orchestra and his Animal Drive group’s debut album “Bite!” garnering attention and praise.

His animal drive is not the only one he has, as his work ethic on top of his natural vocal talent has led him to several guest appearances on other band’s records. Restless Spirits is the new side-project from Lords of Black guitarist Tony Hernando. A blend of hard rock and arena ballads channeling the likes of both Whitesnake and Journey, Restless Spirits’s self-titled debut on classic rock Italian label Frontier Records is another project Jelusić was recruited for, with early reviews of the album pointing out Jelusić’s contribution in particular as a highlight. Restless Spirits drops on May 17, 2019 on streaming services and available for download and CD/vinyl sale.

As stressed before, we like to keep an eye out on notable Junior Eurovision alumni to point out the platform it gives to young performers to develop careers not only in their own countries but, as in Jelusić’s case, international careers.

Speaking of Junior Eurovision alumni, we have two going through their first rehearsals at the senior version in Tel Aviv, Israel. Both Belarus’s ZENA and Serbia’s Nevena Božović were up at the Expo Tel Aviv doing rehearsals for the first half of Semi-Final, which both artists are in. ZENA had tried out for Belarus in 2015 and 2016, coming in 3rd in the latter in trying out for a country who pulls out all the stops for Junior Eurovision. Božović placed 3rd at Junior Eurovision 2007 and was part of Moje 3 who failed to qualify for the final in Eurovision 2013.

Božović placed second in ESCXTRA’s press poll behind Cyprus’s Tamta, which Božović should take as a good sign of her prospects. Similarly, ZENA placed fifth, but she’s unfairly been written off as a Debbie Gibson-lite going into this contest, so her placing in the middle in a poll of a group that has not been so far warm to her entry “Like It,” while it’s still clear from the rehearsal some tweaking is required, has got to be seen as a good sign.

But most important for Serbia’s prospects: #YOU thought Božović was best in our Day 1 Rehearsal Poll!

And both ESC United’s Matt and Sean were suitably impressed with ZENA’s initial performance, stating that it is one to keep an eye on. Sean also pointed out ZENA had addressed one of the critiques of her so-called “lightweight” status – the introduction of some “grit” with the use of the dancers, her graffiti print top and box set.

Keep an eye on ESC United’s YouTube channel as Matt and Company keep #YOU up to date on all the goings-on as they happen in Tel Aviv.

Who is impressing #YOU at Ranina as the fourth and final tour concludes? What do #YOU think of ZENA and Nevena’s first rehearsals in Tel Aviv? Let us know in the comments below, on social media, or in our forum.