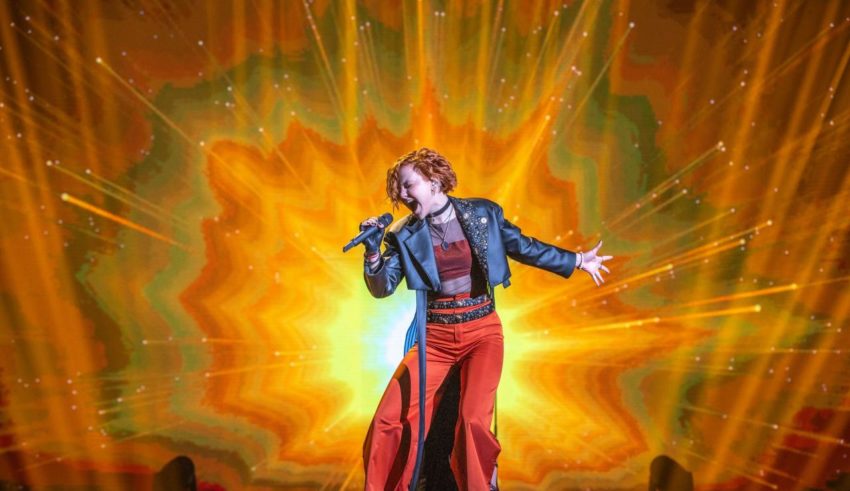 Oleksandr Balabanov improved by coming in 7th in 2020 with “Vidkryvai (Open Up).”

Ukraine held another national selection, with eleven hopefuls competing in the final on October 23, 2021 (one contestant was disqualified due to not obtaining consent of the composer to perform).

Olena Usenko won both jury and online vote, triumphing with “Vazhil.” Daryna Kryvenko came in 2nd with “Kosy-khmarochosy” and Veronika Morska came in 3rd with “Save This World.”

Olena Usenko, born June 18, 2007, came in 2nd at Ukraine’s national selection in 2020. She used this as impetus this year, as this national selection was the last where she’d be eligible. “Living life to the fullest” as the theme for her song was selected as she noticed it was technically her last year as a kid.

She is also enrolled in music school and does work in theater and stage and television.

“Vazhil” was written by Usenko himself with Kateryna Komar. As mentioned, “Vazhil” is about living life to its fullest.

As she told junioreurovision.tv, “fill your life with beautiful moments, be yourself and be conscious of every moment of your life. Time flies, and life is the most important thing that we have. So we must value our life and live it as we believe is right.”

With the background out of the way, here is what we at ESC United think of Ukraine’s entry for Junior Eurovision 2021.

Boris – 8.5 – “An EPIQUE jazz ballad performed by a facial expressions goddess. I would love this in Eurovision proper, in JESC it’s… easily my fave song but also a bit out of place amongst the more child-like entries. Am I arguing that “Vazhil” is perhaps too good for JESC and Olena should have entered Vidbir instead? Hmmmmmm.”

Connor – 8.5 – “This is not a song that I originally liked, and I think that’s because it takes some time to warm up to you. The music video leaves more to be desired, but that’s because this is one of those songs that comes to life on stage. And we also know that Olena can sing the house down, so I expect Ukraine to put everything into this performance to sell the story and her vocals. Plus we love a clap along song at Eurovision!”

James – 7.5 – “A bombastic pop ballad delivered with gusto by an edgy, cool young woman. This could do the business at the adult version as well with its uplifting lyrics based on her own journey of overcoming early career failures and reaching this moment, where she is about to sing for millions on a stage in Paris.”

Melanie – 8 – “Goosebump alert! Can we just take a moment to appreciate the fact that Olena wrote the lyrics on her own? You can really feel that Olena is telling a very personal and emotional story when she sings this song on stage. Her huge stage presence and amazing vocal ability really helps to bring the song to a next level. I just think it’s maybe a little bit too “Dark” for Junior Eurovision. Nevertheless, I foresee a bright future for Olena in the music industry and happy that I can witness the first steps in her career.”

Roy – 7 – “Ukraine went with another strong vocalist this year. She really demands your attention with her presence. That is a good thing, it really makes you intrigued in the entire piece. I am not fully sure whether that pay-off fully gets realised. It is a good ballad overall, but in the end of It all, I am just left feeling that I wanted a bit more from this.”

Stefan – 7 – “The intro just gives me the chills. Ukraine is constantly sending seriously themed songs at Junior Eurovision and this year is no exception. I’m thinking Olena will be alone on stage and that will be way more than enough. But the question is, will the people like it, as this is totally a jury pleaser.”

Tyler – 9 – “Vazhil” is an impressive song that is sung by an impressive performer in Olena. The song presents itself in a mature and a nuanced manner, saying that one should remember from their past in order to move forward on a better path for themselves. It’s quite stunning, and Olena does a great job with the vocals in this popish rockish song. The performance of this could do very well, and I hope it does well in Paris!”

William – 7.5 – “This is probably the most powerful vocal we’re getting. Olena GOES for it. She’s giving us runs. She’s giving us high notes. She’s giving us attitude. This contest will be heavy on pep, so the moodiness of “Vazhil” really stands out. Ukraine should give this as little staging as possible. All this need is light cues and some activated camera angles. Olena will handle the rest. This is good enough to be in contention for the win, but it doesn’t quite feel like the vibe voters will be looking for in 2021. It’s the right song in the wrong year.”

After nineteen countries, ESC United’s writers have declared Italy’s Elisabetta Lizza and “Specchio” as the best entry for Junior Eurovision 2021.

What do #YOU think of Ukraine’s entry? Does this inspire #YOU to live to its fullest? Let us know in the comments below, in our forum, on social media.