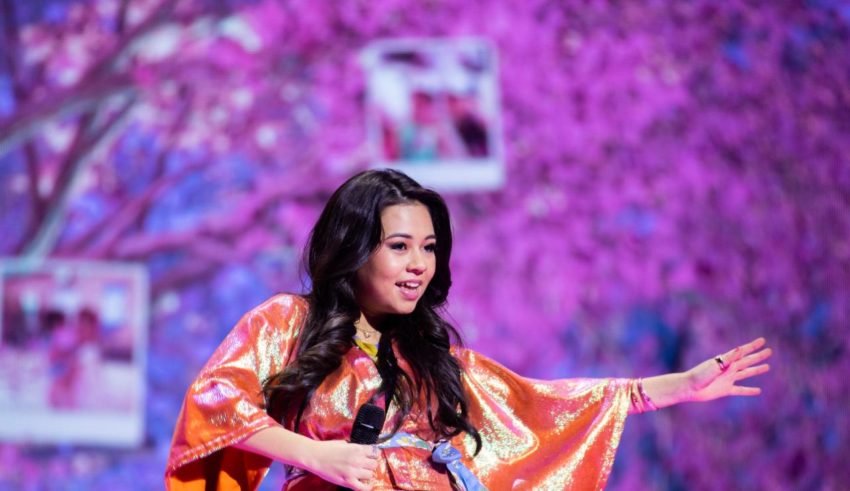 It’s 3 days to go until Junior Eurovision 2021, and we are counting down the 19 nations participating in Paris on Sunday, December 19, 2021.

Today we look at The Netherlands. Thanks to Belarus being booted from the contest, The Netherlands remain as the only country to have participated in every edition of Junior Eurovision.

Despite being in every edition, The Netherlands only won once in 2009 and came in 2nd with Rachel’s “Teenager” in 2011. Otherwise, it’s mostly been middling form. Though with three fourth place finishes in the last four years, you get the feeling AVROTROS is on the verge of achieving the winning formula for the junior version as they got for the adult version recently.

Their one win in 2009 was quality, though. Ralf Mackenbach somehow made a Dutch boy ensemble look fun and authentic despite this formula flopping at the contest several times. “Click Clack” was catchy and fun and appealed to both sides of the kids / adults divide. Mackenbach had stage presence and confidence despite being lumbered with a bad Justin Beiber haircut.

Another Dutch entry of note is Lisa, Amy and Shelley from 2007. Their 2007 effort “Adem In, Adem Uit” came in 11th, but they came back to represent The Netherlands in the adult version in 2017 as O’G3NE with “Light and Shadows.” Curiously, that also came in 11th in the Grand Final.

Femke Meinke came in 7th in 2012 with “Tik Tak Tik,” but later achieved more fame becoming the lead actress in the Dutch Disney Channel’s Just Like Me!

Stefania Liberakakis from Kisses, The Netherlands’s 2016 entry, is now a big deal in Greece. She earned rave reviews for her appearance at the Mad VMA Awards by Coca-Cola last year by performing Daddy Yankee’s take on Snow’s “Informer.” And the Alexis Bledel look-a-like of course was selected to represent Greece at Eurovision 2020 and 2021 with “SUPERG!RL” and “Last Dance,” respectively.

Boy band FOURCE surprised many by coming in 4th at Junior Eurovision 2017, as did Matheu Hinzen’s 4th place finish with “Dans met jou” in 2019 and Unity with “Best Friends” last year.

Ayana Voss emerged victorious in the final, winning the kids jury and professional jury to give her the path to victory, despite being only third in the televote. The kids jury was comprised of the Netherlands’s 2020 representatives Unity, and Junior Songfestival 2020 participants Robin de Haas and Jackie & Janae. The professional jury was comprised of The Netherlands’s Eurovision 2021 representative Jeangu Macrooy, and Dutch personalities and singers Emma Heesters and Rolf Sanchez.

Sh!ne’s “A Million Things” came in 2nd to Ayana, with Priscilla’s “Niet wat vrienden doen” and Priscilla’s “Be Alright” coming in 3rd and 4th, respectively.

Ayana Voss was born on May 7, 2007 in Bussum, The Netherlands. She is of Dutch, British and Japanese extraction, and it is the latter that is of particular significance for her entry.

A member of the Dutch group Kinderen voor Kinderen for four years, Ayana is an experienced singer, dancer and performer.

“Mata Sugu Aō Ne” (またすぐ会おうね, or “See You Soon”) is about missing family members or friends who live in a faraway land, and Ayana channels her Japanese heritage and language here to express that sentiment of wishing she could fly to be with them instantly.

“See You Soon” is written by Dutch pianist, composer, and jazz producer Ferry Lagendijk. A member of Gare du Nord, Lagendijk is an in demand session pianist who regularly works with artists in the United States and the United Kingdom.

With the background out of the way, here is what we at ESC United think of The Netherlands’s entry for Junior Eurovision 2021.

Boris – 5.5 – “The studio version of this is nice. However, “nice” is a word one uses when no other positives spring to mind. The live version of this – at least in the NF version – is too slow to every really captivate me anyway. It was boring, I thought! Cool language combo though.”

Connor – 8 – “I have been excited about this song ever since the songs for Junior Songfestival and I immediately shared it with my partner who loves Japanese as a way to get him interested (it sorta worked). I think that this is the kind of song that can tug at heartstrings and pick up a surprising number of points, especially those with loved ones overseas like Ayana. Plus we know the Dutch team know how to do a good staging. It’s my guilty pleasure and I won’t apologize for such a high score.”

James – 7 – “A sweet ballad, especially poignant for kids now who are missing friends and family. Ayana’s especially so, since she is missing her Japanese family and friends while she herself is living in the Netherlands. This sentiment will connect with a lot of kids seeing as multiracial and multiethnic families are now much more common in Europe and Eastern European kids are missing family settling elsewhere in Europe or themselves settled elsewhere. Either way, it’s a classic light JESC ballad but could do with a bit more of a bang at the end. It tries, but doesn’t quite hit the powerful outro this sort of ballad needs to punctuate its theme.”

Melanie – 7 – “It’s always hard for me to judge the song from my own country. I’m actually very happy The Netherlands tried something completely different this year. (Kisses, Fource, Matheu and Unity followed the same concept) Ayana got a song that really fits her like a glove.I just wished that it was a little bit more impactful. The build is just missing something that makes it an unforgettable moment. Anyway, I’m happy with this new direction The Netherlands is leaning to and hope to see more of it.”

Roy – 6 – “Ayana’s voice is lovely! The backing track lacklustre, as per usual with The Netherland. Cool to have Japanese in the song as well and the staging in the National Final was cool! And that’s about all thoughts I have about this.”

Stefan – 7 – “Once I heard it I just knew this song would with the Dutch NF. It’s different, it stands out and I think both juries and viewers will appreciate it. As we all heard her perform live, my only doubt is the how the performance will look like.”

Tyler – 7.5 – “”Mata Sugu Aō Ne” is a song about wishing to reunite with loved ones from far away, all thanks to this pandemic. It’s a pretty topical song for now, but it still can feel evergreen at times as well. Ayana’s vocals hold up with the different key changes involved, and I wish the song incorporated more of the Japanese language in it too. It’s a good song though and it’s kinda fun, so I enjoyed it!”

William – 9 – “This is the dark horse of the competition for me. It just feels special. It’s the most personal song we have this year, in message and in melody. Ayana has an IT factor, and her live vocals at the national final were confidently solid. Forgive my ignorance of the specific vocabulary here, but I LOVE the little touches of more traditionally East Asian instrumentation, and the big key change moment is KILLER. If the delegation can convey the message of the song through the staging, this could surprise people. Maybe it’s just wishful thinking, but I see this placing very high.”

The Netherlands come in with a respectable average of 7.125. ESC United usually has The Netherlands scored in this region, which bodes well for another Top 4 finish as they are usually an unfavored entry that sneaks up and manages to garner a lot of unexpected jury and online votes.

Twelve countries in, here is how ESC United has the entries ranked.

What do #YOU think of The Netherlands’s entry? Will their deviation from their usual sound result in an improved result? Let us know in the comments below, on social media, or in our forum.