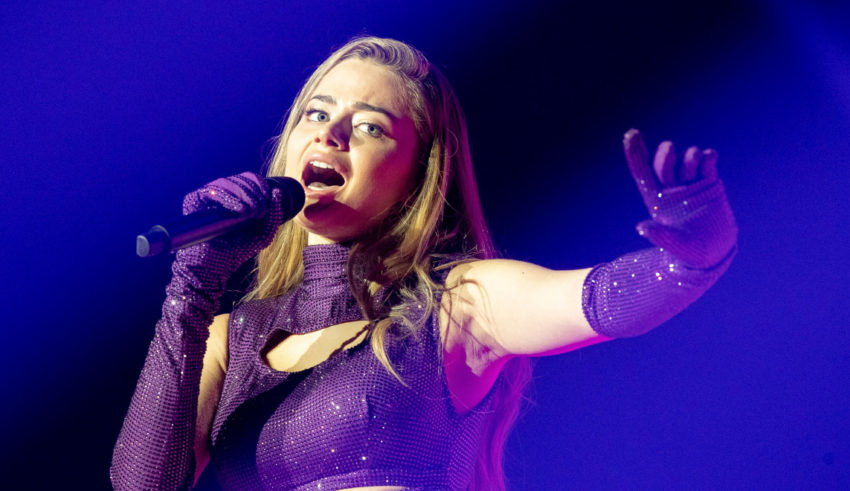 Her heart was born a radical, electric and dynamical. But what was her performance like? Read the report on Greece’s Stefania below!

Let’s start this report how we would normally  end it. This was an impressive rehearsal which received the biggest round of applause from the press centre so far. Stefania was wearing an 80s-inspired jumpsuit, dark purple studded with crystals, and looked confident throughout.

The staging is a flash of purple and gret, with taking us through a metropolitan landscape. We see an infinite amount skyscrapers.

Greece’s big gimmick however is their green screen, which they use effectively. The green screen is used to erase the bodies of Stefania’s dancers, creating the illusion she’s dancing with four empty suits, as opposed to four dancers. It looks rather neat, even in its current, somewhat unpolished state. Later during the act, Stefania climbs up a staircase (also greenscreened) where she serves a couple of Lazarev-like illusions.

Personally, I though the biggest selling point was Stefania herself. The Junior Eurovision alumnus came across as very confident throughout both runthroughs, nailing the vocals both times. If Greece can iron out the minor mishaps with their green screen (dancers’ shadows being visible, at a point Stefania’s mid-section vanished), they have a very good entry for the upcoming Eurovision.

What do #YOU think of Stefania’s rehearsal? Will this dance be her last? Share your thoughts with us in the comments, on our forum HERE or on social media!