Minister of Media Arie Slob has announced on De Telegraaf, said that the Dutch government would allow up to 3,500 viewers per show in Rotterdam, as long as case numbers are low enough. This is part of a trial run by the government and the details are still being further discussed between the government and the organizers of the Eurovision Song Contest.

This news show positive developments for the Song Contest whose prospects for a normal show were swiftly rejected earlier this year. While not the number most people had hoped for, it still bodes well for fans who may witness the most unique Eurovision Song Contest of history.

This trial comes at the heels of heightened precautions including pre-event rapid testing and post-event monitoring. As of the time of reporting, only Dutch fans would be allowed in the audience under this current plan.

Currently, the Netherlands is battling a third wave of the virus. The government will not make a decision until late April. But this is following the announcements last week by Prime Minister Mark Rutte who extended the nationwide curfew and other coronavirus restrictions until late April. 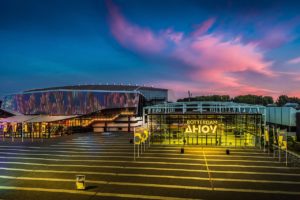 The EBU appreciates these developments and looks forward to working jointly with the Dutch Government.

The EBU has responded positively to the announcement that, if permitted, audiences will be allowed to attend the contest in May.

“We welcome this decision by the Dutch government and the possibility that we can invite fans to join us as we bring the Eurovision Song Contest back in May … We will consider the options now available and announce more details in the coming weeks on how we can safely admit audiences to the Ahoy venue in Rotterdam should the situation allow. The health and safety of all those attending the event remains our top priority.”

The EBU reiterated that:

“As previously announced, all delegations, artists and production crew will be following a strict protocol and would not come in contact with potential members of the audience under any circumstances.”

What do #YOU think of this news? Do you want to go see Eurovision 2021 live in Rotterdam? Share your thoughts with us on our forum HERE or join the discussion below and on social media!