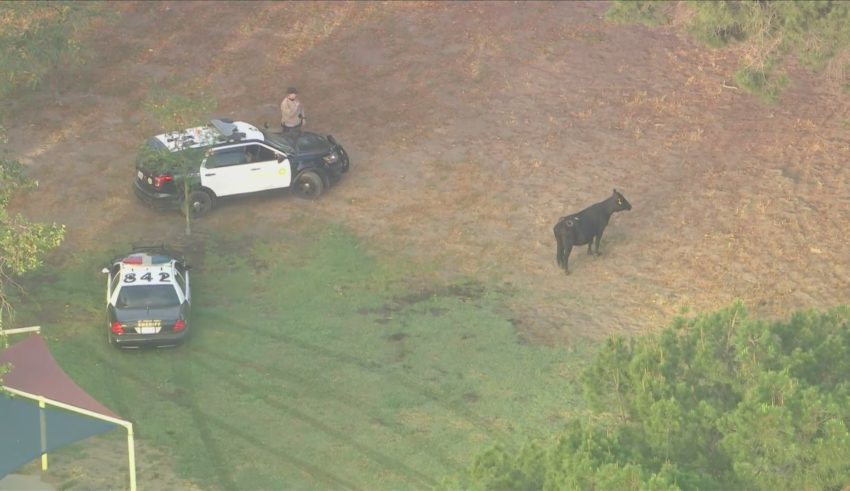 On Tuesday evening, 40 cows escaped from a slaughterhouse in the Southern California city of Pico Rivera. Of the 40, 38 were recaptured within two days, one was shot, and was one eventually found miles away at Whittier Narrows Park on Thursday evening and recaptured.

The last cow to be found has an unlikely benefactor and savior: Grammy Winning songwriter Diane Warren, who also co-wrote the United Kingdom’s Eurovision 2009 entry “It’s my Time,” performed by Jade Ewen, which came in 5th place and is the country’s 2nd best result of the 21st Century.

One cow was shot by a Los Angeles County Sheriff’s Deputy after it allegedly charged at a family of four, but most of the cows that had escaped and caused minor property damage were rounded up. The last cow – at this time still unnamed – will be transferred to The Farm Sanctuary, an animal welfare non-profit located in Acton, roughly 50 miles north of downtown Los Angeles, after California’s Department of Agriculture has tested for and cleared the cow of any infectious diseases.

Upon first hearing the news of the Pico Rivera cows, Warren connected with local animal rights activist Simone Reyes to find a non-profit to take as many in as possible.

“Those poor babies escaping for their lives,” tweeted Warren. “They know their fate. How cruel human beings are.”

This breaks my fucking heart. These poor babies escaping for their lives. They know their fate. How cruel human beings are. https://t.co/x1b0onfA09

The Acton area is home to many such organizations, including Tippi Hedren’s big cat sanctuary Shambala, and The Gentle Barn, who have rescured many cows from slaughterhouses over the years.

After the transfer of the cow from the slaughterhouse, Warren told the Associated Press that “This whole thing, it’s so heartbreaking. Right now, I’m calling it a good moos. A little good moos when there’s so much stuff that isn’t good news. So that was just a little bright spot today.”

Farm Sanctuary is an open to the public animal farm, so if you’re in the Los Angeles area on a weekend, you will soon be able to visit the cow that Diane Warren rescued.

According to Farm Sanctuary’s website, “When you visit Farm Sanctuary’s Southern California Sanctuary, you’ll know right away that it is a special place. Our Sanctuaries are home to rescued cows, pigs, chickens, turkeys, and other farm animals — and each has a special story. Their stories of struggle and survival, against all odds, give us insight into the realities farm animals face in the modern food system and also introduce us to inspiring individuals through their heartwarming tales. Animals who began their lives abused and neglected now spend their days digging in the dirt, basking in the sun, and napping in the straw. Each animal is given the freedom and attention needed not only to recover but to thrive.”

BREAKING: One of the 40 cows who escaped a Pico Rivera, CA slaughterhouse on Tuesday night will be able to live a lifetime of freedom at our Acton Sanctuary! Thanks to @Diane_Warren & @simonereyes for making this happy ending possible. More updates soon. https://t.co/WXMVYZt9rK

But the fates of the other 38 escaped cows are not yet decided, as Pico Rivera’s City Manager Steve Carmona said that the City is coordinating negotiations between several other animal sanctuaries, including The Gentle Barn, and Manning Beef, whose facility the cows had escaped from.

At a news conference yesterday, Carmona said “There were a number of other sanctuaries who wanted to accept not only this cow, but the others that were roaming through our residential streets. And we’re going to continue to facilitate that dialogue with Manning Beef.”

Do #YOU agree that Diane Warren’s adopted cow took the lyrics of “It’s my Time” to heart and stood her ground, showing Pico Rivera what she was made of? Let us know in the comments below, on social media, or in our forum.