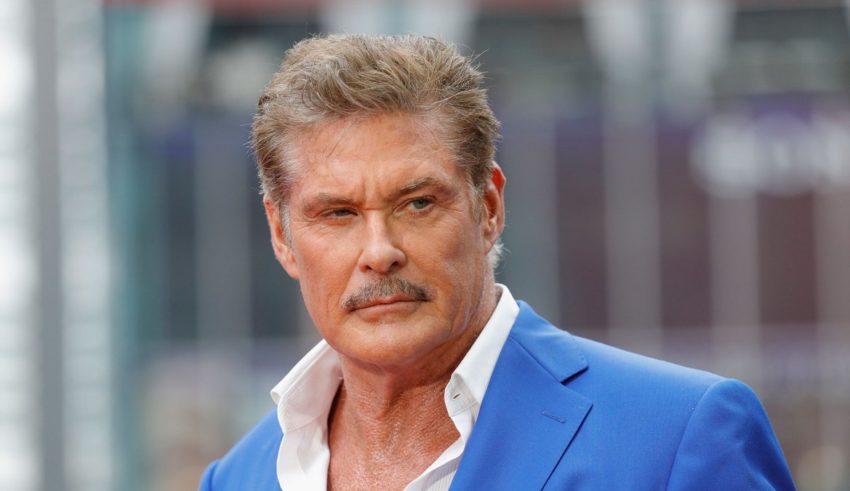 He solved crimes out of a self-driving Pontiac Firebird, patrolled the beaches of Malibu, and helped break down the Berlin Wall.

But ten years ago today, Eurovision fans were excited by rumors that none other than American icon David Hasselhoff would enter the Dutch national selection for Eurovision 2012. So much so that the official Eurovision website ran a story about it.

The weekend of August 12, 2011 was dominated by “Hoff for Eurovision 2012” headlines in the Netherlands, United Kingdom, and Germany, and running in major news outlets like The Sun and Daily Express.

The story had legs because of who the source of the rumor was, that the Hoff had done a Eurovision cover before, and because it’s the Hoff! The man and the meme himself, at Eurovision, what could be more awesome than that?

David Hasselhoff was born July 17, 1952, appropriately, in Baltimore, Maryland, the city of pit beef, John Waters, The Wire, and half the cast of The Real Housewives of Potomac. Not a city whose residents are known for subtlety. The Hasselhoff family, originally from Völkersen, Germany, had settled there amongst the then large German population in 1865.

Hasselhoff went to study theater at Oakland University and then graduated from California Institute of the Arts in Santa Clarita in 1974. It did not take him long to find acting work, and in 1975 he began a seven year stretch playing Dr. Snapper Foster on the American soap opera The Young and the Restless.

Shortly after his character was written out in an overhaul of the show in 1982, Hasselhoff was cast in the lead of science fiction action show that, on the face of it, sounded ludicrous. Playing a cop who was shot in the face in a police raid gone bad, he emerged after plastic surgery as Michael Knight, an agent for a public justice organization called FLAG (Foundation for Law and Government) run by a billionaire tech executive. Oh, Knight worked out of a talking Pontiac Firebird called KITT (Knight Industries Two Thousand), and they went across the country saving lives, punching villains and chasing and being chased by other cars.

If you guessed the car was the smarter of the two, then yes, you’d be correct. There was some shadowy British guy who was a boss of sorts, and a female scientist, and though the show should not have worked and should have ended up on the scrap heap with other gimmick shows like Manimal and The Greatest American Hero, it was a roaring success.

Knight Rider lasted for four seasons, but though successful in the United States, thanks to an unusual marketing campaign by NBC, ended up being larger in Europe and other countries. Hasselhoff regularly appeared on television in his ancestral homeland of Germany, the United Kingdom, Australia and South Africa.

While acting, Hasselhoff had begun a second career as a singer. In 1984, Hasselhoff released his debut album “Night Rocker,” whose cover featured Hasselhoff holding a guitar while standing on the hood of a, you guessed it, black Pontiac Firebird. His debut tanked in the United States, but went to Number 1 in Austria. Undeterred, that’s where the focus of his touring lay.

His second album, “Looking for Freedom,” was released at the tail end of 1988. Instead of an American production team, Hasselhoff recorded in Europe under Jack White (not the White Stripes guy). You may recall Jack White as the German producer who was responsible for Laura Branigan’s smash hits “Gloria” and “Self Control,” re-recordings of songs done by Italy’s representatives at Eurovision 1987.

Diane Warren, the American songwriter who co-wrote “It’s My Time” with Sir Andrew Lloyd-Webber, which was the United Kingdom’s entry at Eurovision 2009 performed by Jade Ewen, contributed two songs to Hasselhoff’s second album: “Sheltered Heart” and “Lonely is the Night” (an Air Supply cover co-written with Albert Hammond).

But it was “Looking for Freedom,” released in March 1989, that gave Hasselhoff superstar status in Germany, remaining top of the German charts for 8 weeks and Switzerland for 4 weeks.

The performance of the song that everyone from that era remembers is the New Year’s Eve concert held at Brandenburg gate in Berlin, where Hasselhoff, atop a crane, sang that song to a gathering of West and East German citizens. East Germans, fed up of the communist regime, began flowing over the border of West Germany in November 1989. By New Year’s Eve, with the wall crumbling and the totalitarian East Germany negotiating its being absorbed into West Germany, revelers had gathered in Berlin to celebrate as a united people.

The image is enduring, and David Hasselhoff’s performance at this historic moment is why he is often known hyperbolically in German pop culture as the man who brought down the Berlin Wall or the man who single-handedly defeated communism.

Hasselhoff returned to the United States as his primary focus, and starred in Baywatch, also serving as the show’s executive producer. Hasselhoff, Pamela Anderson and Alexandra Paul were the main protagonists in a cast of lifeguards dealing with personal and professional issues in Malibu. The first season was critically panned and was cancelled by NBC after its first season.

However, Hasselhoff and the other producers put the show in syndication (leasing the rights to independent television stations rather than the main four broadcast networks of ABC, CBS, Fox and NBC), and after taking it overseas, Baywatch became a cultural phenomenon with two spin-off shows (including one set in Hawaii with Jason Mamoa) and a spoof that was funnier than you’d expect it to be.

The show ran for eleven years and was, according to The New York Times, the most exported American TV show in history with the show having reached 1.1 billion unique viewers during the show’s run.

Hasselhoff maintained his music career throughout the ’90s, and heading into the 2000s had small roles in movies like Dodgeball and was a judge on shows like America’s Got Talent.

During the early ’00s, Hasselhoff’s career could be categorized as “cheesy.” And it appeared he was deliberately steering it that way while relying heavily on the nostalgia for Knight Rider and Baywatch.

In early 2006, there was a concerted Internet campaign to get “Looking for Freedom” onto the British Singles charts. However, Hasselhoff was due to release “Jump In My Car” soon, and the attention switched to that song, which was a cover of the Australian Ted Mulry Gang rock hit from 1975.

The campaign worked, and “Jump in my Car” debuted at Number 3 on the UK Singles Chart.

However, the Internet attention would work against him when a video of him shirtless and belligerently drunk in his home surfaced online.

Hasselhoff continued the reality show route with stints on Britain’s Got Talent and Dancing with the Stars, while also doing more designed to be viral works such as “True Survivor” from the Swedish time-travelling retro-80s comedy Kung Fury in 2015.

A regular port of call for Hasselhoff during the ’90s was South Africa, and he fostered relationships with local musicians and producers.

One such one that lasted over the years was actress and singer Patricia Lewis, who had first interviewed Hasselhoff on one of the many music variety shows in both English and Afrikaans she had hosted.

In 2009, Lewis had recovered from surgery on her vocal cords, and while on tour called in a favor from Hasselhoff: she asked if he could do two duets with her, one being an English language version song called “As I Am” and an Afrikaans language take on a song you may be familiar with.

Hasselhoff and Lewis came together for a version of “Miss Kiss Kiss Bang,” which was Germany’s 20th placed entry at Eurovision 2009 performed by Alex Swings Oscar Sings! (Alex Christensen and Steffen Häfelinger)

The rumor essentially came from Irish songwriter Niall Mooney. Eurovision and Junior Eurovision should be very familiar with Mooney, as he has written many of Ireland’s entries to both contests during the past decades.

Mooney halted non-qualification streak by co-writing Niamh Kavanagh’s second tilt at Eurovision 2010 with “It’s For You.” His standing guaranteed The Hoff rumor got legs.

By August 12, 2011, The Netherlands had not qualified for the Eurovision Grand Final on seven successive occasions. Bold changes were promised by the Dutch broadcaster for 2012, and when the rumor of David Hasselhoff got out, it sounded odd and bold, trying to please both De Topper fans and Eurovision trolls who wreaked havoc by putting up the likes of Dustin the Turkey up.

Mooney told the Dutch press that Hasselhoff intended to enter the Dutch national selection as part of a duet with a female singer, most likely Glennis Grace who’d represented The Netherlands at Eurovision 2005 with “My Impossible Dream.”

Mooney said that Hasselhoff was initially hesitant to consider a tilt at Eurovision, but when hearing some songs by Grace, he appeared eager.

“I let him hear work by Glennis Grace, and his reaction was overwhelming,” said Mooney. “Let’s hope Glennis reacts just as positively.”

Major papers such as The Sun in the United Kingdom ran riot with the Hasselhoff rumor, and fans imagined what short of entry he and Mooney could put together to try make a spectacle at Eurovision all weekend.

Hasselhoff took little time to stamp out the rumor. When Monday rolled, he told The Hollywood Reporter that he would not enter the Dutch national selection with an eye on Eurovision 2012.

“I think Eurovision is a fantastic platform for singers and songwriters to establish careers and make a name for themselves,” said Hasselhoff. “There are some amazing talent(s) that come from this and wish them well but I would never enter this competition as it would be unfair.”

The rumor snuffed out, the Dutch held their national selection without him. Joan Franka’s “You and Me” prevailed in a six song selection (three duels were held with the winners going to the final).

The soft acoustic country ballad about a young woman reminiscing about a childhood memory of playing the game “cowboys and Indians” tugged on a lot of fans’ heart strings, but at Eurovision 2012 did not make the Grand Final, coming 15th in Semi-Final 2, the Netherlands’ eighth successive non-qualification.

“You and Me” has also garnered a lot of flak over the years since due to Franka wearing a Native American headdress for the video and the performance. “You and Me” is often on some fans’ “infamous entries” list due to the perceived cultural appropriation, and part of an ongoing debate not just in ESC fandom, but worldwide from food to literature to sports.

Curiously, this would not be the last time Niall Mooney got involved with the rumor of an unlikely figure going to Eurovision – he was the songwriter who said that he had penned a country punk song for The Sex Pistols’ frontman Johnny Rotten / John Lydon to enter for Eurovision 2018. This time Lydon chimed it that it would be an honor to represent Ireland at the Contest, but ultimately neither song nor singer were selected.

…and we have Iggy Pop again

To close, David Hasselhoff and Maneskin have something in common: the Italian rock winners of Eurovision 2021 roped in the American rock legend for a version of “I wanna be your slave,” and Hasselhoff has covered Iggy Pop’s “The Passenger” for his brand new album.

“Party Your Hasselhoff” will be available on September 3, 2021 worldwide.

Do #YOU think David Hasselhoff could have won Songfestival and carried the flag for the Netherlands at Eurovision? What iconic Hoff moments do #YOU appreciate? Let us know in the comments below, on social media, or in our forum.