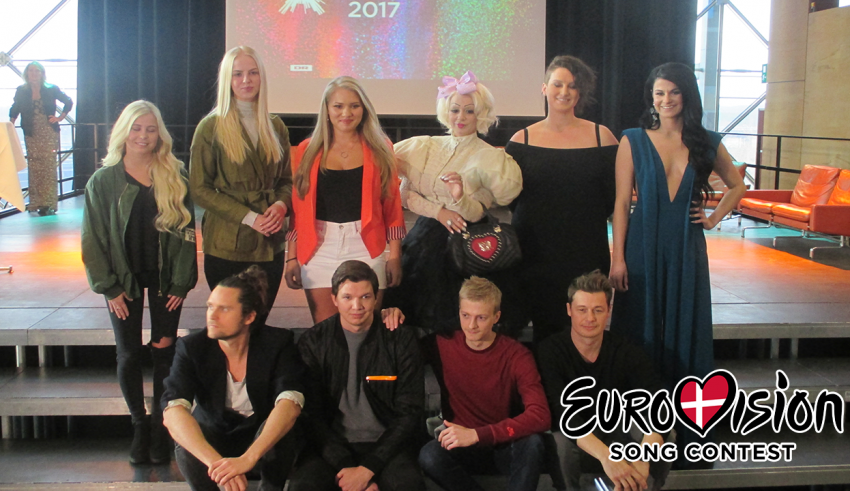 DR has been waiting for this day, and so has the public. Rumors have been floating around on the internet, but now we can officially confirm the 10 names that will take to the stage on the big stage in Herning, and one of them will represent Denmark at the Eurovision Song Contest, in Kyiv.

In recent years, the songs have been leaked around, and it has caused big trouble for the national broadcaster DR, but so far, so good. It is only the 10 artists that will be presented today, while the songs is first expected to be revealed on the 20th of February 2017, unless something unfortunate should happen once again. 5 of the songs were picked through the public submission, while DR picked the remaining 5 songs.

Song #1
Ida Una – One (Music & Lyrics: Peter Bjørnskov & Lene Dissing)
She was found through social media, where she uploaded some videos of herself singing.

Song #2
Thomas Ring – Vesterbro (Music & Lyrics: Thomas Ring)
The only one with a Danish song this year, and a former Danish X Factor Winner in 2010.

Sadly, Anthony was in the United States at the point of the press conference, and could not give an interview 🙁

The winner will be decided by a 50% Jury vote and a 50% Televote. However, the jury will not be a expert jury, with people from the music scene or with journalists. The jury will instead consist of 5 Special Eurovision fans, since DR is more focused on hearing from the more experienced side of the Eurovision Song Contest.

The final will take place in the Boxen, in Herning on the 25th of February.