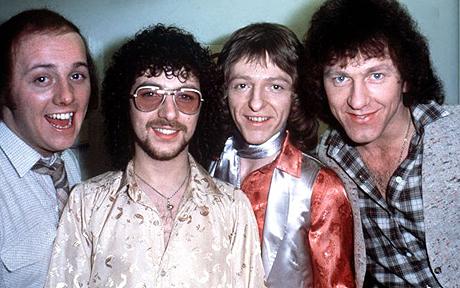 There’s an old French saying that is applicable to anyone going through another annual cycle of watching Eurovision national selections: “plus ça change, plus c’est la même chose,” roughly translated as the more things change, the more things remain the same. What goes around, comes around again. History repeats itself.

So it should come as no shocker to any long term Eurovision fan that we have a plagiarism row in 2019, this time involving Friðrik Ómar and his “Hvað ef ég get ekki elskað?” allegedly plagiarizing Rihanna’s “Love on the Brain,” with allegedly similar chord progressions and vocal styles. Over in Hungary, Médiaszolgáltatás-támogató és Vagyonkezelő Alap (MTVA) actually disqualified Petruska for allegedly plagiarizing Vampire Weekend’s “White Sky.” And there was also the settlement between Eurovision 2018 winner Netta and Jack White for “Toy” allegedly plagiarizing “Seven Nation Army.”

Oh boy, a lot of alleged thieving! Now the point of this editorial is not to discuss the merits, or lack thereof, of specific plagiarism claims or the odds of two composers accidentally landing upon similar sounding songs. It’s to point out that it’s happened before, and it also happened to a British Eurovision entrant who went on to achieve considerable fame, that the band they allegedly ripped off were equally huge, and it occurred before a Eurovision taking part in Israel. So why is the story of the British entrant to Eurovision 1979 and its plagiarism not well known? Mostly because the band involved routinely populates “Worst Band of the 1970s” and “Worst Singles of the 1980s” lists: step forward Black Lace.

It’s usually a good sign for a Eurovision artist’s career that they become more well known for the song they do after Eurovision (see: Dion, Celine). But not for Black Lace, who entered A Song for Europe 1979 and Eurovision 1979 with “Mary Ann,” and were more well known to British listeners because of this 1984 smash hit:

Believe it or not, this terrible novelty song with the nonsensical name of “Agadoo” that was trying to be a fun summer ditty reached Number 2 on the UK Singles Chart in July 1984. It also charted highly in New Zealand, Australia, France, and South Africa. An amazing feat, considering the song elicits an almost fanatical hatred, rivaled only by Scooch’s Eurovision 2007 entry “Flying the Flag.” It is a regular entrant in any “Worst of…” list of the 1980s, and it was kept off the top spot in all those countries by a break out single by one of Western Civilization’s greatest pop stars. I am going to leave that single here because you are going to want to listen to this masterpiece to get “Agadoo” out of your head.

George Michael’s “Careless Whisper” is as seductive and sensual now as it was back then. Though to be fair, “Agadoo” smells every bit as much of dog s%$& now as it did back then. Such innocent times, before we were all rocked by the news that Michael’s partner in Wham!, Andrew Ridgeley, was discovered to be straight. So if any old fossil tries to tell you the music of today is rubbish, just responding with Black Lace’s “Agadoo” should be enough to shut that tired debate down.

Formed in 1974, Black Lace were a group of established pop rock musicians from various parts of Yorkshire. The classic line-up of drummer Terry Dobson, guitarist Alan Barton, vocalist Steve Scholey, and guitarist Colin Routh, formed under the management of Keith Mills, and spent most of the mid-70s doing concert series at British summer resorts, particularly the Butlin’s holiday camps in Filey, Yorkshire and Skegness, Lincolnshire, as well as regular gigs at the Winter Gardens in Blackpool, Lancashire. They hewed close to the American-influenced AM radio acoustic guitar driven soft rock of Bradford’s Smokie, who had success in both the United Kingdom and United States with their 1974 smash hit “Living Next Door to Alice.”

But after winning over the hearts of British holiday goers, it was time to step up to the big time, and Mills had an epiphany – they would use their “Yorkshire band of the Year” accolade by BBC Radio Leeds, and would also hone their soft rock sound to make a push to represent the United Kingdom at Eurovision 1979. As part of this epiphany, songwriter Peter Morris was secured to write a ballad that was Smokie-esque. Problem was, Scholey did not quite sound like Smokie frontman Chris Norman. Oddly enough, guitarist and backing vocalist Alan Barton both looked – under the dim light of the moon on the Yorkshire moors at least – and sounded the part. Morris said he needed a “throatier” singer for the break-up and get-back-together-attempt song “Mary Ann” he penned for Black Lace. So Mills promoted Barton to frontman for A Song for Europe 1979, even though Scholey would continue lead vocals for all other songs.

Black Lace were due to be entered on A Song for Europe 1979 at Royal Albert Hall on March 8, 1979, but as you will notice is a common theme in British preparations for Eurovision in the 1970s, a BBC technicians’ strike meant the show was cancelled. Instead, audio recordings from the final rehearsal on March 7, 1979, were couriered to the judges, and the results were announced the following day on Terry Wogan’s Radio 2 show on March 9, 1979. Black Lace’s “Mary Ann” was the winner of a not very remarkable field of similarly green entries (Guys ‘n Dolls being the only recognizable entry at the time, alongside a pre-fame Nolan Sisters).

However, before they could embark to Jerusalem to compete for the United Kingdom, they were immediately hit with a legal threat: British record label Rak Records threatened to file suit as “Mary Ann” was alleged to be a rip-off of their artist Smokie’s 1978 hit single “Oh Carol.” Songwriter Morris then responded with perhaps the most brazen defense to a plagiarism accusation in history: “Of course we were trying to sound like Smokie!” Morris was remarkably transparent, documenting song notations of both “Mary Ann” and “Oh Carol,” showing that the similarity was in style only. Morris convinced Smokie that they were doing an homage to their fellow Yorkshiremen, not plagiarizing them. Smokie and Rak Records, satisfied (you’ll find out how satisfied later), dropped the matter.

Sorry, I am not going to link “Careless Whisper” again to get this song out of your head. I am, however, going to link you to the Western Civilization defining pop song that kept “Oh Carol” off of the Number 1 spot (“Oh Carol” peaked at Number 4) in May 1978.

It’s like the best thing about Black Lace and Smokie was that they conveniently released their singles when far better singles were at Number 1. So how did “Mary Ann” fare at Eurovision 1979 in Jerusalem? Considering “Mary Ann” only hit Number 42 on the UK Singles Chart and Black Lace’s style of music was already starting to become the subject of ridicule in the United Kingdom and United States, quite well actually. (The Black Lace – Smokie proximity to Number 1 hypothesis breaks down here as Art Garfunkel’s frankly horrifying and depressing song for the film adaptation of Richard Adams’s Watership Down, “Bright Eyes,” was Number 1. Don’t click on that link unless you want to be reminded of a lost loved one and break down crying for the rest of the day.)

“Mary Ann” ended up in 7th place with 73 points, having performed 17th on the night. Israel ended up winning again, this time with Gali Atari & Milk and Honey performing “Hallelujah.” I will not expand too much on Eurovision 1979 here, mostly because I will again in the future due to so many great stories coming out of this edition. Stay tuned.

After Eurovision 1979, the career trajectory of Black Lace improved dramatically. However, due to rapidly changing pop music tastes, Black Lace ended up going the novelty pop route, with “Agadoo” being more of a norm than “Mary Ann.” Other hits include “Superman,” “Wig-Wam Bam,” and “Do the Conga.”

And after the band’s fortunes began to decline, a surprising twist occurred: After Chris Norman left Smokie in 1986, the band figured the best replacement would be none other than Alan Barton. The frontman of the band accused of being a sound-alike was hired! Barton could not get Smokie back up to the heights of their 1970s hey-dey, though Barton did contribute vocals to Roy Chubby Brown’s cover of “Living Next Door to Alice,” which was a parody that doesn’t age too well and is famous for introducing the “Alice! Who the f%$& is Alice?” chant in the pause in the chorus. That version hit Number 3 on the UK Singles Chart in September 1995. Shaggy’s “Boombastic” was Number 1. I will leave that to you if the Black Lace – Smokie proximity to Number 1 hypothesis works here.

Tragically, however, Barton himself did not live to see the release of Brown’s parody cover he participated on. Barton died in a bus crash in March 1995 as Smokie were on tour in Germany. Smokie did continue on with Mike Craft as their third singer, and though they did not have another hit single, they do manage to tour successfully to this day, especially in places such as Russia, where Smokie’s records were smuggled in and played at underground parties during the Soviet era. Allegedly, Russian president Dmitry Medvedev is a huge fan, and “Living Next Door to Alice” is often performed by famous Russian artists on the televized New Years concerts.

As for Black Lace, Dalton was replaced by Dene Michael Betteridge in 1987, but luck and fame ran out for both Black Lace and Betteridge himself, who was convicted in 2015 of benefits fraud. In what sounds like a “too good to be true” story, Betteridge complained of being harassed and bullied by inmates to play “Agadoo” over and over again. As they say, “prison is hell.”

Do #YOU think “Oh Carol!” and “Mary Ann” sound too similar? Or would you rather never be reminded of these two songs ever again? Share your thoughts with us on our forum, below in the comments or on social media!