Home Latest News Because of You: Gustaph will represent Belgium in Liverpool!

The votes are in and Belgium has voted to send Gustaph to Liverpool in May with his joyous song Because of You!

Have a listen here – it’s a real banger! 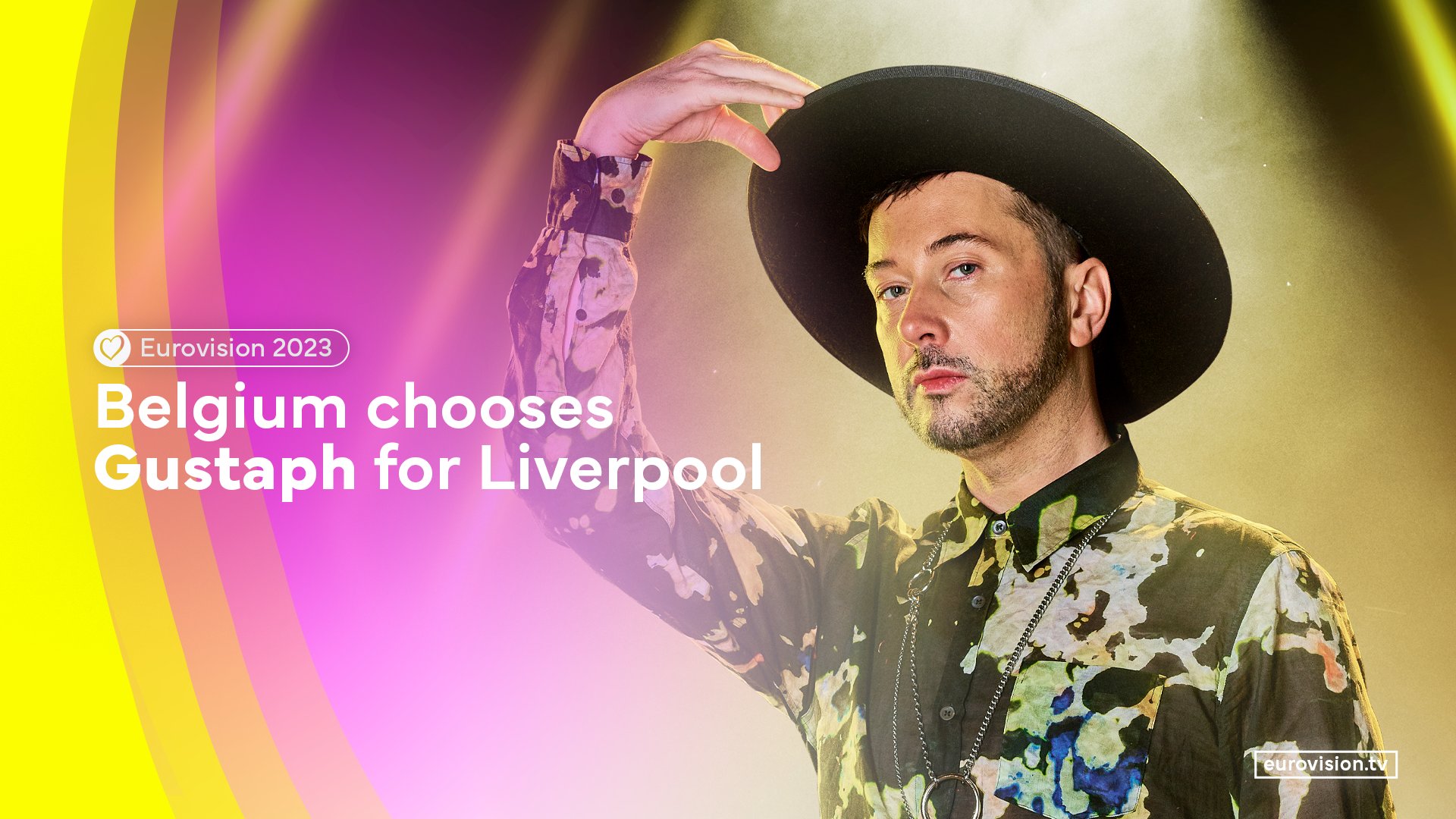 Gustaph is a veteran of the Belgian music scene and finalized his song on the final day of Belgium’s week-long Eurovision fest. He captured 278 points (one point ahead of the runners-up, The Starlings) and could not believe he had won, telling the crowd he was having an out of body experience.

VRT, Belgium’s Flemish broadcaster, is eager to excel in the contest this year, and has been building interest and excitement with reality show segments on each of the Delightful Seven (Zalige Zeven) acts leading up to tonight’s grand final. You can catch up with the past week in the Belgium archives here.

The show opened with the contestants paying tribute to past Eurovision classics including Euphoria, Rhythm Inside, Waterloo, Rise Like a Phoenix, Heroes, Voilà, and Snap before an all-contestants version of Nicole & Hugo’s “Baby Baby” from the 1973 contest. An emotional Hugo was in the audience to accept applause in fitting tribute to Nicole Josy who passed away in November of 2021.

The winner was selected from a combination of panel and public votes, with panelists Laura Tesoro, Jérémie Makiese, Alexander Rybak, and Nikkie de Jager providing encouragement and feedback to the performers. Belgian singer (and winner of the 1986 Eurovision song contest with J’aime la vie) Sandra Kim made an appearance to present a delighted and surprised Jérémie Makiese with his platinum record, Miss You, to the equal delight of the audience.

Tonight’s final held at the Palais 12 in Brussels was the first time we’ve been able to see the stage shows – the “song camp” previews featured the artists alone – and the addition of light screens and backup singers and dancers immediately cranked the Eurovision levels up to 11.

Hunter Falls kicked off the night with a disco-technicolour stage show for Ooh La La in a spangly black suit with a fleet of likewise spangly backup singers. Jérémie Makiese and Alexander Rybak praised the performance with Rybak stating that, even though Hunter Falls performed first, he couldn’t imagine another song making him feel that happy.

Chérine was up next with the 80s synth-pop bop, Ça m’ennuie pas. Her stage show was a neon garden that played up the youthfulness of the song. I fully expect the multi-armed multi-eyed purple dancer (one of Chérine’s “imaginary friends”) to have a full Eurovision career after this. Judges Nikkie de Jager and Laura Tesoro praised the song’s catchiness and the whimsy of the stage show.

The mood abruptly shifted when The Starlings took the stage with their folk-pop song, Rollercoaster. The Starlings went with this song over the song camp-selected Oceanside and the crowd were all in, waving mobile phone lights and joining in for the “na na na”s. Alexander Rybak compared the group to Ed Sheeran, encouraging the group to present their story and to forget about everything else…but it’s a compliment!

Ameerah appeared in a cloud of fog and red feather-clad backup dancers for her song, Carnival. The stage show was visually dazzling. Nikkie de Jager openied her comments with, “honey, that is how you do a show!”

Gustaph kept the momentum up with Because of You, bringing the nightclub to the stage with fabulous costuming, strobe lighting, and vogue. Nikkie de Jager praised it as “RuPaul to the next level”, and Jérémie Makiese was similarly effusive.

Gala Dragot took to the stage for T’inquiète. The addition of lighting and dancers brought out the song’s dark drama. Alexander Rybak, the hardest-working panelist in Belgium, praised Gala’s musicianship, but encouraged her to leave the messaging up to the audience, prompting her to passionately stand by her message to the support of the crowd and panelists. Host Peter Van de Veire waded in telling Rybak, “Some people have a violin, other people have a message”…which is an absolute burn.

Loredana closed the show with You Lift Me Up and bringing Eurovision fans everything we could possibly want: vocals, lights, and a giant, dancing robot. Nikkie de Jager agreed, proclaiming the song “Eurovision in a nutshell”.

While the votes came in, Duncan Laurence performed his Eurovision 2019 winning song, Arcade, but without his signature glowing orb. Alexander Rybak closed out the voting with the once and forever classic, Fairytale to the delight of the audience and the artists.

The votes were delivered with much drama, and it was lovely to see the artists supporting each other as the totals were announced. The final numbers were:

Belgium is the eighth country to select its act for Liverpool 2023.

Let us know what #YOU think about Belgium’s National Final results in the comments!

Enter your email address below so you don't miss out on the latest Eurovision News!