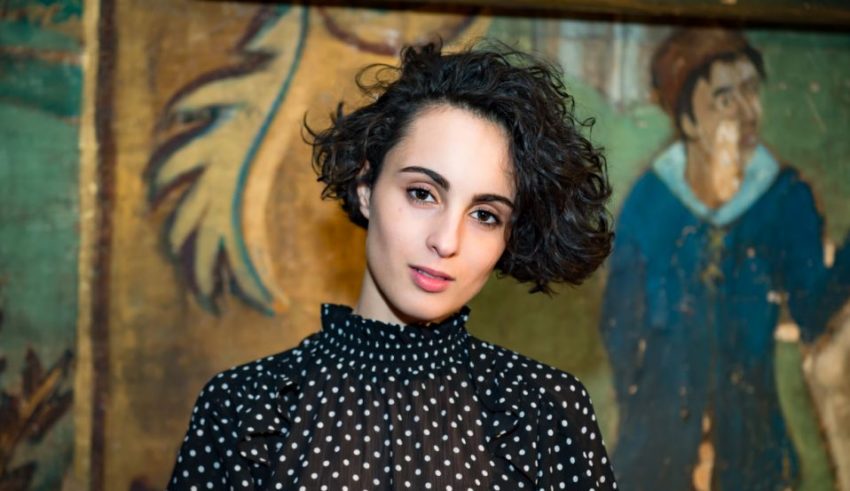 After an explosive show, the Eurovision France, c’est vous qui décidez has chosen their representative for Rotterdam 2021. Barbara Pravi will represent France with a landslide win, coming on top in both the jury and televote.

This year’s return to a national selection comes with a dual stage format. In the first part, all twelve songs will perform their entry and the top seven entries based on televotes will qualify to the second-round as well as an additional entry selected by the jury. During the second-round, the winner will be determined equally by public televoting and the jury.

The duo began with a rather colorful and lively performance. The coordinated dancing and riveting visuals brought so much energy to an already engaging song. The infusion of social commentary and world citizenship was immediately palpable. All terminating with the painted eyes on the hand, it was quite mesmerizing.

The Cabaret-inspired song benefited from an upfront-and-close staging with wonderful gold touches that illuminated the stage. She wore her passion and emotions on her sleeves. The song also benefited from some riveting camera angles and spectacular notes. Those final scenes were straight out of a theater production, quite incredible.

Céphaz “On a mangé le soleil”

Céphaz was radiating just like the bright red staging. The stage wore his name loud and proud as the singer himself sported quite the stylish outfit. The presentation was more focused on the singer which was great for the phenomenal singing quality. Then there was great choreographed dancing and just a fun ambiance all together.

For our three minute trip to the South Pacific, we have Amui bring some Polynesian flare to the Parisian stage. The stage was filled with colors, wonderful dancing and great spirits. The song adding a much necessary variety to the songs today. Amui delivered the song with passion and brought a fun energy.

Philippine is bringing us a song filled with sass and power. The staging was so contemporary and brought a flare of excitement. The dancing also add such dynamism to the performance and filled the stage with such power and energy. Her voice was absolutely mesmerizing between the deep and raspy and the immaculate high notes she would deliver.

Terence has brought such strong coolness to the stage. The choreographed dancing with the Celtic, kilt-wearing back-up dancers was super engaging, but not as engaging as the woman on the rotating ring. This song was such a joy to watch, so many elements, such strong staging, and such great dynamics. The song has such a unique point of view and the judges noted how fun it was to see this performance.

The lighting brought a certain “je ne sais quoi” to this already spectacular song. Despite being a fan-favorite, this song still felt empowered to innovate in the staging and the delivery. This song brings those cabaret infusions with a modern twist that makes it impossible to not take your eyes off the engaging performance. Even the camera angles adds to the drama that this song delivers, this song was an incredibly emotional experience.

This was an electric, color-filled cornucopia. This song brought such a modern staging with style spilling over and captivating dance moves. Did I forget to mention to this incredible geometric horse head in the background. I felt like I was watching something from the future. Pony X had so much charisma and entertainment that few could rival.  This song was a blast and infectious in its beat.

This song got an interesting addition to the beginning which mode the transition even more interesting to experience. It was so nice to see them showcase the Corsican language and elements of their dance and culture. The staging was so engaging and filled with this signature amber shade. This song was a blast to watch.

LMK began by playing the harp in the most graceful and beautiful manner. Then came the drop and this song became like s summer banger. The chic and cool styling with the massive stereo back piece gave you the impression of the fun and contemporary song. The explosion of color that accompanies the rap portions made this such an awesome song to follow and you could not really take your eyes off of it.

I will start off with the impeccable styling and the visual illusion that really brought life to the stage. This worked especially well with the smoke screen which made it seem like a time warp by keeping the smoke inside the structure. It was the electro love song to Paris that we all need in a French National selection and Ali delivered it with all the power and strength it required.

The fun bubblegum pop to end was such a great choice, it leaves you feeling so happy. I am a huge fan of the rotation setting place, it is such an innovative idea and makes the screen seem even more dynamic and animate. The drum solo was also such a unique addition that made the song come even more to live. The cute kiss at the end just added that cuteness factor that we were all seeking.

The eight qualifying acts for the second-round were (in a random order): 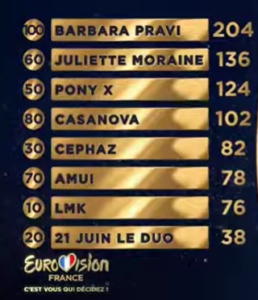 Here is the winning entry.