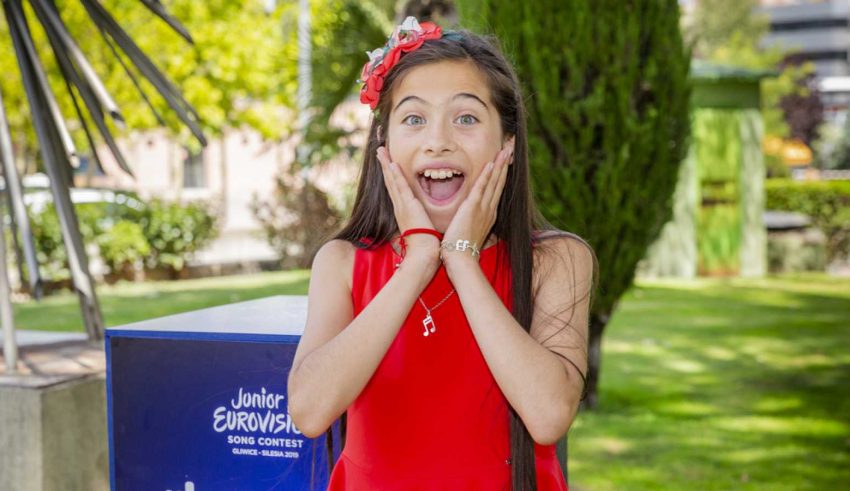 It’s 4 days to go until Junior Eurovision 2019, and we are counting down the 19 nations who are participating in Gliwice-Silesia on Sunday, November 24, 2019.

Next up we check out the returning country that everyone is talking about: Spain.

Oddly enough, the 4th placed performer Dani Fernandez is the most high profile of the four entries as he was a member of Auryn, a boy band that also features Spain’s Eurovision 2020 representative Blas Canto. Auryn made it to the final of Spain’s national selection back in 2011 with “Volver.” “Volver” was co-written by Jonas Gladnikoff, who co-wrote “Banshee” for Ireland’s Junior Eurovision 2019 representative Anna Kearney.

RTVE internally selected Melani Garcia to represent Spain after their long absence. She was unveiled on Maximo Huerta’s TV show “A partir de hoy” on July 24, 2019. And in case you’re wondering, it is the same Maximo Huerta who lasted a whole week as Spain’s Minister of Culture and Sport in 2018 who was forced to resign due to his being fined for tax evasion.

Melani Garcia was born on June 10, 2007 in Valencia, Spain to parents of Argentinian descent. She got into opera at the age of 8, and wants to model her career on that of American soprano and legend Maria Callas. She joined a local choir in Valencia and began teaching herself opera by ordering vocal technique books in the mail before being old enough to begin professional opera training.

Garcia won Spain’s version of The Voice Kids in 2018 and became something of a sensation due to her winning the contest with a very unorthodox (for a kids show) style and taste. Melani has already released two singles and is still training for an adult career in opera.

“Marte” is another environmental message. This one has a twist, though – “Marte” is specifically about water pollution, particularly plastics being dumped in the sea. “Marte” is the planet Mars, where the voices calling out for cleaning the oceans are so loud they can make it to Mars.

“Marte” is co-written by Pablo Mora, the singer and guitarist of Spanish band Lagarto Amarillo and producer and DJ Manu Chalud.

This is what our editors had to say about “Marte”:

Boris – 6.5 – “This probably wins and I’m fine with it. “Marte” takes way too much set-up to really grab my interest, but the last third is a delightfully unhinged operafest, blowing all of the flaws its spiritual predecessor – the insipid “Dear Father” by Laura Bretan – had out of the water, as well as the plastic.”

Connor – 9 – “Let me start by saying this is a great song, and an awesome return song for Spain. It’s clear that Spain wanted to show up strong to defend their reputation at JESC, and this song could do it. Melani has the best vocal ability in the contest as an opera star, but we all know opera-style songs never win the contest if we look at the adult version. Could she actually be the first opera song to take the trophy? I have a feeling she could, but she’s going to need the help of the public vote behind her to do it. I do feel like the high note at the end is just a bit too much.”

Daniel – 9 – “Arguably the most impactful ballad in terms of her angelic voice and the impact of her message. Rather than taking the route of being so literal with the message of conservation, it uses a metaphor in a more adept manner. Did I mention her voice it is out of this world (get it!). Welcome back Spain.”

James – 9 – “Pop opera when done well may not have won a Eurovision contest, but when it’s done well, as many competitors over the years have done, it’s come near. Melani is a show stopper and she has a song perfectly set up for her to deliver fireworks: a slow opening third, a little ramp up for the second third, and then she is unleashed for the final third. Considering the thought and care going into her training regimen, the result of JESC 2019 will be neither here not there to Melani. This is one step in her development, and unlike other pop opera teenagers (* cough * Bretan * cough *) is willing to restrain herself and not blow out her vocal chords for a cheap shot at teenage glory. She and her parents have the long term view in mind, and while we can look forward to hearing her at her artistic peak in 20 years, we should be privileged to hear what awesomeness she has to offer at her current age.”

Melanie – 8 – “This girl can SING!! Those high notes are amazing and I’m happy that we see this kind of Pop Opera in Junior Eurovision. The song itself has a great build too and it keeps you interested for the full song. I seriously  think that that high note will be a memorable moment on stage. Hopefully she can kill it live as on the studio version.”

Roy – 6 – “I know that there is a lot of hype behind this song, but I am not on board with this train. I just think that this song is saved by Melani’s operatic vocals at certain points of the song. I also love her pronunciation of the word “Luz”. For the rest, the orchestration of this song is very poor in my opinion. It is nothing special at all and it uses a trick that I highly dislike in songs. The fact that there is no payoff after the first chorus is something that can really leave a bitter taste in my mouth. Melani has a great voice in the higher pitches, but I am not a massive voice of her regular voice, that is just a personal nit-pick and I don’t really discredit the song for that. I just don’t think this is a special song at all besides the ending maybe. Another very basic and underwhelming orchestration paired with a really great singer.”

Sean – 5 – “Another favourite here, which just proves a point that a lot of Eurovision fans have a weird affinity for popera. But no matter… Melani García obviously has an impressive vocal and the song has a good message and structure, but it doesn’t do much to hide the fact we’ve heard a song like this a million times before in different clothing. Not for me.”

Stefan – 6 – “She is such a cutie and that AMAZING voice! So, lets round it up, singer – check, song – check, lyrics – check, overall expression – meh. Don’t know why, but besides her voice, there’s not much that’s keeping me interested. And I disregarded the “let’s save the planet” message. ”

Seventeen countries in, here are our current rankings:

There’s one clear message to Melani here – move to the United States. Our three USA based editors averaged 9.0, way above the 6.3 offered by the European contingent. “Marte” still ends up with an average of 7.3125, which is a very good average across eight contributors to a Eurovision blog. France’s Carla still sits atop with 9.0, which is where Melani would be if it were not for those pesky Europeans wanting to grade a European on a European song contest. We shall see if Ukraine or Wales can top her score.

What do #YOU think of “Marte?” Do #YOU think this will soar and take flight or sink like a stone? Let us know in the comments below, on social media, or in our forum.